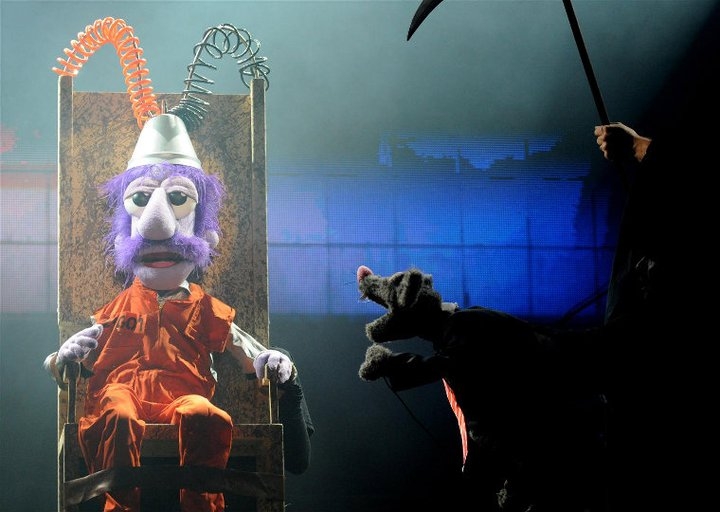 Red Band, an Israeli/American puppet group that mashes together Spinal Tap and the Muppets, began a few years ago with the puppet folk revival, a street act with the muppets that was picked up for television as Redband, a mockumentary TV show that followed the comeback of the band lead by Red Orbach, who doesn’t understand the summer of love is over in Israel. In each episode they met up with different famous Israeli musicians in order to jam, and every time sex, drugs, banana magazine, illegitimate children, and generally anything that Kermit would never, ever do happened and then wrapped up with a cover song and a group therapy session. It’s the funniest shit you could only get away with in Israel on cable and mostly in English because Red never bothered to learn Hebrew. The three seasons of the Redband show can only be seen in fragments on YouTube or Israeli cable’s HOT on demand but the band is playing live gigs across the country and in Berlin this summer and beyond.

HEEB caught up with the band shortly before their gig at Berale in Kibbutz Lehavot Haviva. This interview is no Sesame Street but Red was kind enough to give HEEB a shout out.

How are the live shows going and how many albums do you have now?

Red: Okay, that’s a lot of questions, why dont you take your bra off and relax. All will be revealed. by which i mean my balls.

The live shows are going amazing. I don’t think people realize how much fun they are going to have before they see it. Some people are jaded and skeptical, they are like, “really?” the answer is yes, really. This shit is real yo. Its a trip. ask anyone.

Lefty: Art and farts. You asked us a question and we bring you the meaning of life. You’re welcome.

Redband history seems vague to me on the show, the word comeback is used a lot, what exactly did you guys comeback from? I heard that Redband used to jam a lot with Blues Rosh Pina?

RED: First of all I don’t know what blues rosh peanut is. Frankly, it sounds made up…Second of all, fuck you. Ask your fucking parents! Before you were born I was considered a god among men. I was as big a star as this shit hole ever saw. Suddenly, with the blink of an eye, and a whole new generation of disrespectful assholes like you was born ,who don’t remember anything before the internet.

Lefty: And just so you know… when Red says fuck you he doesn’t mean to hurt you… it means he really wants to penetrate you over and over again… in a sexual way… like when a man hits a woman on the head and has his way with her in a dark cave

Poncho: Hey Lefty… 1921 called and they want their cave back.

Lefty: Caveman existed way before people starting counting the days because someone really cool died or something..

Poncho: Lefty.. life is not about the eggs… it’s about the omellete. so I win. who’s hungry?

You’ve burned some bridges with a lot of famous players in the Israeli music industry, is there anyone that you like playing with?

RED: I only enjoy playing with myself. Wait, dont quote me on that.

What do you guys think of Israeli hipsters?

Red: I assume so. I mean who wouldn’t? If you could do your job naked, wouldn’t you?

Poncho attempted suicide after Red slept with his girlfriend, how effective has group therapy been for the band?

Red: I was skeptical about group therapy…but I cant deny that it gets results. For example, a lot of bands have a pre-show ritual, it unites the band and energizes everyone before the show. We always considered this to be totally gay. I mean, what’s the point of this ritual? What are we children? just do your fucking job, and don’t fuck up! But the sessions with Dr. Neuman really opened my eyes. Now, before every show, we have 25 minutes of intense eye contact, followed by sharing time, then we get a massage circle going…bottom line, we take three hours to get ready for a show, but its worth it. The numbers speak for themselves…we only had 3 band stabbings this year and only 2 suicide attempts.

I see that Red tried to circumcise himself, is Red not Jewish? Has Red ever been to Ulpan or tried to learn to speak Hebrew?

Red: I went to the Ulpan once. All I learned there was how to get crabs. The only Hebrew i know is stuff I pick up from conversation, like, “tafsik”, “lo sham”…and “hazilu”, which I assume from the context is some kind of thank you.

Lefty: Well we do have an identity crisis going on. we are doing a show in Berlin this August. we hope to rediscover our roots in a place famous for tragic events which influenced our lives deeply and painfully.

Poncho: Is Berlin the place where John Lennon was shot back in 79?

Lefty: Well I was talking about the invention of the sausage… but now that I know that Berlin killed John I don’t think we should go

Is Philip still scoring for you guys? Does he ever have problems with cats?

Phillip: You are of course referring to the mere fact that I’m a rat in my ethnicity, which is mildly racist. i would have you know that i am both an accomplished lawyer, accountant, chemist, and pharmacist, and am fully qualified to score anything and everything you need. and by the way i’m very attracted to cats, sexualy. its a pleasure/pain thing. do you like to be scratched?

Is there anywhere else your management is getting you shows?

Lefty: At the moment our management is undergoing an experiment supervised by Phillip… they are trying to determine how pot affects managers while they try and make fast business decisions… the results are not in yet but it seems they are all getting fatter and are developing a fear of answering the phone. so I’ll answer your question with another question… can a stoned man shoving pizza down his throat really GET you anything?

How about coming to the States?

Red: Depends what state, and what the statutes of limitation are in said state. But given that it’s not one of the 5 state where I have an open warrent for my arrest, we would love to come to the states! Give me a plane ticket! Im crashing on your couch!

This interview for your little fake magazine is over! I would love to sit and talk with a fan about myself, but i have a little thing I call a life to get back to.