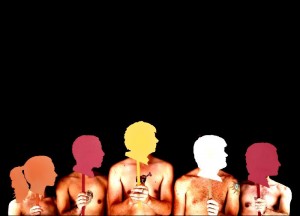 Once upon a time in a mystical place called Long Island, a little Jewish boy named Sam Bing fell in love with a New Wave radio station called WLIR that opened up his mind to all sorts of new sounds and ideas. He avidly listened to DJs Donna Donna, Larry the Duck and Malibue Sue spin the soundtrack to his youth, until one day he moved away to sunny California. Years later, he returned to the Island, only to find that the station was gone. Highly distraught, with a copy of Pale Fire by Vladimir Nabokov under his arm, he fell asleep in the home where he grew up. That night, he dreamed that Nabokov’s fictional villain John Shade was the real reason behind his beloved radio station’s demise. But wait! The station wasn’t gone forever- it was just underground, forced to conceal itself under Shade’s oppressive rule.

The next day, Bing awoke to find himself saddled with a mission: to defeat the evil John Shade with the enigmatic, avant-garde indie pop album Part I: John Shade, Your Fortune’s Made. Together with band mates The Booksman, Gmo, Julian Wass, Patrik-Ian, and Sinosa Loa, they are Fol Chen–creators of the most whacked-out concept band since Gwar.

On July 6, they are back with the second installment of their mission, Part II: The New December. John Shade has been defeated, but, according to front man Bing, the world is “a terrible mess.” The album represents the band’s efforts to clean it up, and have some freakin’ fun while doing it. Despite the kooky premise, cheekily crafted bangers like “In Ruins” and “C/U” deserve a place in any summer playlist. Gearing up for an eight-city showcase, Bing took the time to chat from his L.A. home.

So when I Wikipedia’d your name, I came across another Samuel Bing who was a turn-of-the-century German art dealer in Paris who was a key figure in the promotion of Art Nouveau. Any chance that he’s the inspiration for your stage name?

You know, I discovered the same thing via Wikipedia. I wasn’t aware, but I like the connection anyway. Don’t worry, I’m not gonna try to sue his estate or anything.

Like so many performance-inclined Jews before you, you’re from Long Island. How good’s your accent?

Yeah, Long Island. It’s reviled by the rest of planet. For a small chunk of my adult life I actually denied being from there. If someone asked me where I was from, I would say New York, which was technically true. But it was a lame ruse, and inevitably there’d be a follow-up question, ‘Oh, where in New York?’ And then the jig was up. Are you guys in Brooklyn?

So you guys probably hate Long Island also.  It’s definitely a love-hate if you’re from there. At best it’s love-hate.

Tell me about your Twitter account. You have a bunch of cryptic song lines up there. Is it an important creative outlet for you?

Yeah, I’ve really been enjoying that part of the narrative world.

I noticed lyrics from the song “In Ruins” up there. I was wondering if there’s a story behind the line “You look good by siren light?” Did you like, meet someone at the scene of a crime?

Honestly, the story is that the line just occurred to me and I texted it to myself. I thought it would be a good line for the song, and thank god I had my phone with me.

It’s the 2010 version of writing shit down on your hand. Your website has a bunch of crazy alternative-narrative type stuff on it too. There’s the 1984-esque video of “In Ruins,” the letter to DJ Donna Donna, the weird optical illusion that I’m pretty sure isn’t an actual optical illusion… is it?

The New December is part two of this big concept story behind Fol Chen. How will the story continue in this installment?

If you imagine our work so far as a movie trilogy, we would skip from movie one (John Shade) to movie three (The New December). So part two is really part three. Movie two would be the really exciting, action-packed movie where the clash between good and evil happens, and evil is vanquished. We’re skipping that movie, past the action-packed part to when the good guys have won, but it’s a terrible mess. It’s not post-apocalyptic, it’s just post-victory. But in a way that’s less celebratory than one might imagine. It’s the anti-climax, I guess.

Yes. The good guys win, at least in name, but there’s just a terrible mess to clean up now. 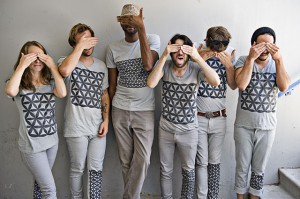 Wow. I’d really like to know what kind of chemicals you use to come up with that. But anyway, you guys covered “The Beautiful Ones” by Price and Pink Floyd’s “In the Flesh.” If you could have one band cover you, who would it be?

Damn, I’d have to think about that for six or seven hours. Kate Bush! I want Kate Bush to cover Fol Chen, make sure it happens.

I’ll do my best. So you’re signed to Asthmatic Kitty, Sufjan Steven’s label. He’s actually our neighbor in the building. Do have any ideas about pranks we could play on him?

I mean, how mean do you want the pranks to be?

As far as you can go.

Well he does actually own the label so I probably shouldn’t encourage anything cruel. To be completely frank, I have not had any contact with the man ever. I only mention that because it’s hard to give any really detailed, specific prank ideas like, ‘Oh, he hates mustard, so go and put mustard all over his chair.’ Actually, you should just go ahead and do that anyway. I don’t think anybody would enjoy that. Tell him it was Samuel Bing from Fol Chen. He’ll be like, ‘Who?’

An Interview with Ariel Pink