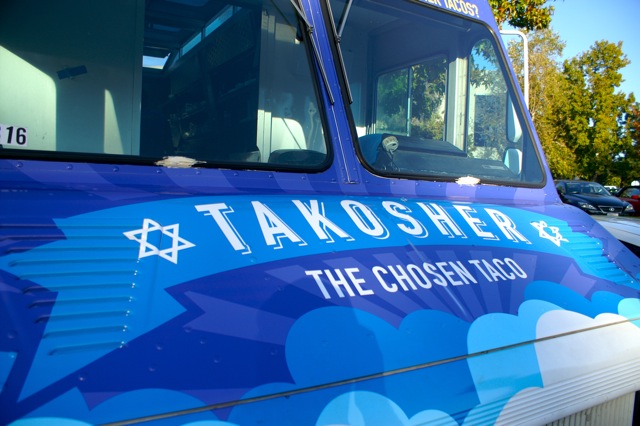 With food trucks in Los Angeles doling out everything from Korean tacos (Kogi BBQ) and Gumbolaya (Rajin Cajun) to ‘Frank Behry’ ice cream sandwiches (Coolhaus) and fried chicken with waffles (Buttermilk), it was only a matter of time before the Jews joined the fun. While we haven’t seen kugel or dafina on wheels yet, the people who’ve been eating food on the move since the Exodus are finally joining the cavalcade of ethnic eateries.

Among the top contenders currently vying for Semitic stomachs are  Takosher, a kosher Mexican truck, and Schnitzel Wagon, a spinoff started by former employees of the ever-popular Schnitzly restaurant. The famed Canter’s deli has also entered the scene, however,  their truck, like the restaurant, has no kosher approval (which means you can choose between a reuben or a bagel with cream cheese and lox). Only Schnitzel Wagon has the almighty seal of approval from ‘Kehilla,’ the most revered kosher approval consortium in Los Angeles. Takosher’s certification comes from the respected Rabbi Kelemer in Santa Monica, but for die-hards they might as well be serving kosher-style pork.

In fact, with items like the trademarked Brisketaco™ or Latketaco,™ the menu at Takosher reads a lot like a gimmicky, Jew-y version of Mexican, but does it deliver, so to speak? Ordering from the blue and white ‘chosen taco’ truck does make you feel special, but the famed brisket is on the dry side, the latke cloyingly sweet, and most offensive of all, the accompanying tortilla chips are store-bought (as far as I know there is no injunction in Jewish law against making your own).

The Schnitzel Wagon is more promising—if you can find it. They’re known to peddle their crispy schnitzel sandwiches during their Yeshiva runs off Beverly and among Fairfax Village. But they don’t always update their Twitter feed, relying instead on the original and still more powerful trending tool Jews have perfected over the ages: the gossip circuit.