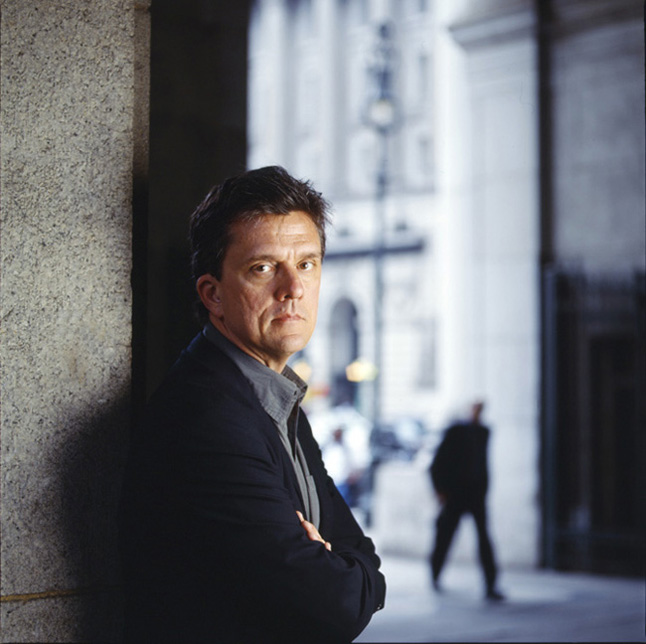 When the going gets tough at Heeb, I turn to a quote that I once found in an article that Kurt Andersen wrote in New York Magazine: “Reading a great magazine is like reading a great book, with the clear sense that a skillful control freak with a Big Idea is in charge.” I don’t know what it says about me that I haven’t found any words in the entire Jewish canon to be as useful, but it’s the truth. Words are Andersen’s business from his novels Turn of the Century to Heyday to New York, SPY and Vanity Fair magazines to his radio show on NPR, Studio 360. I’ve long wanted to meet Andersen and my dream finally came true this past summer when his recent book Reset came out. The premise of the book is that the current economic decline is best understood in a larger framework of American financial ebbs and flows and that recognizing it as such provides us with a greater opportunity to respond creatively. I spoke with Andersen over drinks at the SoHo Grand Hotel to talk about the book and the ebbs and flows of his own writing career.

At a recent B&N reading you said you weren’t quite as optimistic about the future as people were painting you to be.
Well, I probably made a mistake in doing that cause I know in things like that, where its just an extended sermon, you’re really just supposed to repeat your points and I started to hedge them, which was sort of a mistake. However, I was just trying to suggest to this audience of a thousand Regina Spektor fans—97 percent of them had no idea who I was or what I did— that I wasn’t just an earnest preacher, that I’m not a Dale Carnegie/Norman Rockwell, like ‘Everything is great!’ guy.

But you do, ultimately, believe in American exceptionalism.
Well, that’s funny. I guess I do. I mean America has worked out reasonably well so far. I guess I do. Had I not spent the previous several years researching and writing novels about the 19th century, and really thinking about and reading history so much…. As I said at the Barnes & Noble event, I’m sort of wired to be sort of 51 percent optimistic. I can be as depressed as anybody else when I read in the NYT today about families, people upset about the President of the United States going to speak to public school students, and that’s some sort of controversial thing. I read things like that and I just think, there are a lot of crazy people in this country and maybe we should have 2 countries.

The experience of writing Turn of the Century and Heyday really had a big impact on your thinking?
Yeah, reading about and thinking about history, and sort of living in another time in my head for so long, combined with turning 50 and beyond 50 now, all converged to make me take the relatively hopeful, long view of what we’ve just been through. So I can’t really think of any unexpected reactions to the book, but the absolutely repeated reaction when I go on radio shows and TV shows and stuff is, ‘Well, we went through the oil crisis in the 1970s and we didn’t stop driving guzzlers and we didn’t get our energy house in order and blah blah.’ I don’t think America is beyond redemption, and we’re too fat and lazy to ever change, but that is essentially the reaction. And I get that, partially of course, because we’ve been going down this one path for 25 years, so it’s hard to imagine that it’s not the permanent state of affairs. And anything is possible. I could be wrong and we’ve begun our decline already and we’re not going to swing back. But truly, I would bet that we’re going to swing back and this is the beginning of that swing.

To what extent do you think that message is all too different from the President’s message: ‘Never squander a crisis’?
As soon as I heard Rahm Emmanuel saying that last November, I thought, ‘Man he is so right.’ However, he shouldn’t have said it. It’s too transparent for a political person to say. But I mean that’s my belief. When does a person quit smoking or start to lose weight? When they have a heart attack or when their doctor says they’re about to have a heart attack…I shouldn’t say this, but part of me wishes that the crisis didn’t seem to subside so quickly. I mean don’t want everything to go to hell and I don’t want my investments to be worth nothing and my house to be worth nothing. However, I do want, within manageable reason, enough to shock people into saying, these ways of life are not sustainable.

Alongside that sort of historical analysis, there’s this kind of coming-of-age story in the book, as well. America is waking up from 30-some odd years of an extended childhood. In a way, this is a story of the baby-boomer generation—and you even have Tom Brokaw writing the forward for a book about the not so greatest generation. Not to psychologize the whole thing, but to what extent is this book an attempt to come to terms with your generation’s failures?
A part of me has always felt sort of outside the archetypical baby-boomer sensibility and history. There are all kinds of great results of all of the cultural and political changes of which the baby boomer generation were vehicles, beneficiaries, and the whole bit. But I do think this kind of spoiled-brattiness has some serious downsides like the fact that the counterculture wound up enabling the worst excesses of Wall Street.

How did that happen?
Well, essentially if it feels good, then let’s do it: Let’s Party. Let’s not worry about tomorrow.

That was always a sort of Right-wing critique of the 1960s.
The hedonism thing? Yeah, and I think both have a lot to answer for. On one hand, the counter cultural Left is freaked out by the idea that one of its results 40 years later is what we’ve been through the last 15 years or so, and I think that the right, the Wall Street Journal editorial page, the perpetual critique of the 60s and its heedlessness and fecklessness and irresponsibility, I would say that the deregulatory, grab it while you can, ‘I got mine, Jack’ frenzy of the last 10 or 20 years is connected, and was enabled by, some of that counter culture stuff (shorn of its Socialism). But I do think turning 50, I don’t say that as like, uh oh I’ve come to some mid-life moment, although perhaps I have, I just mean that I’ve lived enough years that I feel as though I’ve actually existed in this country and on this earth for a solid historical unit, a half-century, more than a half century. And that combined with spending a lot of time thinking historically led me to sort of look at where we are now in a historical fashion. I will leave the psychologizing as to what it represents in my own blooming or coming of age to others.

Fair enough. This isn’t one of those ‘paradigm shift’ arguments, is it? You say that these historical phases are going to continue.
That’s my hunch, my belief. Again, I look at what has happened… swinging back and forth. Civilizations come to an end and maybe at this point it doesn’t swing back it just keep swinging this way, and then, my poor children and grand-children.

No longer sounding optimistic right?
But again, my strong hunch is…the exception is to say, well yeah, we’ve gone back and forth before and things have gotten good again and its part of the wonderful dialectic dynamic, but this time we’re fucked. Possibly, but I don’t think so.