Remember when video games mostly featured Italian plumbers leaping over barrels to rescue princesses? Well, now the teenaged boy’s favorite medium is also as a great outlet for all your Mid-East anger — and a good distraction from actually tackling those problems. Here’s are a few examples of frustration and rage transformed into murderous bits and pixels through today’s gaming technology.

Hezbollah developed Special Force, in which a first-person shooter takes part in various military coups against the Israeli state. The package reads: “Fight, resist, and destroy your enemy in the game of force and victory!” Players not quite ready for all-out intifada can run the training simulation and practice shooting various Israeli officials. 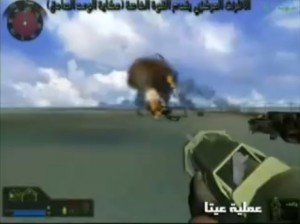