President Barack Obama had “Hope”
(Fictional) President Jed Bartlet had “Bartlet For America.”
Robert Ransdell has “With Jews We Lose.”

…Not exactly the riveting campaign slogan of a born statesman.

Ransdell, a write-in candidate for the Kentucky senate seat currently held by Mitch McConnell, has plastered signs featuring his, uh,  thoughtful distillation of the issues facing the good people of the bluegrass state, along U.S. 25 in the town of Florence. As reported by WLWT News, Ransdell has twenty signs scattered across northern Kentucky, with plans to add 200 more. The signs themselves appear to be a combination of standard block font, and shitty 6th-grade-science-fair sharpie work. 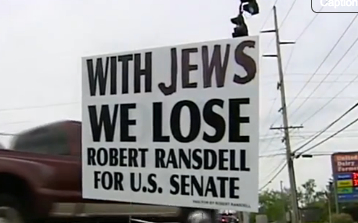 “Online we have had a lot of positive feedback. Like I said we’re going to find out what kind of feedback we get once we go out and take it to the people here in the state of Kentucky” […] “I believe that there is no such thing as racial equality. You see that in our cities everyday,”

However, as the station discovered, Kentucky state law requires that all political signage include the words “Paid For By”; Ransdell’s signs contain no such language, nor, apparently, did he ask for permission from the property owners on whose land his signs were placed.

Sounds as if – with or without Jews –  Robert Ransdell is definitely gonna lose.