Jews Do Sports, Germans Weirded Out 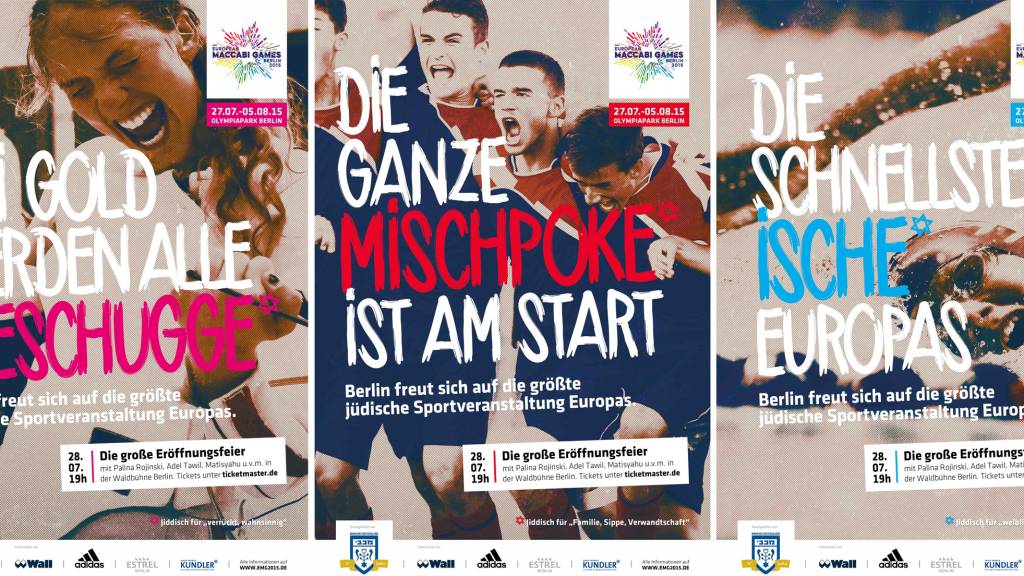 Listening to the Jewish community in Germany you’d think we’re all a bunch of manic-depressives. One day the Jewish renaissance is here and everything is hunky-dory (heeby-dory?), the next it’s all over, basically.

My own missives here have veered towards the latter, but even I felt my spirts sort of lifted when I heard that the European Maccabi Games, which are taking place in Germany this year, would open with a big ceremony on the very same stage that the Nazis built for the Olympic Games in 1936, from which Jews were for the most part disenfranchised. I don’t think it’s a big fuck you to Adolf Hitler but it’s a fuck you to somebody, that’s for sure.

These past few weeks posters appeared around Berlin promoting the EMG and even though they were tacky as hell – “getting gold makes us meschuggah!” – it was nice to not see them defiled, especially since only a year ago people were shoutings “Jews to the Gas!” at pro-Palestinian demonstrations.

But earlier this week it became known that local neo-nazi groups were apparently planning attacks on Jewish athletes. Of course, you might say, it’s what neo-nazis do. And yet, Silke Burmester, a columnist for the biggest leftist daily taz and previously a blogger for Spiegel Online, was struck by something: the very existence of a Jewish sports festival.

On Twitter she wondered what the hell a “Jewish sports festival” is supposed to be and whether Jews had their own Olympic games since 1936. (Answer: kinda, which sort of comes with being banned from other sports associations.) Not satisfied with that she later tweeted, after having watched a news report, what “Jewish sports” is supposed to be – swastika-throw? (Maybe we should be grateful that she didn’t go with coin-tossing.)

Other people voiced similar concerns i.e. were antisemitic and complained about the exclusionist and chauvinist and racist nature of such an endeavour. Some couched that in a general atheist critique of religion, others said that Jews just want to exclude the goyim.

In Germany, people are always very puzzled when they encounter Jewishness not as creed but as secular culture or, Gott bewahre, ethnicity because they think that kind of thinkings lead to the Nuremberg laws. And Jews expressing their Jewish identity beyond religion will often hear they should get over it and not harp on differences.

And in fact when called out Silke Burmester said she just wants to live in a world without ethnic and religious assignments.

So there you have it: some Germans are so over antisemitism they’re over the existence of Jews.