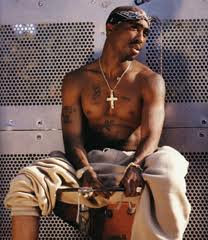 In the incredibly under-appreciated Bullet, Tupac Shakur has beef with the Jews, namely, Mickey Rourke’s Yiddishe ex-con, Butch “Bullet” Stein. Not too many people saw the movie (even Jewdar somehow didn’t know about it until last year) but we think we know a few who did. According to recently released FBI files, the Jewish Defense League used to make some shekels by issuing death threats to assorted rappers (including Shakur and Eazy-E), and then offering their “protection” for a fee. There’s so much wackiness involved in this story, we’re not sure where to begin, but one thing we do love is the notion of supposedly bad-ass gangsta rappers having their lunch money taken by a bunch of Jewish nerds.