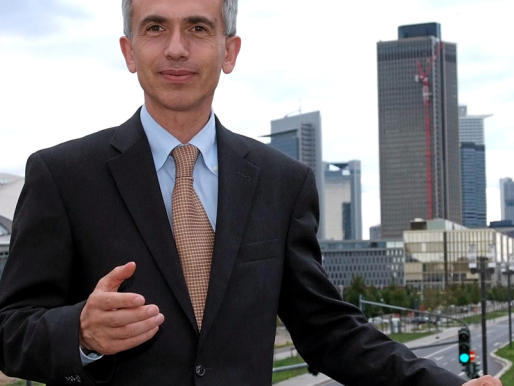 As reported in The Times of Israel, Peter Feldmann, a leading member of the German Social Democratic Party, won Frankfurt’s mayoral election with 57.4 percent of the vote. He campaigned on a platform prioritizing social issues like affordable housing. Notably Feldmann is the second Jew elected mayor of Frankfurt–the fifth largest city in Germany (and is its wealthy financial capital). Frankfurt’s last Jewish mayor, Ludwig Landmann, held the office for nine years until he was removed by Nazi terror in March 1933. The Times of Israel mistakenly claims Feldmann to be the first Jew to “reign” over a large German city since World War II, since Hamburg elected Herbert Weichmann, son of a Jewish doctor, to be its Lord Mayor between 1965 and 1971. (German social democrat Max Brauer, mayor of Hamburg between 1957 to 1960, was not a Jew, even though he attended the lectures of Altona Rabbi Joseph Carlebach and, in exile, spoke out against Nazi antisemitism throughout the 1930s).

Feldmann regards himself as “a liberal Jew,” and believes, like so many other Europeans, that faith is a private matter. However, Feldmann’s discretion has not stopped him from supporting his religious community from within the party-political sphere, just like Catholics and Protestants counterparts. In 2007 he became a founding member of the Jewish caucus of the German Social Democratic Party. (Where are the Jewish caucuses in the FDP and CDU/CSU?) Feldmann lives in the second largest resurrected Jewish community in Germany (about 8,000 registered members, while Berlin is the first with 11,000 registered members). Seventy years after Heinrich Himmler told Hitler that Germany was judenrein, there is a wave of growing Jewish communities across the country, including a burgeoning community in Nuremburg. Where Hitler marched his brownshirts and promulgated the Nuremburg laws, the Juedische Kultusgemeinde (statutory religious community) has more than 1,400 registered community members, and is bursting at the seams of its synagogue and community center, which were built in the mid-1980s.

Feldmann’s election isn’t news because it shouldn’t be a surprise. It is normal and good in any democratic society for all citizens, regardless of ethnic background, to be free to seek elective office. Feldmann is an ordinary citizen aiming to serve his fellow Germans, just as Jews like Ludwig Landmann, Hugo Preuss, Walther Rathenau, and Paul Hirsch wanted, in much more turbulent and scary times. Feldmann’s election is unremarkable as it ought to be unremarkable–a commonplace. How many people trumpet Mike Bloomberg’s mayoralty in New York as being a triumph for the Jews, as opposed to the billionaires? And we so often forget that Mark Green is an MOT–just like he, me, and (I blush to suggest…) thee.