Iraq Wants Jewish Treasure. Jewish People? Not So Much. 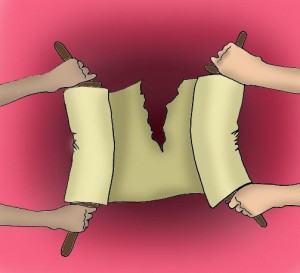 Iraqi delegates are leaning on the U.S. State Department to hand over some Jewish artifacts and documents — including marriage licenses and even Torah scrolls. Samir Sumaidaie, Iraq’s ambassador to the U.S., actually said, presumably with a straight face, “They represent part of our history and part of our identity. There was a Jewish community in Iraq for 2,500 years.” Yeah, sure, until they were all pushed out in the 40s and 50s and were forced to hand over their assets. (No word on whether or not Jews of Iraqi descent also being welcomed back.)

But it is really national pride and nostalgia for the days of Jewish Iraqis motivating Sumaidaie? Or could it be fear that Israeli/formerly Iraqi Jews might use the documents to reclaim land once the political situation there settles? And remember: Muslim clerics have issued fatwas demanding the death of any Jew who tries to buy property in Iraq, making Basra a less-than-ideal place for a vacation home. But perhaps that’s cynical. The thriving Jewish community of Baghdad would probably enjoy having this stuff, as the government would certainly hand it all over to the seven or so Jews still living there. Torahs for everyone!