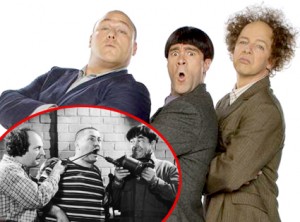 Jewdar has never been a fan of the Farrelly Brothers, finding that brand of humor (“Look, that guy’s retarded!”), to be a bit go–, well, let’s just say, not Jewish. When we heard they were making a Three Stooges movie, we weren’t thrilled, but figured it was maybe just a biopic. There’s a part of us that feels if only we’d known the terrible truth, we could have done something about it. Sadly, we were wrong, and it’s much too late to do anything about it now.

Far from being a biopic, the film is instead a horrid re-imagining of Three Stooges humor. The C-listers involved aren’t playing the actors who starred in the Three Stooges, they are actually playing three Stooges. Let’s leave aside the fact that none of the actors playing Dr. Howard, Fine and Howard are Members of the Tribe. Forget the fact that in the movie, the Stooges are raised by the Sisters of Mercy Catholic Orphanage (and no, we don’t care that the chief nun, Sister Mary Mengele, is played by Larry David.) We just find the whole concept enraging. There’s nothing new, or creative or interesting-–it’s just a poor rehashing of great original material. Now, some might argue that if we love the Three Stooges (and we do) we should like this movie. But we don’t even like Shemp, Joe, or Curly Joe–-as far as we’re concerned, if it’s not Curly, it’s not the Three Stooges.

To watch a film that’s derivative of a superbly funny classic, just isn’t the same. So what’s our kosher beef at the end of the day? They are calling this massacre a Three Stooges movie, when it’s really just the cinematic equivalent of somebody saying, “This comedian was so funny…” and then proceeding to repeat the bit. Like that, we presume that the Farrelly take on the Three Stooges will be the sort of thing that leaves everybody feeling awkward, uncomfortable, and decidedly unamused.