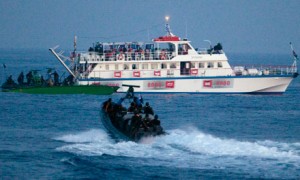 We’re sure one day someone will write a beyond fascinating dissertation on the subject, but for now, we’ll simply note that the Flotilla Fiasco is simply one more bit of proof that back in the day, the Jews who knew PR came here instead of to the Holy Land.

It’s not too late to save the situation, however. All Israel needs to do is announce, in big,big, big letters, that it is lifting the blockade. Then, after “Israel Lifts Blockade!” in big print, will come the fine print that mentions that all humanitarian aid will pass through Ashdod to Gaza.

Sadly, this seems unlikely–most of the Jews who appreciate a good Borscht Belt routine also ended up here.