[Editors Note: Grass is still illegal in most places around the country (how’s it goin’ Washington and Colorado?). As such, we encourage you to remember that this recipe is delicious without adding any illicit substances. Whatever else you wanna do, that’s on you]

Latkes are possibly the best thing about Hanukkah. Sure, presents are nice, but unless they’re really good, like a human heart in a jar or tickets to the Qudditch World Cup, you forget about them pretty quickly. Latkes however…mmmm. As soon as Halloween is over you start fantasizing about them. They’re fried and crispy and oily and unhealthy. Plus, you can eat them with either salty or sweet condiments, which makes them the perfect stoner treat.

In celebration of Chronicah (it’s totally a thing), here is a recipe that most certainly won’t be found in your bubbie’s cookbook (unless she’s FUCKING AWESOME). Presenting…potkes. Yep, they’re exactly what they sound like. You’re welcome.

As with Hanukkah itself, the most important part of this recipe is the oil. It won’t burn for eight days and eight nights, but it will make you feel like your whole body is a beanbag chair. Here’s what you’ll need:

To make the oil:

Yay. now you have yummy cannabis oil. It’s time to make your potkes! This recipe makes 4-6 servings, the perfect amount to get you and your friends stoned out of your gourds and save some oil for later. You’ll need: 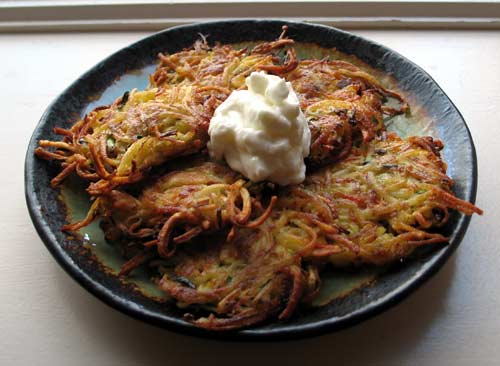 Have an extra crunchy Hanukkah