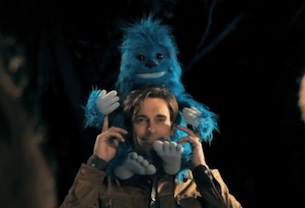 John Hamm, Herman Dune, and an adorable hitchhiking blue puppet. If ever there were a formula for awesome music videos, it would be this. The new clip for the Parisian band’s latest single “Tell Me Something I Don’t Know” features the Mad Men actor picking up the baby wookie and bringing him along to an outdoor concert. This kind of thing happens to me all the time. I’m glad someone finally incorporated the concept into a music video.

If you’re not familiar with the Dune, then you’re not as cool as Jon Hamm nor Heeb Magazine which featured the band a few years back as Chosen Music. The new album Strange Moosic is both lovely and misspelled. Go there.