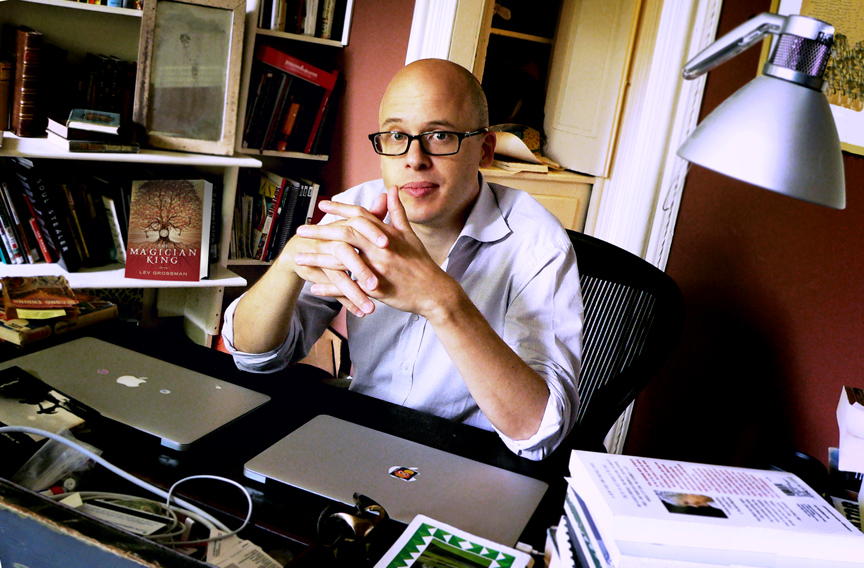 In most fantasy novels, magic is really easy and effortless. Hermione waves a wand and says some Latin word and that’s it, that’s all there is. In your novels magic is very complex and mathematical and almost tediously difficult at times, what was the reasoning behind that?

I’ve never been satisfied with how people write about magic. One thing is that it’s not difficult enough, you could never figure out why people don’t just DO it, except in Harry Potter where it just doesn’t work for some people…but that’s not a very satisfying explanation. It’s a very British explanation, that idea of the aristocracy, that everything is decided at birth and there’s no way to change your status.

I thought, suppose everybody could do magic but they didn’t because it was just very difficult. Suddenly that seemed much more American: everybody could do it if they just worked hard enough, and it turns out to do it you have to work very hard and be very clever.

I also thought that magic wasn’t very well described. Even in great fantasy novels, like Tolkien or Harry Potter, I always felt that, in Harry Potter, the focus wasn’t very good. You never learned very much what magic looks like, what does it sound like when someone cast a spell, what sort of smell is left in the air after a lot of spellcasting has been done. People don’t describe magic the way they would describe a table or a meal or a person. They describe it in this vague, wonder-filled way and I thought what if you described magic the way you would describe anything else, what if you described it the way James Joyce would describe a beach? Just get very specific, very clear, get rid of the soft focus.

The writers who have a clear influence in your work, Rowling and Lewis, are huge world builders who meticulously construct the world of their stories. How much of your world did you have already when you started writing and how much just came along the way?

I didn’t plan it all out as if I was planning a D&D module and running my characters through it. It wasn’t all set up, you make it up as you go along. The world gets generated by the story. You make it so that whatever dramatic thing needs to happen for the person, to serve their journey, you make sure that there’s enough world for it to happen. But I didn’t make this sort of freestanding world because, well, I’m lazy.

A pilot was filmed for a possible Magicians TV show that didn’t end up getting picked up. How was the book going to translate to TV?

It is initially startlingly different. It is in fact much less linear than the book, it kind of roams backwards and forwards in time through the story. The Watcherwoman is probably a more central figure to the show than she was in the books. They kind of had to take it apart and the parts are assembled in a startling way, which I would just kill to see.

The people who worked on it worked on the Sarah Connor Chronicles, then they had an amazing success with Thor and with X-Men: First Class. They’re not movie people dipping their toes in TV. I love that they met in a Dungeons & Dragons chatroom. They’ve got what it takes. Part of me hopes that the show is never made so I can go steal some of the dialogue that they used.

Why are all of your characters so emotionally messed up? There’s a speech that one of your characters gives where he posits that you have to have some deep inner pain to be able to inflict your will on the world, do you believe that?

I wasn’t thinking about magic when I wrote that, I was thinking about art. I think that’s always the case with fantasy writers. People tend to talk about magic the same way they talk about writing, and at the time I thought very much that good writing was done by damaged people, and that’s where it comes from.

Now I’m not as sure. Three years ago I would have said yeah, definitely, but now I’m not as sure as I was. I find that a lot of times people’s neuroses and psychic damage gets in the way of their writing as much as it helps them. The same must be true of magic.

It’s one of the central puzzles of fantasy as a genre, it is very self-conscious. There is so little fantasy that’s written that is aware that it is fantasy. In Harry Potter, there is no fiction within the fantasy universe, there are no novels in the Hogwarts library. I don’t think there are any novels in the Potterverse, there is only one narrative level and you’re trapped in it, No one in that world has ever thought of writing a novel. I always thought that that was a problem.

One of the great strengths of fantasy is that its very sincere, there’s not a lot of “wink wink” about fantasy. I loved Watchmen, which was kind of designed to eat other superhero stories and was very self –conscious: what if someone put on a costume and decided to go fight crime, what kind of person would they have to be to do that and what would that do to them?

That’s sort of what I wanted to do, push the needle a little bit further towards realism, and say what if some real people went to magic school. Well, the first thing they would is say, “Wow this is nothing like Harry Potter!” Its sad to say but it’s just true, that’s what would happen.

Although there is no C.S. Lewis in Quentin’s universe, that would be too odd. They couldn’t be going to Fillory and saying, “This is nothing like Narnia”. The early drafts were much cuter, people talked much more about Harry Potter, but it became too self-referential. There were still people who were dead-set for taking out all references to harry potter but I just couldn’t do it.

None of your characters are very religious but religion definitely plays a part in the story, especially in The Magician King where these divine beings appear, who don’t even acknowledge human existence, or when they do it’s a in a very cruel way. Did your own experiences with religion influence how you approached the subject in your writing?

It’s an aspect of the books I wasn’t in good control of. My own religious upbringing was very anarchical. My mom is English, she was raised Anglican, got very into Catholicism, became Buddhist. My dad was raised with a very conservative, hardcore conservative upbringing and he had aspirations of being a rabbi at some point, but he had a crisis of faith that led to him being very confused about his own religion. Growing up we’d go to Hebrew school, but then we didn’t have bar mitzvahs. One year we’d go to synagogue and then they next year it was “Synangogue? What is that, what are you talking about?”

It was very confused and it caused me for a long time to simply opt out of any religion of any kind. But I was in the back of my mind that I had problems with religion.

I was very angry at Aslan. I always thought Aslan spent most of the Narnia books dicking around. He would let terrible things happen to his characters, which as far as I could tell, he had the power to prevent. And I felt very angry with that and you see that in my books, it seeps its way in. Its surprising how much god comes into the books considering I have no religion of any kind.

I’m very conscious that I’m writing in a genre that is traditionally Christian and repurposing it for my own profane ends. There are gods in the book because I thought that there must be very powerful magical creatures and if there are, those must be gods. I know very little about Christianity, I don’t actually know what they believe.

What do you think of fan fiction? In your Time magazine article about it you wrote about how some authors are really against it. What’s your opinion?

I love it. I respect other points of view, but its wonderful to think that people would be invested enough in the characters that they would want to inhabit them in that way. I haven’t read any Magicians fan fiction, but I know that it’s out there. I don’t read it myself only because I’m in this phase right now where I’m very alert to things that I can use and I think I wouldn’t be able to resist borrowing from these stories. And you never know if fan fiction is feeding into published fan fiction.

I do write stuff based in the Harry Potter universe for my daughter. Its quite fun, its like a power thing. Like fuck it, yeah, Buckbeak is really important. He’s got a full, rich life.

What’s your fan base like? Have you had any weird encounters?

Overwhelmingly good experiences. Being at a reading is a weird experience, which I know because I go to readings. You’re meeting people who you have this huge emotional investment in who you’ll never meet again, unless you haunt their readings, which does happen. It’s very disinhibitng and you say things which you normally wouldn’t say. Stuff comes out but it’s almost always pleasant.

People make incredibly wonderful things, they make maps and jewelry and they get tattoos. I’ve seen some wonderful clock trees.

The people who like my books tend to be very smart and literate, they pick up a lot of the references. I’ve become quite good friends with some of the fans I’ve met, it’s pretty wonderful. I haven’t had too many experiences that are unsettling. I have had some people show up who identify very heavily with one of the characters and they’ll say, “Well I need to play this person in the TV show”, they’re invested in it enough that they lost some perspective. “Don’t worry about it man, I’m your Janet, you’ve found me, you can set your worries to rest.”

If you were the king of a magical fantasy land, how would you run shit?

The actual governing I think I would opt out of, have a human benevolent monarchy. I’m not High King material. At this point in my life I’m mostly interested in eating and drinking well. I’d be a cultural leader. I’d be the Jackie O.