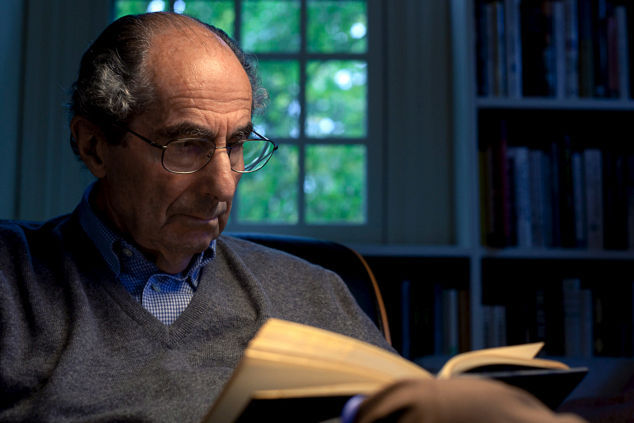 “Did you hear Philip Roth is retiring?”

I was offered condolences through Facebook chat from none other than my friend Shloime in an Orthodox Jewish Brooklyn neighborhood I will refer to as Borough Heights.* The same Shloime who, by day and by reputation, prints religious books but last spring boasted confidentially that he had privately published a book by a “big gun rabbi” in his ultra-observant community. This steamy novel was supposed to be an autobiographical account of an illicit affair the rabbi had, in his late teens, with a Chinese exchange student. Shloime told me that it was one of his best-selling fiction titles; with the earnings from the 10,000 copies sold, the rabbi was able to marry off two of his eight kids, and he is working on a sequel.

“And the best part about it,” Shloime said, “Is no one ever found out about it. He never got caught. There is no advertising. It is completely underground. It sold 10,000 copies just from word of mouth. It still sells. It’s a hot book. Guys have to hide it from their wives. I’m telling you, he’s the Orthodox Philip Roth. Well, without the humor.”

Well, I was soon to find out that Shloime might not be a successful spinner of fiction, but he was a chronic exaggerator. I was thrilled to receive the book from Shloime by express mail, until I saw that it was titled, Take My Heart, Leave My Soul. Not surprisingly, it was a big snore. It involved the young rabbi, who was teaching a literature class at City College in addition to putting a full day in at the yeshiva.* He was not a teen but in his 20s, the Chinese woman was his student, and the entire relationship consisted of his pontificating to her about the beauty of his way of life, how it was like a flawless poem and, therefore, the two could never marry. I couldn’t even finish 25 pages. I skimmed the rest because I knew Shloime was going to call up with a pop quiz on the book.

“But it gets better. There’s sex in it. Honest,” Shloime said on the phone.

“Shloime, I haven’t finished it, but somehow I don’t think these two end up sleeping together.”

“Well, no, but at the end, there is this great moment when he squeezes her breast and backs away, ‘as if he just touched the top of his mother’s blech*,’ or I think that’s the way he phrased it.”

“Well, he isn’t exactly the Orthodox Philip Roth. If there could be such a writer.”

“Well, I could try writing something.”

Why did I say that? Financial desperation? Masochism? A sudden desire to become satire in action? That was a mistake. Well, not quite. Shloime flew to Jerusalem with boxes of Philip Roth novels. I had gotten rid of my volumes of Philip Roth, Henry Miller and even Edith Wharton in a fever of religious frenzy that had seized me ten years earlier and had lasted until my recent divorce. I was happy to have Shloime bring me some of what I had foolishly sold for a song. (I was never getting back my CD’s like Miles Davis’ Birth of the Cool or John Coltrane’s Blue Train.) 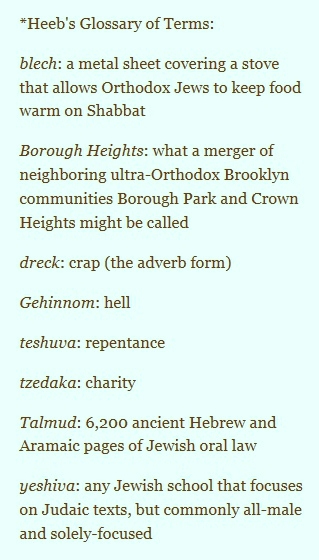 Shloime and I sat for hours outlining ideas for this scandalous yet redemptive smash hit he wanted me to write. He told me he never travels anywhere, because he doesn’t like to leave behind his cat Muffin, but was so excited he had to get on a plane with a whole box of books to give me an idea of what he was looking for.

“Did you ever finish reading Take My Heart, Leave My Soul, by the way?”

“Read the whole thing. That will be your model.”

The idea of such an assignment caused a cool inertia to crawl through my body.

“Make it an Orthodox guy, it doesn’t have to be a rabbi, but she should be a Chinese woman.  A lot of secular Jewish guys are dating Chinese women these days. It would appeal to a wider audience than the Orthodox. Anyway, they should definitely have sex. Go into detail. Don’t spare anything. But he should make teshuvah* at the end and marry a Jewish girl.”

“So readers get to indulge in fantasy but at the same time feel better about it because the guy makes teshuvah. And it could influence secular Jews to make teshuvah.”

I realized I could not work on this lame idea. However, I heard myself say, “Is there an advance?”

“I’ll give you a thousand dollars for the first 2 chapters.” For a single mother in Israel, that’s a lot. “Then we’ll see.”

“Can I ask you an honest question?”

“Do you read authors like Philip Roth, Saul Bellow? The authors in the box you brought me?”

Well …, I wanted to say, How can you commission such dreck* if you read quality fiction? But to my benefactor, I chose instead to say, “Do you think this kind of idea will sell? It seems kind of obvious and simplistic.”

“That’s what works in the underground, word-of-mouth, not-so-kosher, religious-themed book market in Brooklyn.”

An underground market if there ever was one.

“Did Take My Heart, Leave My Soul,” I resisted an amused choke at pronouncing the title, “Really sell 10,000 copies?”

“I thought you said on the phone that it sold 10,000 copies and that rabbi married his kids off with the earnings.”

“Look, G-d provides. That’s the way it is. You don’t make money from a book. You write a book, and G-d gives you the money.”

Without going into the ordeal of my attempt to write this agonizingly sentimental scenario:  when I finally gave up, Shloime let me keep the advance as a kill fee.

“I knew it probably wouldn’t work anyway,” he acknowledged.  I heard Muffin purring in the background during this phone call, as if to reassure me there were no hard feelings. “Really, you should have the money as tzedakah,* to help you buy groceries and feed your kids. Divorce is tough. I went through financial Gehinnom* after mine.”

He paused. “Too bad we didn’t manage to write the Orthodox Philip Roth novel.”

I wasn’t going to break it to him, especially after canceling the project, that Roth would never have written such a scenario, except through the crazed fingers of a character like Jimmy Ben-Joseph in The Counterlife or Alvin Pepler in Zuckerman Unbound.

“You know, I read Professor of Desire recently,” Shloime said. “I was thinking how it says in the Talmud, ‘A man has a small organ.  The more you feed it, the more it wants.’  So that novel showed that if a guy wants one woman, that won’t satisfy him, he’ll want another. And another. And another. I read it so I don’t have to screw up my life by living it. I can live vicariously and not get all sweaty with insane women in pointless relationships.”

The other day, upon hearing Philip Roth’s news of his retirement, Shloime and I had to console each other.