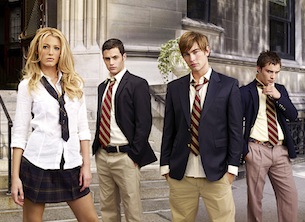 One of the highlights of my week used to be when prolific blogger and Videogum Editor Gabe Delahaye wrote his weekly Gossip Girl recaps. It was scathingly accurate, unrepentantly critical, and viciously funny. Sadly Delahaye no longer wastes his time on the WB dramedy, but I’ve only just figured out why. Because this would be like making fun of a handicapped person.

To say that Gossip Girl is the most awful thing on television right now would be like saying Blake Lively is a bad actor. Both these things are understatements. And while there are many things on TV that are bad (see CBS), what makes Gossip Girl infinitely worse is that its creator Josh Schwartz is under the impression that it is good. It is not. It is very not.

But first I must confess that there was a time when I had an affinity for the show. Teenagers acting wildly around New York City was something I could vicariously connect with, one, because my wild teenage years were long gone (if they ever were) and, two, GG was cheesy, airy, and super non-intellectual fun. It was like if this series had been a snack it would be Pirate’s Booty and that stuff is so yum. But now–LORD–the show is a total drag. It’s painful to every one of my senses (yes, it stinks). The formatting is boring, lazy, self-indulgent, and repetitive. What’s more is that these characters–every single one of them–are completely and utterly unlikeable. How hard would it be to make someone kind of decent, like you would maybe hang out with them if everyone on Earth moved to Mars and you were alone? I mean, mayyyybe Nate Archibald. He seems kind of decent for a male prostitute.

Selena Van Der Woodsen, the show’s ostensible lead, is a pillar of vacuity, the anti-role model. Ready to throw herself and commit to just about anyone with a pulse, she is pathetic, flighty, and selfish. Her counterpart Blair Waldorff is obnoxious, spoiled, and cartoonish. If this person existed in real life in New York City, she would be slapped and punched on a regular basis. In fact, right now, in my mind I am slapping her.  The relationship that she and Serena share is based on a toxic non-substance. There’s never a topic discussed between the two that does not revolve around revenge, boys, or revenge on boys. If ever there were terrible people to put on display for the tweens of America, these are them. How they insist on staying friends is beyond me. Maybe because they are the only two females on Earth that can deal with one anothers’ insanity. I could write a thesis paper on these two and it would be titled Sad.

But aside from the fact that the women on this show are weak, impulsive (how many times has Serena’s mother been married?), and reactionary, Gossip Girl‘s very structure is repetitive and this is where I fault Schwartz most. Not for his sheer and utter sexism in which women are all spineless and very much needy. I would assume that after the success he’s had on television (granted, Chuck is probably a bit of a struggle with NBC) he would attempt to make things a touch interesting. Instead he squanders every opportunity by making the differences between each episode negligible. What? There’s an event at the end of the episode that will bring everyone together? Shocker. Can’t we just get past the episodic finales in which someone is embarrassed in front of the whole Upper East Side? And somehow, everyone, including under-aged college kids drinking alcohol with parental consent are invited? Last night’s episode, for an offensive example, features Serena introducing her mother to her boyfriend who was once her college professor who she has known for two weeks who she first met running into him every morning while he hailed a cab for a different girl. Classy. This same guy has fallen madly in love with her (already? Yes, already) and alludes to her fondly from a podium in front of a lot of rich people. Because this is what normal people do. [And speaking of last night’s episode, how the hell does a prison inmate text his sister?]

I could list 10,000 things wrong with this show…and I almost feel compelled to. Yet, foremost, we must discuss the elephant in the Park Avenue room: why are college students still concerned about a rumor mongering texting service which has inexplicably maintained relevance despite everyone having graduated from high school? And why is the sender of these rumor mongering text messages focusing her life’s work on six losers who romantically swap with one another like a game of Spin the Cristal Bottle? It’s a little pathetic if you think about it. What did you do with your life, someone will ask her. And she’ll say back, I sent out text messages about hateful people. Cool.
Okay, so people still care about what this Kristen Bell-voiced tabloid “reporter” has to say but, by this point, everyone already knows that this collective of awfulness is already awful. How can you make the lowest level of terrible even more terrible? You can’t. Move on, people with cell phones. Download an app or something.

You can make the argument that if Gossip Girl bothers me so much then maybe I shouldn’t’ watch it. And you’re right. I shouldn’t. Yet at this point I am fascinated with how awful a relatively “popular” show can be. I get that One Tree Hill can be bad but I bet it knows it’s bad. GG is a flaming ball of turd yet many inexcusably dismiss its faults as a guilty pleasure. This is a car crashing into the Titanic while the Hindenburg is also fliying into it. How can you turn away from that? And we talk about the resurgence of quality television, and granted most of those shows are on cable, but the dated and out-of-time nature of Gossip Girl is truly surreal. By the time the 10 o’Clock news starts, I feel like the previous episode aired during 1773. Yes, that’s how dated it feels.

But what can you do at this point aside from complain? The parents are terrible role models–I mean, there’s freedom and then there’s negligence and then there’s abuse–and I realize that all these character are presumably based on a type of person that exists. Sure. I’ll buy it. But enough is enough. Do something interesting that involves “writing” and “creativity.” And I don’t mean make Jenny Humphrey a drug dealer for two episodes, or a plot line that involves her brother Dan getting a story in the New Yorker (REALLY? This is the most absurd thing that ever happened in the series).

My wife watches 90210. And every so often, I’ll zone out from my computer, look toward the TV from my desk, and ask her some questions about the reboot. It’s annoying of me but she puts up with it. I wouldn’t qualify the show as quality programming either but there’s some intense stuff going on there that feels somewhat compelling and important. It’s realness factor is the natural to Gossip Girl’s silicone implants (Blake, I wasn’t implying anything with this metaphor). Right now, there’s a teacher/rape storyline, a bi-racial dating element, a boy struggling with homosexuality, and a girl who lost her once-valued virginity to the seedy character who had just spent the summer sleeping with that young lady’s mom. The acting’s also not that very good but you also don’t watch the show wishing they would all die from shotgun blasts to the face.

And every Monday night I swear that I won’t watch another episode of Gossip Girl. I try to convince myself that I should progress further on my novel and take back the hour of my life otherwise spent shoving my face in a pile of garbage. But at 9 PM EST, I find myself with a glass of Scotch sitting in my lounge chair wincing at how just terribly awful something can be and thinking does pain make us feel alive? I’ll let you know next Monday night.