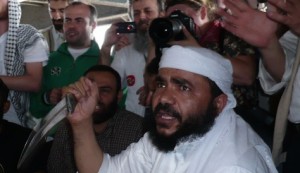 By this point, the blogosphere is all abuzz with word of Israel’s efforts to interdict a ship bringing supplies to Gaza, and the story, we presume, is going to play as “Genocidal Israelis Massacre Peace Activists.” Doubtlessly, there will be propaganda excesses on both sides of the story, but we would just like to remind our readers that, as this photo of one of those “activists” suggests, Israel is in a bad neighborhood, and we don’t remember ever seeing Gandhi wielding the kind of knife which, if it appeared in movie, would be castigated by academics as a fanciful and racist bit of Orientalism.