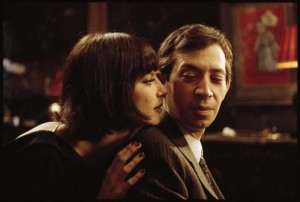 In Gainsbourg: A Heroic Life, Joann Sfar tells the story of French pop legend Serge Gainsbourg from his precocious childhood in Nazi-occupied Paris, when he was still Lucien Ginsburg, to his Paris –Left Bank days in the 50s, his Ye-Ye successes in the 60s (culminating with his brief, yet intense love affair with Brigitte Bardot), his baroque phase in the 70s when he played Pygmalion to Jane Birken and, finally, his latter years when he dabbled with reggae during the stripped down, more spontaneous era of punk.

Sfar is a bit of a star himself. He was once described to me as “the Robert Crumb of France” (if Robert Crumb himself didn’t, in fact, live in France), but now that I’ve seen Sfar’s first feature film and had the occasion of speaking with the 39-year old Frenchman, I’m more inclined to think of him as a Jewy Michel Gondry. Though Sfar has worked on over 150 comics and won a prestigious Eisner Award for his graphic novel, The Rabbi’s Cat, like Gondry, he resists simple classification. Both men are gifted storytellers, visual artists, and even musicians. Both are masters of mise en scène, their perspicuous renderings of the child-like elevating whimsy into an art form. And like Gondry, Sfar seems always feel present in his work.

That’s why you shouldn’t expect Sfar’s Gainsbourg to unfurl like a La Vie En Rose-style music biopic. It is unabashedly expressionistic, hyper-stylized, and is as much about its auteur as it is its subject. It is a period piece that only intends to confer the illusion of period. Think a French, swinging-sixties version of Spike Jonze’s Where the Wild Things Are—with Gainsbourg playing role of Max and a grotesque Jewish caricature puppet a la the running of the Jew in Borat, and another puppet—a dead ringer for Sesame Street’s “The Count,” as wild things. If you can get over an unabashedly personal take on Gainsbourg’s life, then you are in for a marvelous treat.

I have always wanted to speak with you.
I love Heeb. I know it well. You had this wonderful issue with a baby pig on the cover. I made a comic about it actually in Missionaire. You should see. In it, I was complaining that the French Jews are not that funny that they could do such a thing. I hope you don’t mind.

Not at all. I actually heard about it from Sam Ball who was making a documentary about you.
Yes, it is still in the works. It is a beautiful movie, but I have to say, it made me more Jewish than I actually am.

It’s funny you should say that because the first question I planned to ask was about Gainsbourg’s Jewish identity.
He did not care about religion at all. He did not know about being a Jew until the French Police gave him a Yellow Star. He was typical of Russian Jews at the time—he wanted to be French. After the War, a French newspaper said he looked like a rat [a traditional anti-Semitic trope]. He put this into his identity. He wanted to be the monster they described. It was the kind of sentiment you frequently heard from that generation. My grandfather used to say that the only way to end anti-Semitism in France is to take a French woman to a hotel room.

It seems like your Gainsbourg is a tragic character?
Gainsbourg was always looking for love from his audience—not his children and family and that, I think, is tragic because he ignored them. But my perception is that he was a happy character. He was happy with who he was and didn’t really change too drastically over the course of his life.

You didn’t include that notorious clip of Gainsbourg propositioning Whitney Houston on French television….
I think it’s unfortunate that the kids only remember this about Gainsbourg—that this overwhelms the culture’s memory. It’s like that Lars Von Trier quote [“I understand Hitler” comment at Cannes] in how it makes you forget everything else about him (and I should say that I am not a big fan of Von Trier’s films). I think it’s unfair the way these insignificant moments occupy so much space in the cultural memory.

So, how should we remember Gainsbourg?
He was a mix between the Rat Pack and the Sex Pistols. And he was funny! That’s one thing that people forget. When I was growing up, he was the only funny person on French television. I remember watching him and thinking that maybe it was going to be fun to be a grown-up. He and [Brigitte] Bardot were strange kind of heroes to the French. They were anti-heroes. You couldn’t help liking and envying them.

Sort of reminds me of the public’s relationship with Amy Winehouse.
Yes, I agree. They were very similar. Both Gainsbourg and Winehouse were gifted with intelligence—maybe too much intelligence for their own good. When you’re this intelligent, you’re like an empty hole and nothing can fill you up. Of course, Serge lived 35 years longer. And it was a similar relationship that each had with their fathers—very old-fashioned. Serge very much wanted to please his father. He was very happy to show him that he was dating Bardot.

Judaism seems to play quite a large role in your work.
Yes, it is part of me. My father’s family was from Algeria and my mother’s family from the Ukraine so my childhood was both very religious and provocative. Plus, my grandfather lost his family in the War so it was hard for me to let go of Jewishness in my stories. I’m in a perpetual fight with myself in my stories—like the Coen Brothers’ Serious Man. Judaism is part of me even though I am not a believer.

How did the idea originate to represent Gainsbourg’s dark side with a puppet?
I love monsters and puppets and knew from the start that I wanted the film to have a puppet. I love Guillermo del Toro, Roger Corman and all the monsters from Universal Horror. Who knows, maybe there’s also a bit of Dybbuk there? Even before I knew how it would function in the story, I wanted a puppet. I cannot imagine making a movie without a puppet. So first I wrote the script, second I got the puppet, third I found a way to get the puppet in. In the trailer for the film you don’t see the puppet—they [the studio] didn’t want it in there. But I wanted a puppet that could dance, play the piano and sit in front of a naked woman. You can actually see Doug Jones [the actor inside the puppet] if you look carefully through the puppet’s nostrils. During the shoot, my son fed him pound cake through them [the nostrils of the puppet].

The puppet shows how much Gainsbourg saw himself as a monster, correct?
That was something I wanted to get across in my film: He [Gainsbourg] wanted to be frightening and disgusting, but for me, he wasn’t. He’s very loved in France, but then again, I come from a place where rudeness and sexual candor are kinda cool. You can see it with [Dominique] Strauss-Kahn. Yes, we [the French] cheat as much as Americans, but we don’t see it as tragic. The only thing that Gainsbourg did in his life that the French saw as shocking was his recording of “La Marseillaise” [the French National Anthem]—not only because it was in reggae style but because it was black reggae performers and a Jewish guy.

Gainsbourg: A Heroic Life opens in New York on August 31 and Los Angeles on September 2.