When it comes to the sexiest ancient religious text, most people think of the Kama Sutra.  That book, however, is all about theory—things you could do if you had the time, energy and a good chiropractor. But the Hebrew Bible—man, that’s all action, all the time, with people “knowing” one another and begetting left and right. It says in the Talmud that “the daughters of Israel are beautiful…” and we at Heeb wholeheartedly agree. We are also not surprised, since our Patriarchs and Matriarchs were sexy as hell—hot enough to tempt kings and queens, and seduce and reduce conquerors. With this in mind, we are proud to present the 10 sexiest scenes from the Bible. The NSFW images you’re about to see, created by illustrator Gideon Kendall, may not be quite the way things were taught in Hebrew school—but we think you’ll pay a lot more attention to this lesson, originally printed in our Fall, 2005 “Sex” Issue. 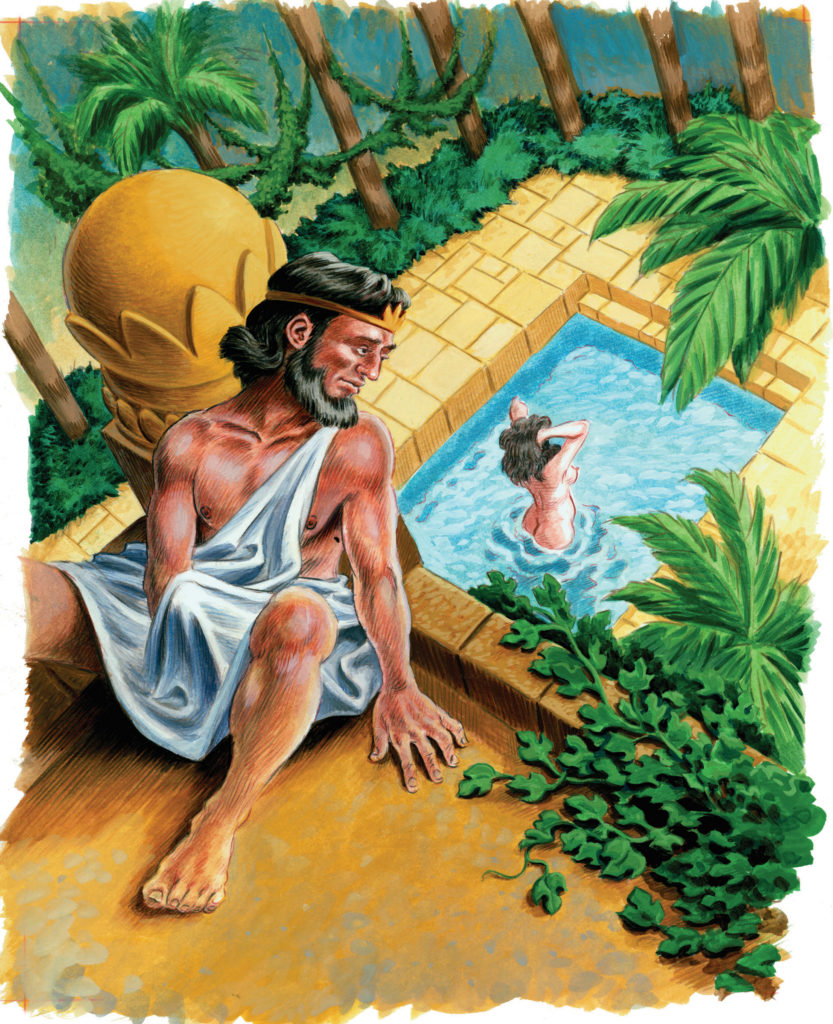 “Late one afternoon, David rose from his couch and strolled on the roof of the royal palace; and from the roof he saw a woman [Bathsheba] bathing. The woman was very beautiful…” (II SAMUEL 11:2) 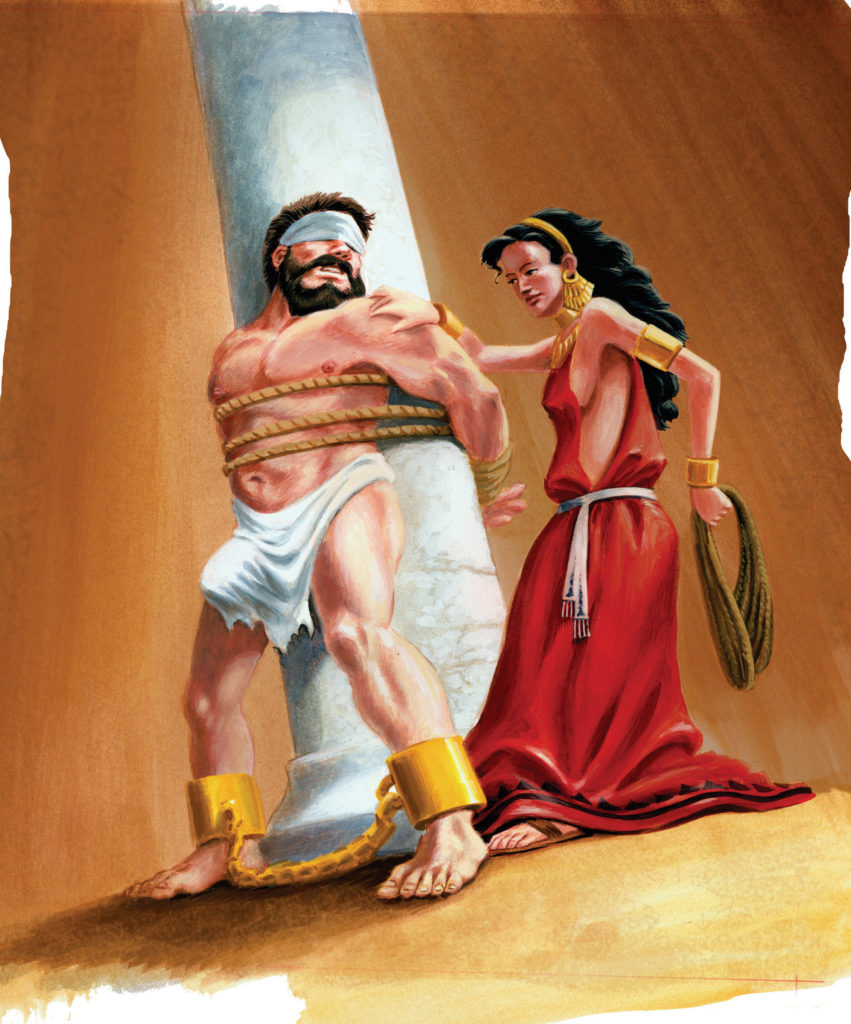 “Then Deliliah said to Samson, ‘Oh, you deceived me; you lied to me! Do tell me now how you could be tied up.’ He said, ‘If I were to be bound with new ropes that had never been used, I would become as weak as an ordinary man.’” (JUDGES 16: 10-11) 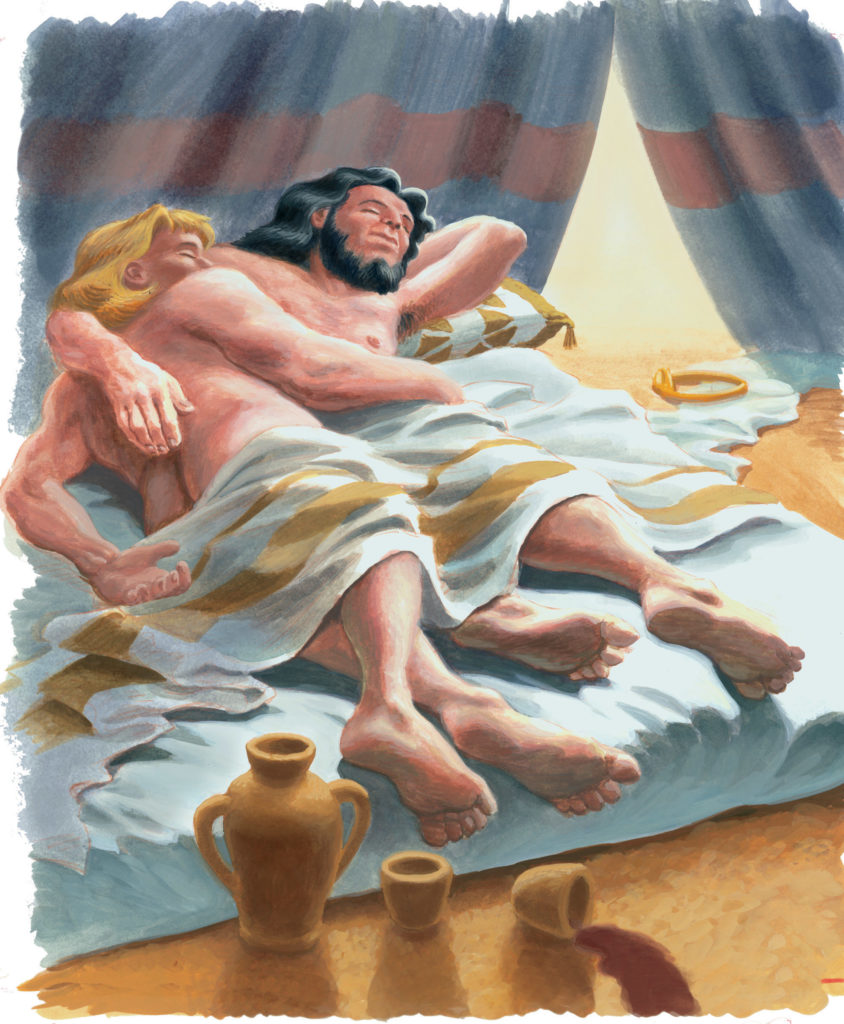 “…Jonathan’s soul became bound up with the soul of David; Jonathan loved David as himself…. Jonathan and David made a pact, because [Jonathan] loved him as himself. Jonathan took off the cloak and tunic he was wearing and gave them to David…” (I SAMUEL 18:1-4) 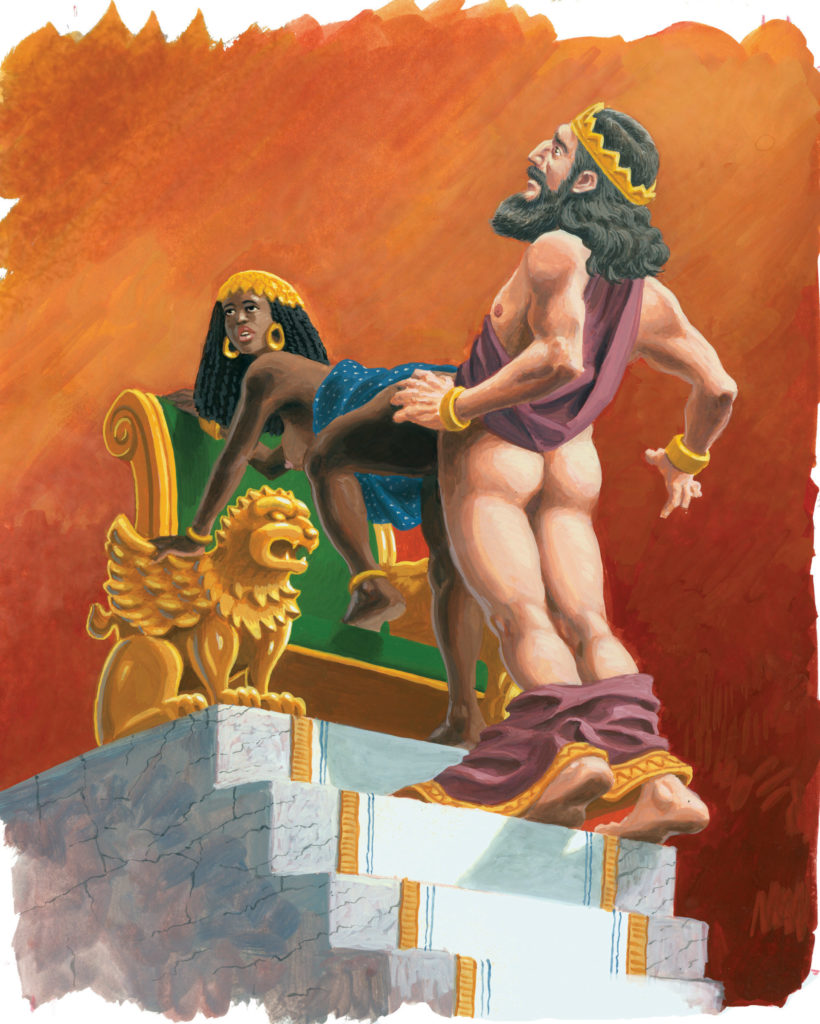 “King Solomon, in turn, gave the queen of Sheba everything she wanted and asked for, in addition to what King Solomon gave her out of his royal bounty.” (I KINGS 10:13) 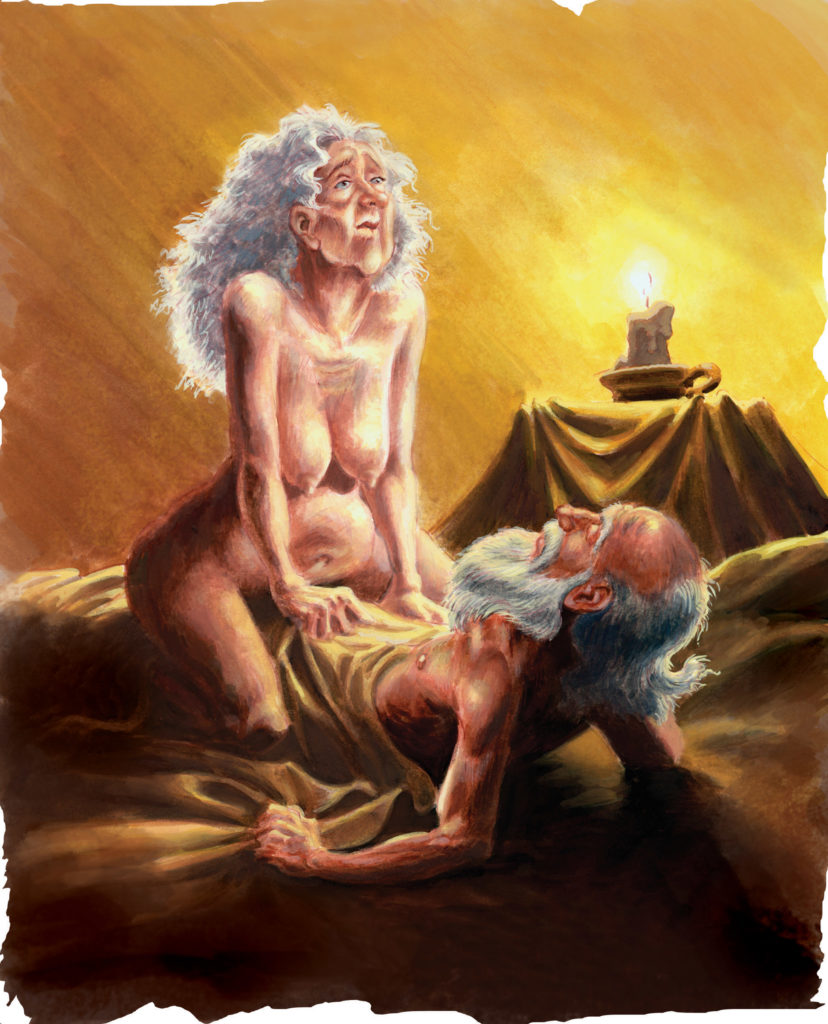 “Now Abraham and Sarah were old, advanced in years; Sarah had stopped having the periods of women. And Sarah laughed to herself, saying, ‘Now that I am withered, am I to have enjoyment—with my husband so old?” (GENESIS 18:11-12) 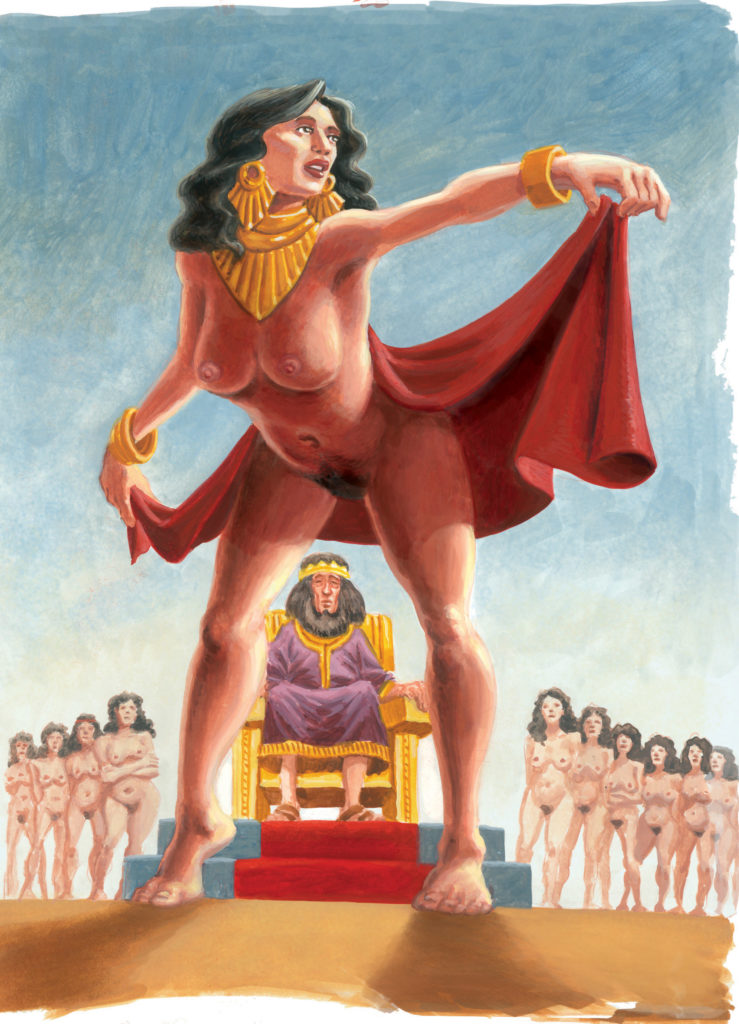 “Esther was taken to King Ahasuerus, in his royal palace…. The king preferred Esther over all the other women, and she won his grace and favor more than all the other virgins.”(ESTHER 2:16-17) 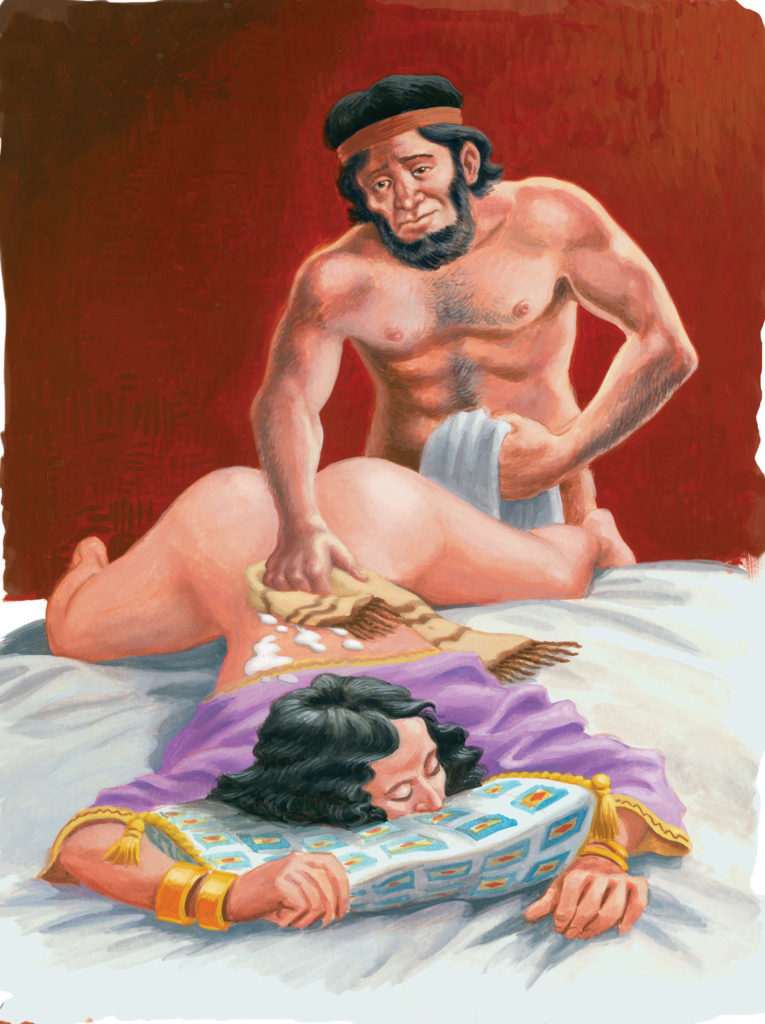 “But Onan, knowing that the seed would not count as his, let it go to waste whenever he joined with his brother’s wife [Tamar], so as not to provide offspring…” (GENESIS 38:9) 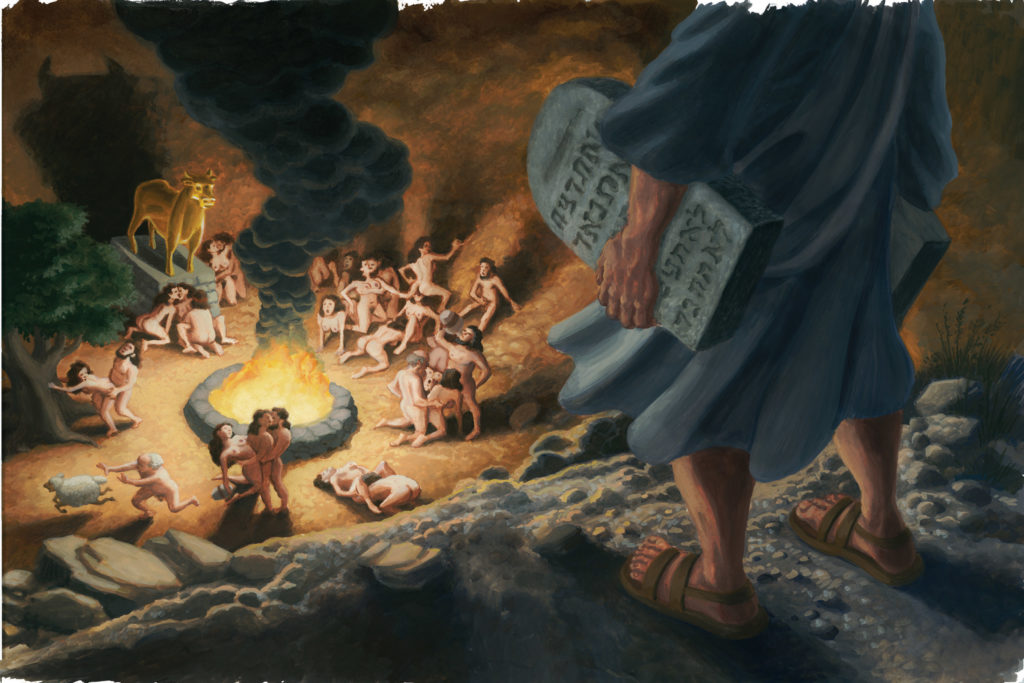 “The LORD spoke to Moses, ‘Hurry down, for your people, whom you brought out of the land of Egypt, have acted basely.’” (EXODUS 32: 7) 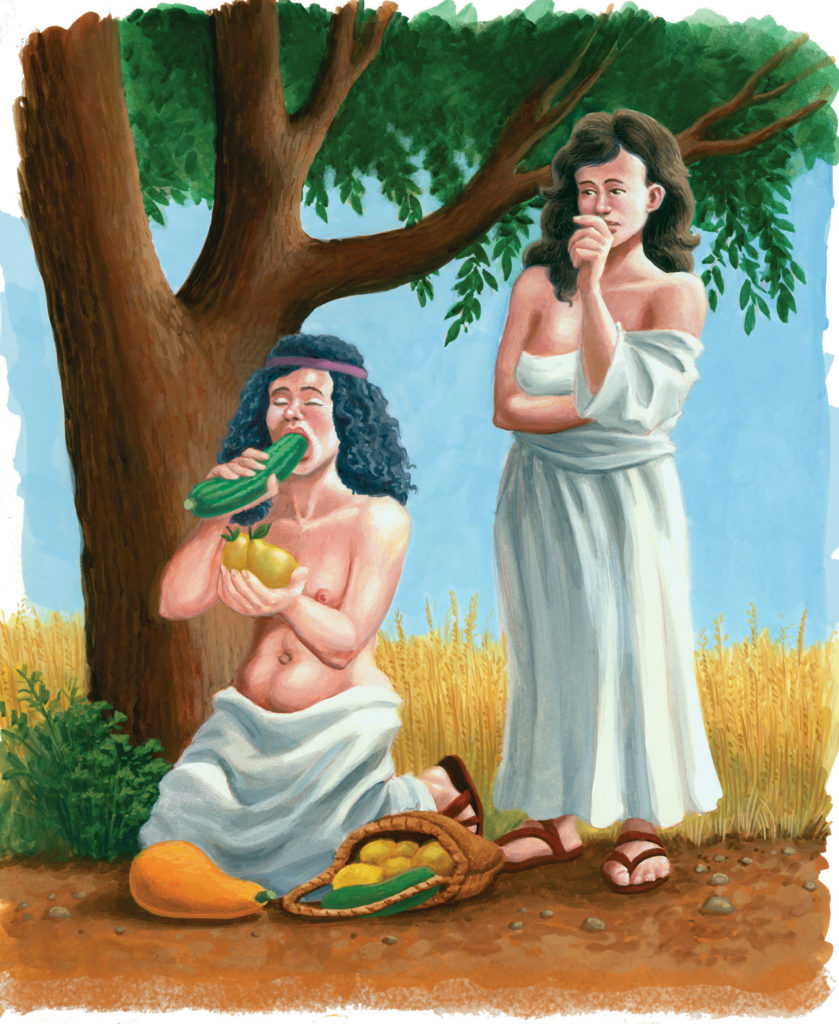 “Naomi, her mother-in-law, said to her, ‘Daughter, I must seek a home for you, where you may be happy. Now there is our kinsman Boaz…. He will be winnowing barley on the threshing floor tonight. So bathe, anoint yourself, dress up, and go down to the threshing floor…. When he lies down, note the place where he lies down, and go over and uncover his feet and lie down….” (RUTH 3: 1-4) 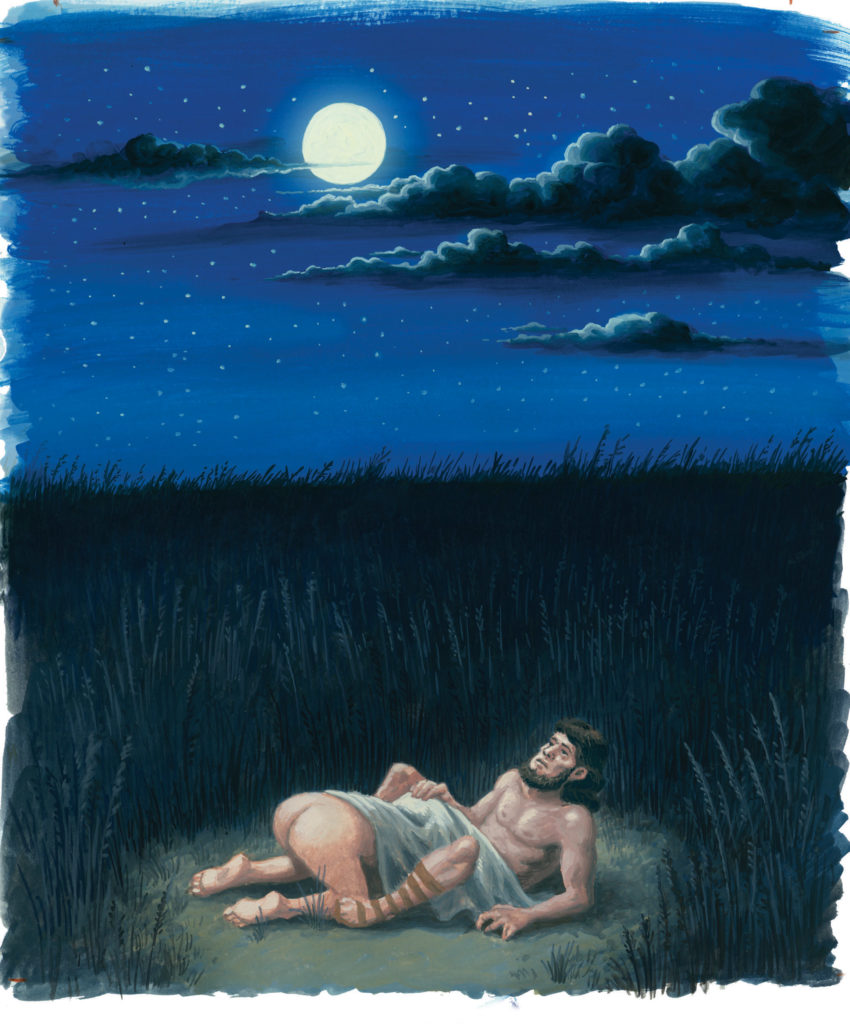 “Boaz ate and drank, and in a cheerful mood went to lie down beside the grainpile. Then she went over stealthily and uncovered his feet and lay down. In the middle of the night, the man gave a start and pulled back—there was a woman lying at his feet! ‘Who are you?’ he asked. And she replied, ‘I am your handmaid Ruth. Spread your robe over your handmaid, for you are a redeeming kinsman.’ He exclaimed, ‘Be blessed of the LORD, daughter!…” (RUTH 3: 7-10)