Fall Fashion for JAPs: The Return of the Urban Cowgirl 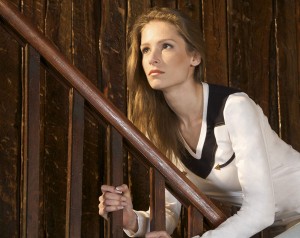 Just because fall is approaching and the weather demands that you stow away  breezy rompers and flip-flops for hefty, body-enveloping gear doesn’t mean there’s a lack of new trends for the discerning young Jewish woman. Lindsay Kotler, 26, a self-described JAP, hopes one such trend will be the return of the urban cowgirl look.  Along with her business partner, Drew Arnold, Kotler has recently launched Wolf & Harrison, a clothing line of reasonably priced luxury casual wear (think t-shirts and long sleeves for men and women) with an “urban, modern approach to western style clothing.”

And unlike the rhinestones and general cheesiness that accompanied the original urban cowgirl iteration (remember Madonna during her Music days?), Wolf & Harrison offers a subtler approach. Sold exclusively online, their first collection includes t-shirts with ranchero-style shoulder patches for men as well as t-shirts with wolf’s head patches on the back and long sleeve shirts with side-stitching for women.  Each product comes with a short story description reminiscent of silver fox, J. Peterman.

Kotler is confident that the Wolf & Harrison aesthetic will catch on among JAPs   because as she says “there is nothing [JAPs] like more than to dress rustic than be rustic” allowing them “to pretend they are cowgirls in the comfort of their BMWs.”

The t-shirts in the line are sleek and fitted, appealing to those who are “well put-together and take an interest in their clothes and how they look,” Kotler says.

Yet despite the assertion that JAPs place great importance on their clothes and looks, Kotler disagrees with the unflattering stereotypes of the spoiled and whiny Jewish American Princess. “I don’t think any of the stereotypes are true.  I’ve been raised around Jewish people, my family is Jewish, not every JAP is the same but there are certain qualities that culturally can be grouped…I know first hand that isn’t true.”

“We like nice clothes.  We enjoy having our hair done.  I don’t think it’s a bad thing at all, it’s a fun thing,” she says.

And, yes, Kotler thinks you can look rustic while maintaining good grooming practices.  As she says “it’s more fun to dress up and feel cowboy rustic than actually go out and be rugged.”

So even if you grew up in a ranch house on Long Island rather than a cattle ranch in Texas, Wolf & Harrison is helping get rid of that distinction.