The murder of Hamas’s Mahmoud al-Mabhouh has become the most watched Mossad operation since Spielberg’s Munich. Front page news in Israel, this story allows journalists everywhere to point their fingers at Israel. Check out these quotes from The New York Post:

"But they were well-trained members of an 11-member hit squad — possibly dispatched by Israel . . . "

"The officials hinted that Israel’s Mossad spy agency — which is noted for using fake passports to assassinate Arab terrorists — was behind the identity theft."

"Possibly," "hinted" and "noted for" is journalese for "we actually don’t have any fucking evidence."

Okay, yeah, seven of the eleven suspects used stolen identities of Israelis with dual nationalities. And six were British citizens living in Israel. And Commander al-Mabhouh was responsible for moving weapons from Iran to Hamas forces in Gaza . . .

Okay, fine, we all know Israel most likely offed him, but isn’t some investigation required before the whole world blames the maid (even though she probably did steal the silverware)?

Israel’s Foreign Minister Avigdor Lieberman isn’t making things easier with his coy posturing. Instead of admitting (which he can’t do) or out-and-out denying Israeli involvement, Lieberman clarified that Israel holds “a policy of ambiguity” on intelligence issues. Thanks. 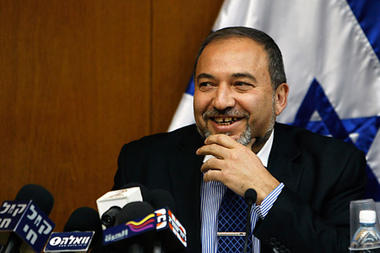 During an interview with Israel’s Army radio, Lieberman said, "There is no reason to think that it was the Israeli Mossad, and not some other intelligence service or country up to some mischief.” Contributing to the PR disaster, he sounded about as convincing as those Family Circus kids when they blame "Not Me."

Lieberman suspects this person, not the Mossad, may have been behind the murder.

And now Israeli ambassadors everywhere are getting called into the principal’s office. (Or, as Haaretz puts it, "summoned.")

As far as media clusterfucks go, we’re giving this one four out of four stars. Best to leave this mess of that new PR campaign that is riding in on a white horse just in time to save the day.