In Praise of Neil Diamond 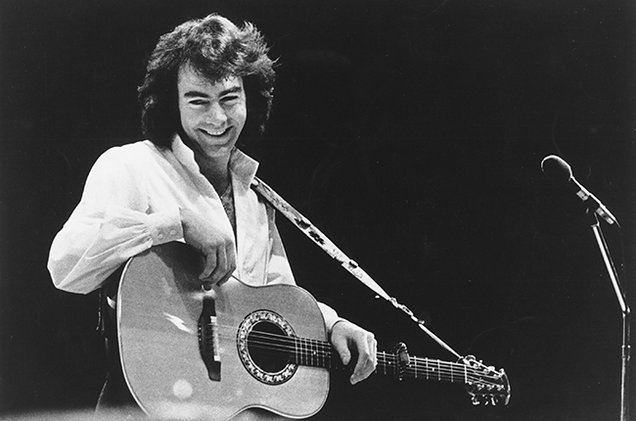 This article first appeared in Heeb’s Debut Issue (January, 2002) and was written by Mara Schwartz.

Mention Neil Diamond to just about anyone under forty, and the name conjures up images of sparkly shirts, orgasmic housewives, and arena tours. They might confuse him with Barry Manilow, or start singing their own thunderous renditions of “America” and “Love on the Rocks.” They might recall that their parents listened to him if they weren’t cool enough for the Stones or the Cars. They might chuckle, or worse yet, scoff. And why not? Most of Diamond’s best-known hits are pretty unhip—they were unhip the day they hit the airwaves, they got less hip as time passed, and they’re not even retro-ironically hip now. He inspires impersonators, for chrissakes. And it’s been this way for a good twenty years.

But let’s remember that Neil was not always such a cheeseball—in the late 60’s and early 70’s, his songs were better than most of the pop drivel out there. Look at some of the other smiley-faced chart-toppers of 1970, when Diamond had his first #1 with “Cracklin’ Rosie”: “I Think I Love You,” “Make It With You,” “Everything Is Beautiful,” and George Harrison’s plagiarizin’ paean, “My Sweet Lord.” Pickings were slim, to say the least.

Diamond honed his chops as a songwriter-for-hire before finding performing success, and his early recordings (most of it on Atlantic’s faux-indie Bang Records) were sincere and well-written, without the shmaltzy touches for which he later shot to stardom. They were produced simply and cleanly, sometimes leaning toward the slightly psychedelic. With handclaps and funky bassline breaks, tunes like “Cherry Cherry” and “You Got To Me” made some of the best three-chord rock this side of “I Can’t Explain.” And while many Diamond-penned songs have since been made famous by other artists, his own versions still tend to outshine them. UB40’s cover of Diamond’s “Red Red Wine” wasn’t the worst thing in the world, though its overplayed, best-of-the-80’s context doesn’t help it any. But Diamond’s own recording was exquisite, with a honky-tonk sorrow that UB40 can’t touch. Sparse and slow, with understandable words (and no wretched “monkey gets choked” toasting in the middle), Diamond’s version was darn close to George Jones shedding tears of sorrow at the bar. Only the beverage was different.

It wasn’t until the late 70’s that all things Diamond took a turn. He’d had a phenomenal career through the early part of the decade, and not just with his own hits, but also by writing smashes like “I’m a Believer” for others. The whole thing burned him out and led to a four-year break from touring, during which he opted to hang around and do things like scoring the film of Jonathan Living Seagull. After his recess, he first worked with the Band’s über-cool Robbie Robertson on Beautiful Noise—a good but misleading sign, because then came the big violins.

The whole series of singles from this era—“You Don’t Bring Me Flowers,” “Love On The Rocks,” “September Morn,” “Desiree,” “America,” and so many sugary, orchestra-laden others—are what most people cringe at when they think of Neil Diamond. But in all fairness, that whiff of shmaltz we’ve all detected over his last two decades is mostly in the production. It’s in the way he’s styled. It’s in the inflated string section, the exaggerated highs and lows, the songs “inspired by” ET, the duets with Babs. It’s in those damn shirts. It’s in the highest output of Christmas recordings by any Jew, ever. It’s not usually in his songwriting. Sometimes it is—even Steve Albini couldn’t save “Heartlight” or “America.” But once you get past the trappings to his original songs, you can still hear the goods in there. His later output hasn’t lost its intrinsic beauty—it’s just really, really overwhelmed.

Furthermore, this was the late 70’s, when the Ramones, Television and Patti Smith were roiling at CBGB’s. Brian Eno was busily inventing new genres. The Sex Pistols had just set the world afire and imploded. So Diamond’s big-studio craft wasn’t exactly blazing new trails, but really, was he obligated to? His fans weren’t the coolest or the punkest or the youngest, but they stuck by him as he sold out arena after arena, consistently sending his albums—even the live ones—into platinum range. Who says only hipsters deserve to enjoy music? Right now, not many except for Diamond make music for middle-aged women. And besides all that, he is ultimately someone who did it himself. He was a regular guy who learned the guitar, worked hard, wrote a lot of songs, and got record deal after record deal. He put out a flop single on Columbia, got dropped, dusted himself off and became a superstar—and Columbia came crawling back with a multimillion dollar contract. How’s that for sticking it to the Man?

Plus, it’s his real name.

If there was ever a song from those years ripe for reexamination, it’s “You Don’t Bring Me Flowers,” which Diamond recorded not just once, but twice (once solo, and later with Streisand). Sure, our memories get clouded by images of big 80’s Main Event-era perms and gold man-chains on hairy chests, but the tune itself is a heartbreaker, a sad tale of a slowly dissolving union, evoked by little everyday details. The longed-for flowers and love songs are closer to the spare foot-without-a-sock deceptions found in Squeeze’s best, than to most of the Top-40 radio shlock of ’78. And compare this to today’s musical climate: Beck throws together a string of neat-sounding non-sequiturs, and he’s hailed as the new Dylan. Please.

Fortunately, although Diamond hasn’t developed the retro-revisionist hipster cache of Tony Bennett or Tom Jones, his time is coming up for a bit of reevaluation. He’s been featured on every twentysomething’s favorite rock history class, Behind the Music—and thankfully, his episode concentrated on the Bang years rather than the arenas. Neil’s gonna get his props, and enlightened music fans will be free to admit that they prefer their songs sung blue.