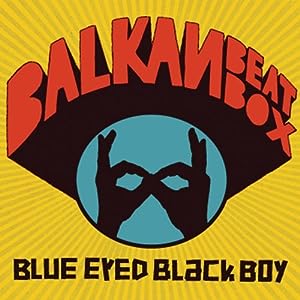 Three years since Nu Med, Balkan Beat Box — the official Mid-East champions of over-processed dance music — releases Blue Eyed Black Boy, another Jewish alternative to the overblown-yet-mini-van friendly sounds of Black Eyed Peas and (gulp) Baha Men. They’re kicking ass, taking names and hitting on as many American tourist chicks as possible, leaving no time to breathe because you gotta dance dance dance! Luckily, Israelis are allowed to just stand there on the dance floor for a minute when they need to recover, sort of like a very, very still version of voguing.

Strongest cuts are the instrumentals: “Kabulectro,” “Balcumbia,” “Smartron,” and “Lijepa Mare,” where the horn and percussion arrangements and hip-hop influences take precedence. Unfortunately, Tomer Yosef sometimes sounds like a cross between Matisyahu and Rafiki from “The Lion King,” and his politically infused, Rastafari-esque stylings add confusion to “Move It,” “War Again” and the title track.

At just under fifty minutes, Blue Eyed Black Boy is a dizzying and dehydrated desert adventure. You’re almost sure to hear bits used for Birthright promotional videos — and if you fail to qualify, the record is a decent audio-substitute for a free trip to Israel. BBB still, as the Huffington Post declared, “raises the ante of what modern Balkan music could sound like.” So if you would enjoy getting crazy in a packed, sweaty Tel Aviv nightclub and — amidst the sleaze — wistfully remembering the shores of the Dead Sea, Blue Eyed Black Boy is destined to become your chosen soundtrack.