[Editor’s Note: Scroll Down for an exclusive clip from Félix et Meira, courtesy of Oscilloscope]

At 23 Luzer Twersky left everything behind. Having grown up in an insular, tight-knit community of Satmar Chassids that meant saying goodbye to the following people: his parents, his friends, his wife and his children. So… everyone. On his own for the first time ever, and confronted with a world he was only just beginning to understand, Twersky set his sights on Hollywood. That’s crazy thing for just about anyone to do, but especially for a guy who grew up barely speaking English, despite having grown up in Brooklyn.

Five years later the payos are gone, replaced by loud, vibrant custom suits, and Twersky is now starring in his first feature film, Félix et Meira. Luzer plays Shulem, a Satmar Chassid husband struggling to understand his wife, Meira, whose longing for the secular world has driven her to falling love with non-Jew Felix.

I sat down Twersky at a coffee shop in LA.

I really enjoyed the film, the performances and writing were very affecting I thought. Your character, Shulem, is obviously very different from you as a person. As a husband and a father he wields authority very decisively, it’s kind of what I say it goes. I’m wondering, when you were a husband and a father, how did you wield authority?

Every family is different but I was never the bossy type. I knew I had that power, because she was really old-fashioned in that way, she was very patriarchal, I could have wielded that power. Though when I started veering off the path, doing my own thing, I was able to tell her, “mind your own business.” She was very accommodating; she was like “As long as you do what you do outside the house and you don’t bring your goy home… we’re good.” Eventually she was no longer good with it. But I know people like Shulem, you know, I’ve seen plenty of authoritarian husbands, who are just like running the show and in control in a very old-fashioned way. So I based it on that.

It’s interesting that you brought up the space of “inside the house” vs. “outside the house.” There’s a moment when Shulem catches Meira listening to a reggae record and he says to her “Why do you humiliate us?” What struck me about that word, “humiliation” is that that’s typically a public transgression, but obviously they’re home alone. 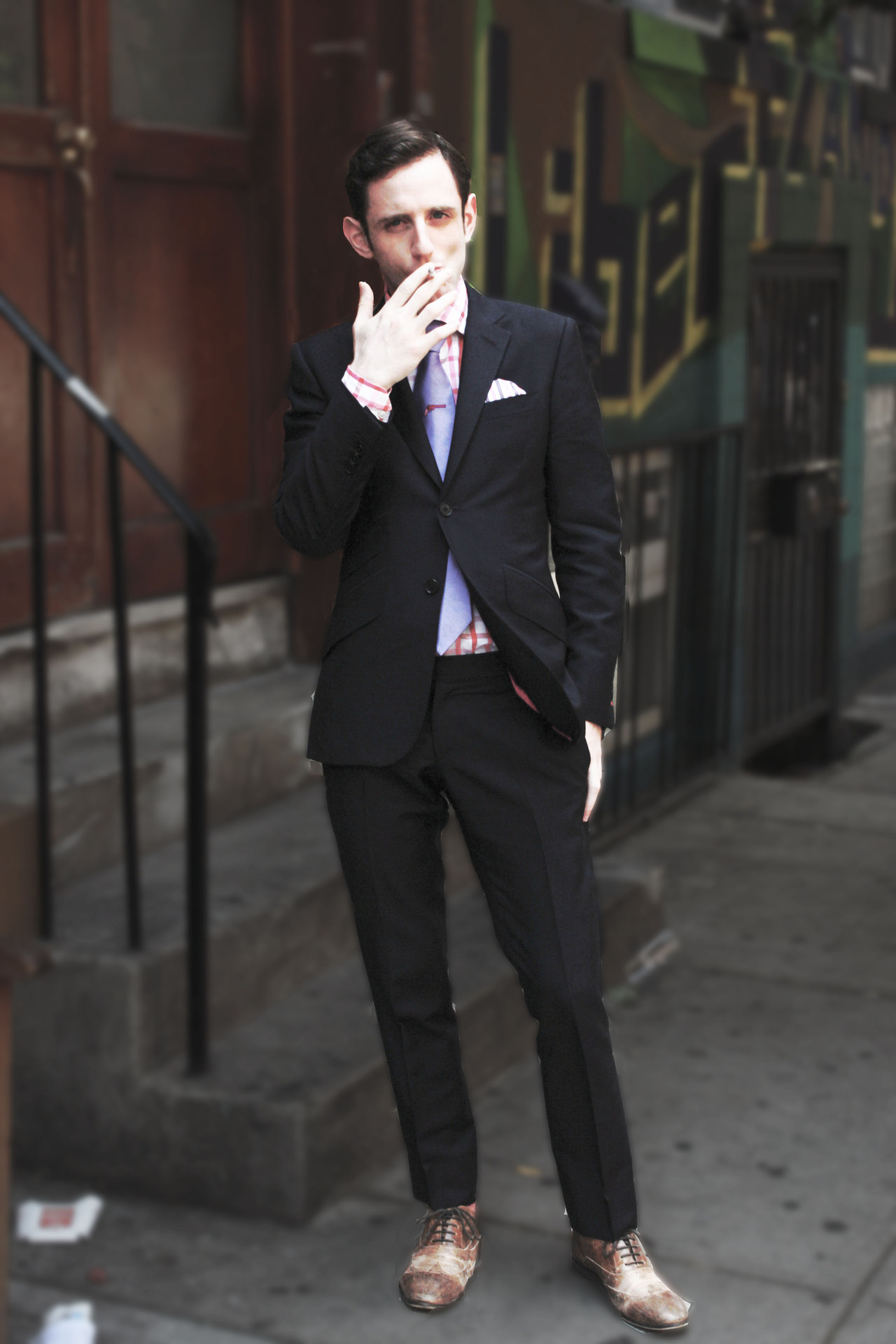 One thing that stands out to me about you, is your style. It’s very loud. Not in an obnoxious way. It’s declarative: “I’m here.” I’m thinking especially of that bright purple suit with the stripes that you wore for the “Felix and Meira” press tour, which was very bold.

So the whole suit thing started with Duncan Quinn, a very famous suit designer. Duncan wanted to do a campaign based on the Lew Wasserman quote “Think Yiddish, dress British.” He decided to adopt that quote and started looking for a Yiddish looking guy. This was back like four years ago or something when I still had the beard and the payos and everything.

One of my ways of getting into the business was like I’m going to keep the beard and payos and even though I’m completely not religious  and you know this is how I’m going to get the Hassidic parts and slowly break my way into Hollywood. Which is a crazy idea. But apparently it worked! Maybe this is the last movie I’ll ever do, but so far it worked.

And now you’re in Los Angeles.

It’s weird, this place. I was in Tel Aviv, two months ago. I ran into a guy, a writer and director, who was also from LA. So we start talking about “making it” and “blowing up,”  and I go “what do you mean by blowing up?” I have no interest in blowing up so what do you mean “blowing up?” He pulls out a still of his first short and he goes “see this actor here?” And he shows me a billboard of this new TV show on Sunset Boulevard, this massive billboard, this huge picture of him and he’s starring in this new network TV show. He’s like “THAT’s what blowing up looks like.”

Well I did say “I’m not interested in blowing up like that.” But what I was REALLY thinking was like “I’ve never heard of this guy. I’ve never heard of this TV show. It looks like the kind of TV show that’s gonna last about three episodes. So what don’t you just take your blowing up and shove it?” But you know, that’s like everybody I meet a lot of actors or writers, they want to make it, and I don’t know what it means. Does it mean making a living as an actor? I don’t think that’s what they mean.

Definitely, when I hear blowing up, I hear getting famous. Which is very different from earning a living as an actor.

I mean, I want to tell good stories. And I tend to tell Hasidic stories because you know … I am in a way cheating my way into the business. But as David Carr said, “…we all walk this earth feeling we are frauds.” So you know, I feel that way and I’m sure like many people feel that way. And I’m sure people have tried different schemes of breaking in and it didn’t work for them.

So on one hand you’ve left your Chassidic identity behind and yet you still felt an obligation to portray it accurately?

We all want to see ourselves on screen. That’s what it’s about. They say writers write what they know and I tend to tell Hasidic stories. I am in a way cheating my way into the business. I got lucky. I got really, really lucky, in many, many ways. First, by getting the first short film “Where Is Joel Baum?” (dir. Pearl Gluck) which they saw in Montreal and they cast me for in “Felix and Meira.”

I’m lucky, the role I play that came around, because literally, I get so many scripts about Hasidic Jews, that are just complete and utter shit written by five-year olds. So when I get something like “Felix and Meira,” and it comes out this well…  I got REALLY lucky and there’s no other way around it. This is not hard work— well, it is, because I spent seven years trying to do it and I was willing to be homeless for it and have no money for it— yeah, so I did make some sacrifices to get there, but it’s not really hard work, it’s luck. It’s a lot of luck.

Any worry that you’ll get typecast as solely the guy who plays Chassidic Jews?

It’s not like I haven’t done any other things. I play a junkie named Abe in Pearl Gluck’s new film, called “The Turnout.” And here’s the funny thing about it. It’s set in rural West Virginia and it was mostly local hires, and I was the only one who was brought in from out of town. So she was in the editing room, and the editor was telling her “you know I love that you hired locals and I especially love that guy Abe, the junkie. Where’d you find these locals?” She’s like “actually that’s the only guy who’s not a local.” There it is.

Yeah, but to me that’s a great compliment because it proves to me that I’ve been able to extend myself beyond the Hasidic Jew. So that was nice about it. I’d love to do other things and I’m capable of doing other things. It’s probably going to be hard to convince people I can do other things, which is why I’m going to do my own other things.

I’m wondering how you feel about mainstream Jewish culture what being a Jew means for you right now?

It’s still something I don’t know, “What does it mean to be a Jew?” I got asked at the Palm Springs film festival, someone in the audience got up and asked me how I feel about Israel now that I’m no longer satmar and no longer anti-Zionist… and I don’t know. It’s a very difficult question to answer. And when it comes to Israel, there’s literally maybe five people in the world who are experts about that issue who can entertain the question about Israel and Palestine. I am not one of those five people.

What’s your relationship like with more mainstream Jewish culture? I was raised reform and grew up watching Woody Allen movies. I went to Jewish summer camp so I look Seth Rogen and I know that guy.

L: There’s still a part of me that feels… you’re not really Jewish. That nebbish idea, it didn’t exist in my head until I left. And I didn’t know about that. And now I do get compared to Woody Allen, which is a ridiculous thing because I’m not nearly as talented as him and I don’t have a stepdaughter.

This interview has been edited for length and clarity.

Enjoy this exclusive clip from Félix et Meira, provided with permission (thanks Liz!) by Oscilloscope: