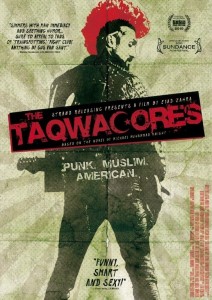 The Taqwacores is a kick, a film that brings a more expansive view of Islam to the screen than you’re likely picturing if you’ve been seriously fretting the appearance of a mosque in a former Burlington Coat Factory in downtown Manhattan recently.  Based on Michael Muhammad Knight’s novel it chronicles a collective of Muslim rebelling misfits who live together in an old school “punk house.”  There they challenge their personal and religious boundaries, and often each other.  The title comes from the amalgam of “Taqwa’ (an Arabic word suggesting piety or god fearing) and ‘Hardcore’ the fast paced stripped down style of punk rock.  For a community where ‘could lead to dancing’ may well be a serious concern this is truly subversive material.

Yusef, an engineering student in Buffalo, is searching for an apartment off campus.  His tour of the house starts near a Saudi flag with an anarchy symbol painted on it.  The rest of the house’s decor is equally subtle, looking very much like CBGB’s re-imagined as a youth hostel.  For reasons that are not altogether clear given his conservative bent, Yusef decides to board there – a decision that seems to constantly press on his comfort zone.  His roommates represent most punk archetypes (straight edge, skater, drunken goofus, mohawked fellow, etc.).  Their shocking approach to religion takes Yusef some getting used to.  When he realizes Rabeya (the burka wearing ‘riot grrrl’) has crossed out portions of the Koran,  she explains that the section about a man beating his wife bothered her deeply, but she’s feeling much better since taking a marker to the page.

The low-budget DIY look and energy of The Taqwacores fits in well with the punk aesthetic that the filmmakers were trying to cultivate.  Occasional visual flashes take the imagery to black and white, evoking xeroxed show fliers or punk zines from the 80’s – a nice touch.  The actors deliver well – though their believability was challenged by the simplified caricatures at times brought by the script.  The soundtrack adds verve with tunes ranging from classic Bad Brains to a dynamite rude boy version of Shariah Law in the USA by The Kominas (paying tribute to the Sex Pistols).  An interesting indication of the power of the material in its target demographic is that the fictional Taqwacore bands described in the novel have since become a reality (including the aforementioned Kominas).

The Taqwacores is an entertaining though not deeply engaging affair that delivers its simple message to question authority in a positive way.  In the end I liked the concept of the film somewhat more than the execution.

The Taqwacores opens in New York City on October 22nd. For more information and releases dates, check out the film’s official site.