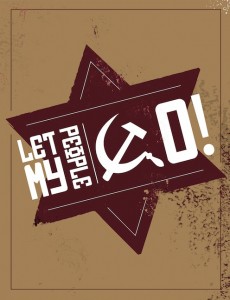 At over 600 pages with a title nearly as long, Gal Beckerman’s When They Come for Us We’ll Be Gone: The Epic Struggle to Save Soviet Jewry seems at first glance to be a book doomed to gather dust on the shelves of Rabbis, Bar Mitzvah boys and erstwhile dissidents. That is, of course, until you open it and take a peek. Beckerman has managed to take some thirty-odd years of world history (it’s amazing how much of cold war politics he crams into it) and turn it into a wholly human and vividly engaging narrative. From the moment I opened it, I couldn’t put it down until forehead-blotted Mikhail Gorbachev ended the Soviet Union, so opening the floodgates of Jewish emigration.

I had the opportunity to speak with Gal about his book. A young, good-looking softie, he is perhaps the last person I would peg as an historian. As our conversation moved forward, he kept returning to ideas that make him sound less like a truth-seeking journalist (he is a staff writer for The Forward) and more like a flighty storyteller, a spinner of yarns. That fact is what endears When The Come for Us, and prevents it from spiraling downward into historical factoids and empty platitudes. He has written a book that, if it weren’t all true, could qualify as a great story.

Your main thesis is that American efforts to get Jews out of the Soviet Union bolstered American Jews politically. When did you come up with this angle?

I started writing about the American Jewish side of it because that was the less covered side of it. People knew a lot about  the refuseniks, but there’s not so much out there, almost nothing, about the early periods like the 1960s and 1970s. People know about Natan Sharansky and all that, so I was really interested in excavating the American side of it. Very quickly I realized that that wasn’t going to be able to stand on its own narratively because it was missing the fire. The real motivation was that these people were putting their lives in great risk, creating great hardships for themselves to get out.

The American side seems very divisive, a little “two Jews, three opinions” as the joke goes.

There were a lot of emotions swirling that really kind of propelled the movement. I think that it’s telling that in the 1960s, nobody really knew what Soviet Jews wanted, but there was still this kind of excited grass roots movement of students. That made me realize how self directed it was, how much there was about “let’s do something that’s going to make us feel better about being human beings and Jews and Americans. And oh yeah, we’re saving Soviet Jews as well.”

What did you uncover that hadn’t been reported before?

If there’s anything innovative here it’s the depth, the fleshing out. For instance, we know that Meir Kahane was involved in the Soviet Jewry movement, but I went through his entire FBI document, about 3000 pages. I really tried to fill in a picture of how he was perceived by the government; what kind of actual threat he was to détente. Also, the story of the hijackers, in which a group of Soviet Jews plotted to hijack a plane and fly to freedom but were caught before they executed the plan, was out there, but I interviewed every single one of the hijackers and got their whole stories. I was able to triangulate between them. That chapter on the hijacking is really the first narrative of the hijacking that exists.

Did you travel to Russia for research?

I did spend some time in Moscow and St. Petersburg, which I kept calling Leningrad every time I was there. It was kind of embarrassing, but in my head that was the world I was living in.

Was there much documentation left in the USSR?

There’s an Israeli professor who had gone into the Soviet archives in the early 90s and found anything having to do with Jewish emigration and the Zionist movement. The archives have been closed for some time so this was vital. He took out those papers and he basically made a small kind of academic press book out of it. I opened this book and my jaw dropped because it had these transcripts of Politburo meetings where Brezhnev is saying things like, “What are we going to do about these fucking Jews?” You realized that you could make the connection between what people were hoping on the outside in terms of how much it was going to affect Soviet leaders. It actually affected them.