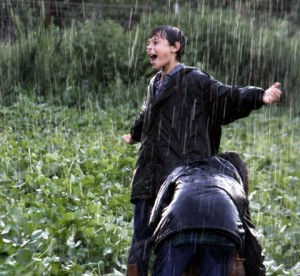 Dror Shaul’s Sweet Mud is a touching, unsparing journey through a year in the life of a 12-year old boy, Dvir, on kibbutz Bet Gvurot.

The film begins in 1974, but the kibbutz feels insulated from the geo-political tumult affecting the Middle East at the time. The biggest problem at Bet Gvurot is that someone is stealing popsicles and chocolate from the shared kitchen every night. That, and that the town would rather protect a cow-fucking dog-killer than try to help Dvir’s deteriorating widow of a mother.

Living the socialist dream, all of the children on Bet Gvurot stay in the children’s house, away from their families. The kibbutz raises and educates them while their parents work the land. But Dvir is something of a renegade. He is constantly sneaking visits to his depressed mother, Miri. As a woman without a mate and a boy without a father, they represent a situation the kibbutz can’t provide for. The rest of the other members of the closed society are unbending in their system of governance. This stringency is what eventually breaks the relationship between Dvir and the kibbutz and, arguably, would lead to the end of the kibbutz as a mainstay of Israeli society. When anyone refers to this film as “controversial,” this is what they are referring to. In the past, to criticize the kibbutz has been like speaking ill of Zionism itself.

Although the film’s misrepresentative trailer (see below) describes Sweet Mud as being based on a true story, by no means does the film feel like a dry history lesson. I couldn’t help but think of M. Night Shyamalan’s The Village the entire time I watched it–the same kind of fearmongering and generational secrecy abound in Sweet Mud. Nonetheless, it is an excellent watch that will incite plenty of impassioned discussion.

Sweet Mud will be playing for free as part of the ongoing Rooftop Films series this Sunday in New York. For more details visit the Rooftop Films website.