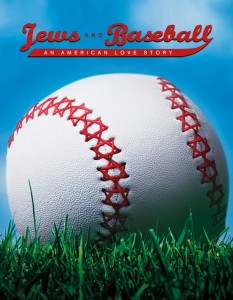 If you’re looking for a pile of Judeo-pastime trivia to tell at parties, look no further than Peter Miller’s Jews and Baseball: An American Love Story. It delivers on all accounts inasmuch as it involves Jews, Baseball and a whole lot of flag waving. Don’t expect much beyond talking heads and archival footage though; this one is a straight-forward Ken Burns-esque (literally, “Baseball”) PBS-ready doc. Just the facts. Also, although it’s extremely comprehensive, the whole film hinges on two names: Greenberg and Koufax.

Dustin Hoffman narrates this semi-star-studded (Ron Howard! Larry King!) story of the Jews’ relationship with America’s game. The narrative is the same compelling one we’ve heard about The Turn of the 20th Century Jew time and time again: after our Great Bubbes and Zaydies narrowly escaped pogroms and pillages, they somehow ended up on the Lower East Side of Manhattan and loved all things American, baseball included.

The sport, per the filmmakers, played an incalculable role in assimilating the large wave of Jews that were coming to America every day. Many Jews had no need for the religious aspects of Judaism in The New World, that is until one Jewfaced slugger, Hank Greenberg, showed an entire generation they didn’t have to choose. When he sat out on Yom Kippur in 1934 amidst a heated pennant race, he shattered the idea that you had to be a Jew in the home and an American in the street.

This revelation came about once again in 1965 when Sandy Koufax, perhaps the greatest pitcher ever to straddle the mound (and he’s ours, world!) skipped the first game of the World Series to go to shul. It’s well-trodden ground (I’ve heard these stories since I was in the womb) that is rehashed in meaningful, if unrevelatory manner.

The real fun comes in the factoids that have been overshadowed by Koufax and Greenberg. The first paid professional ballplayer, Lipman Pike, was Jewish. Almost all of the early Jewish baseball players were named Cohen, but they changed their names to avoid on-field ridicule and anti-semitism. The first racially integrated baseball game with pro players happened in a stadium in Nuremberg towards the end of WWII, and the blacks and Jews beat the all-white team. Bud Selig (oy, Bud Selig), Major League Baseball’s Jewish commissioner who expanded the playoffs, introduced Interleague Play and oversaw “the clean and the clear” ‘roid rage mess, is featured as well. Hell, there’s even a fake beard and an attempted Nazi assassination in this story. Like I said, it’s trivia city.

Unfortunately, little time is spent examining the history of the “Jews are bad at sports” stereotype and how it may have shaped generations of non-baseball players. It touches on it, but Jews and Baseball is more of a well-thought out skeleton with very little meat on it.

Ironically, by the 1970s, without anti-semitic invectives being hurled from the stands, Jews sort of lost their identity in the game. There are still plenty of dominant Jews in the game, like Boston’s Kevin Youkilis, but Jews no longer show up in waves to see them like they did for Greenberg. And that’s just fine. We’re happy to be good at a sport.