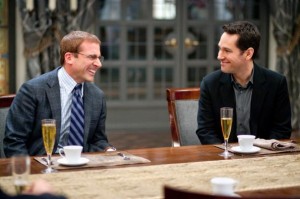 Halfway through the summer our cinematic blood lust has been sated: heroes worshiped, vampires sucked dry, minds thoroughly bent. Now, at long last, the time has come to be tickled, and director Jay Roach delivers big with Dinner for Schmucks, undoubtedly the biggest laugh-fest of the season. The plot is weak and the resolution full of tired cornballery, but just as with his other franchises, Austin Powers and Meet the Parents, Roach shows an uncanny ability to craft taut set-pieces, each more comically complex than the next. In short, I laughed my ass off.

Paul Rudd plays Tim Conrad, a “stock broker, or something” looking to rise to the heights of the seventh floor by reeling in a $100 million Swedish client. The only thing between Tim and a juicy promotion is finding an idiot for a monthly dinner held by his boss, in which a cabal of bigwigs gather to make fun of the dumbest guest. To appease his kindhearted girlfriend (Stephanie Szostak), Tim turns the dinner down until he (literally) runs into Barry Speck, a lovable doofus played by Steve Carell. An amateur taxidermist who fits deceased rodents into his “mouseterpieces,” Barry turns out to be the perfect person to get Tim’s foot in the door. As he has done consistently ever since 40-Year Old Virgin, Carell shines. Though Barry shares a number of ticks and mannerisms with The Office’s Michael Scott, there is no question that he is a wholly original take on the empathetic schlemiel.

No matter how hard he tries, Barry cannot do anything right and brings Tim to the brink of destruction. He invites over an insane stalker (played by the brilliant Lucy Punch, who probably has the most laughs-per-minute in the film), tells Tim’s girlfriend to take a hike and plays a part in destroying most of his living room. Of course, in trying to fix everything, Barry only makes things worse. The premise is as old as comedy itself, but the players make it work.

Barry Speck, in a classical sense, is more of a schlemiel (an unintentionally awkward person) than a schmuck (which seems to be applied to people of more malevolent dispositions). And then it dawned on me: the dinner is for the schmucks; the douchebags holding it. Their guests are the hapless schlemiels. Dinner for Schmucks is ultimately a morality tale about showing your true colors. If it were trying to live up to its Yiddish-sounding title, the whole of the story would serve as an open-ended joke on the viewer. Instead, it ties itself up into a neat little, feel-good resolution. The laughs the film generates in the process are big enough that you will be willing to forgive it. This is one damn funny movie.