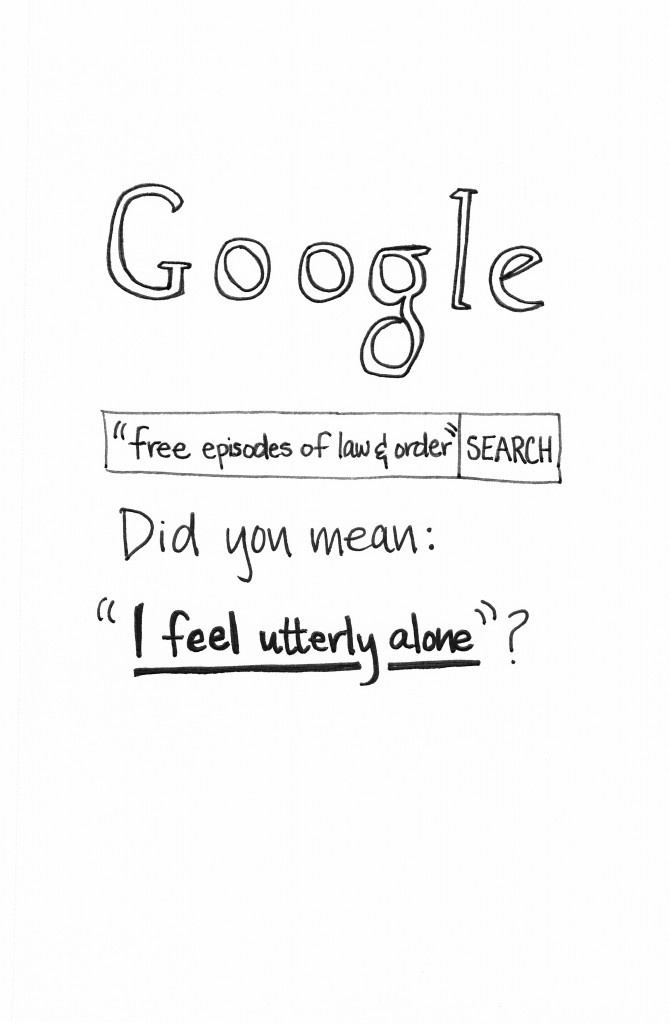 You know what sucks about being in your twenties? Everything, OK? Everything.

Luckily there’s Emma Koenig. In her fast-growing tumblr, FUCK! I’M IN MY TWENTIES (FIIMT), Koenig totally gets it. She expresses exactly the frustration we 21st century twentysomethings face post-college, giving us a little corner on the internet to go to and say, “I am not alone!”

The tumblr gained a following fast, Koenig receiving an email from editor Emily Haynes (of Chronicle Books) inquiring if she’d consider turning it into a book just two months after the first post.

F*CK! I’M IN MY TWENTIES the book out this month, featuring both posts from the tumblr and new material, Koenig sat down with me to discuss life with tumblr, Lena Dunham and chocolate babka.

Ok, let’s go backwards for a second – where did you go to school?

I graduated from NYU’s Experimental Theatre Wing in the winter of 2009.

And what happened after? What led you to start FIIMT?

I was working as a coat check girl at a fancy restaurant. At every point in your life you have a couple of convenient phrases to describe what’s going on – those phrases for when you bump into an acquaintance on the street. Once I was out of college I thought, I don’t know what to say about what’s going on because when I’m being honest I’m unloading on people – this guy screwed me over, my apartment has mice, I don’t have a real job, everybody’s treating me like shit.

And it was a slow realization that I wasn’t the only one. I’d get together with my friends and we’d freak out that we don’t know what we’re doing and everything sucks. I started feeling like maybe I can’t solve these problems but I can explain them. I’d talk these things out and in the moment grab my notebook and say, “this is what this problem we’re expressing feels like”.

Then I came up with an idea: I would have a zine called Fuck! i’m in my twenties. This was in August of 2010.
Did you start drawing right away? When did it turn into an internet project?

I spent six months trying to make it happen. In April of 2011, my boyfriend broke up with me and in this vulnerable, broken place I said OK, I have to finish this thing. I was out to eat with my family and my older brother [Vampire Weekend’s Ezra Koenig] said, “You know Emma, the internet is blowing up. Old people use it, young people use it, my friends use it. You should try to make a tumblr and if you feel like enough people like it, invest your own money in printing it.” And I thought that was a good plan.

And when it came time to put it up, you liked the organic feel of having it in your handwriting?

Yeah. Explaining the aesthetic is hard… It’s just been an instinct that I followed.

What was the first post? When did it go up?

It was on May 17th, 2011, “Ideas for how to respond when someone asks what you do: (when you’re in your 20s and aren’t living YOUR DREAM yet)”. I just remember thinking, how the fuck do you answer “what do you do?” It’s like, what I do is work at a place I don’t want to work at. That’s what I do. And I sit in my bedroom and cry. So it was a bunch of smart aleck-y answers like “vomit on their shoes” or “I’ve gotten really good at licking surfaces”.

How did people respond?

Most people didn’t know it was me. I had a couple of conversations with people who’d say, “that’s you?!” and “Oh, I didn’t know you were funny”.

Then after a couple of weeks when people knew it was me there was an outpouring of support. My cousin, who’s in a band, tweeted about it and I got 100 people following me. I remember having this really tingly feeling like, “Whoa, 100 people! I have arrived!”

Ok so when did the book deal happen?

I made this email address, [email protected], and two weeks later got an email from Emily Haynes from Chronicle Books. She said, “Have you ever thought about this being a book?” We talked and she said, “I’m gonna put together a presentation for the entertainment department and present it on Tuesday.”

I couldn’t remember being that nervous since I’d applied for college. Feeling sick, not being able to eat or sleep… That day I had this necklace I bought when I was a teenager which said “fuck”. I kept it in my pocket and would trace the letters with my fingers. I’d also scheduled a haircut – I was trying to distract myself.  I was so nervous and was rambling to the hairdresser because that’s what you do to hairdressers. I kept clutching my phone. Between Broadway and Lafayette I see the email and it’s so polite that it sounds like it’s going to be “no”. And then I see that there’s an offer. I felt like I was lifted up by little cartoon birds.

And I ran back to the hairdresser and said, “I got it!”

So why do you think people are connecting with FIIMT?

I think there’s something personal about reading somebody’s handwriting. I also think I’m not really saying anything that nobody knows. I’m just trying to put it in a form that we can all be on board with and say, “Yeah, right?”

What’s one crazy reaction you’ve had?

A friend of mine had a concert and her piano player and I started talking after the show. When I told him that I do FIIMT he backed up and was pacing and said, “I can’t believe it’s you, I can’t believe you do it!” That was the most flattering and weirdest thing. On the internet it’s about statistics and it’s hard to remember that those 10,000 notes are 10,000 people.

Do you think people will connect to the book?

I don’t think anything beats the actual book in your hands.

Alright, it’s impossible not to bring this up in the context of contemporary pop culture and subject matters you touch on… So talk about Girls.

I have always felt very connected to Lena Dunham.

Do you know her?

I don’t know her. I remember after [a screening of Tiny Furniture] thinking, I’m supposed to be writing my version of Tiny Furniture. When I was planning the zine I remember thinking I have to get it to Lena Dunham. I’ve been saying this whole year that funny girls are the new vampires. And I got really lucky that who I am in life became part of a cultural zeitgeist of the quirky, funny girl. The best friend who isn’t the ingénue. When I finally watched Girls I really liked it.

And now we’re at our most important segment of the interview. Talk about being Jewish.

I think in my life it comes up in obsessing over certain foods.

It’s this desert – I don’t even remember if it’s associated with a particular holiday or if it’s just a Jewish food. When I was little my brother would call me the babka princess because I was so into this dessert.

And even just ordering a bagel and cream cheese with lox in New York. I was saying to my boyfriend in LA [where I live], “I keep fantasizing about bagel and lox.” I can’t get a good bagel in LA.

Koenig is currently in negotiations with a prominent production company about another writer-ly pursuit, a TV pilot. On September 25th, Tumblr will be hosting an event for FIIMT at Housing Works Bookstore.