But He Plays One in the Movies 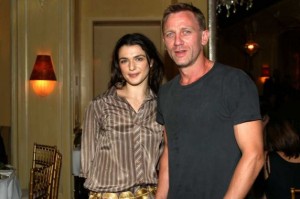 Jewdar had, of course, hoped that Weisonofsky would go the distance, but c’est l’amour. Of the two, we’d thought for sure that Aronofsky would hook up first, and with a Jewess, if only because he packed Black Swan with so many (Portman, Kunis, Ryder) you’d think it was a JDate promo. But alas, it was not to be, and instead, it’s Rachel Weisz who walked down the aisle with toy-goy Daniel Craig. Not exactly a Member of the Tribe, but we confess that given his roles as a Mossad agent and Jewish partisan, we wonder if Rachel doesn’t have little role-playing in mind.