“The Garden” Grows In Brooklyn: The Shondes Branch Out From Their Roots

Almost every word in the punk lexicon has been used to describe The Shondes.  By most accounts, rebellious, political, aggressive and controversial are the default labels for the Brooklyn born outfit. However, with the release of their newest and most cohesive effort, The Garden, The Shondes embody the growth that is connoted with the album’s title as they embrace an emotional depth and restraint that belies their punk rock persona.

As frontwoman, Louisa Solomon, winds down after a concert at San Francisco’s Café du Nord, she doesn’t shy away from dismissing the band’s punk image, which may surprise some of her more radical enthusiasts. “I don’t so much consider us a punk band, but more a punky rock band. Where I’m coming from it really feels like we are bringing a punk spirit to accessible rock, and also working real hard to make it beautiful.”  While she is admittedly splitting hairs, the distinction is tangible on the new album that masters the delicate balance between fist pumping anthems and intimate, more conventionally structured rock ballads.

The Shondes’ music always warranted attention on its own merit, although much of the scrutiny the band has received is based on a handful of songs about ending the occupation of Palestine. This position tended to pull the emphasis of fans and critics alike away from the numerous social, political and introspective themes explored on their last three albums. With The Garden, the deliberate focus on relationships and the fragility of emotions overshadows any overt political themes, serving as a thorn in the side of those looking to paint The Shondes into a corner of Israeli and Palestinian rebel music.  “I don’t think this record is terribly politically charged in an obvious way…but the bigger themes, the wholeness of brokenness, loving across chasms of pain and difference, holding on to dreams and supporting others in doing the same.  All of that has huge political resonance for me.”  Gravitating towards more universal themes, The Shondes are presented with a clearer perception of their identity.

“The Garden is in many ways the first Shondes record that feels like an accurate representation of the band.” What compels them now is not religious or political fervor, but a desire to remain true to themselves. “We feel an obligation – or maybe a desire is a better word – to be honest.  Since we’re deeply committed to justice work in a whole bunch of contexts, it’s natural that we express some of that through our music.”  And while the band embraces their heritage, Solomon admits that it is not what defines her or her bandmates.  “I’m into G-d in my own way, and I’m big into ritual and spiritual practice, but none of us are ‘religious Jews’ in the sense of identifying with a particular form of orthodoxy.”  But even with such a pragmatic outlook, she cannot help but express resistance against those with close-minded views of religion.  “I resent the idea that certain religious communities own religio[n] and the rest of us are either pagans or ‘spiritual-not-religious.’”  Yet, her cultural roots can only be suppressed for so long as she can’t help but invite my Jewish mother (who recently added the Shondes to her list of Jewish entertainers) to one of their shows.

Like Solomon’s views, The Garden is a juxtaposition of competing sounds and messages, an extension of the evolution that first materialized with Searchlights, the group’s third album and first with Exotic Fever Records.  According to Solomon, “Searchlights was the beginning of what I consider the current Shondes era.  The Garden takes the pop sensibility that we were just beginning to hone on Searchlights and owns it – plays it with more confidence and exuberance, and as a result I think there’s a more palpable emotion present.”

The emotions on display are rooted in the many symbolic representations one can take away when using a garden as a metaphor.  “We are talking about the whole idea of innocence, how flawed and relative it is, how we lack the language for describing the experience of loss, and the kinds of loss from which you don’t recover but instead remake yourself with what’s left.  So that Edenic terrain is always a huge cultural framework for this.”

The eleven songs on The Garden cover the emotional spectrum, ranging from confronting sexism in the music industry (“Sing for You”) to love and depression (“On Your Side”).  Each track is consumed with delicately composed melodies, layered with raspy guitars, bittersweet violin work, and Solomon’s dominating vocals.  Their riot grrrl influences (Bikini Kill, Heavens to Betsy, etc.) run rampant throughout the album but as with Searchlights, their most remarkable influence, and the one that provides the inspiration for some of their best songs, is the Boss. 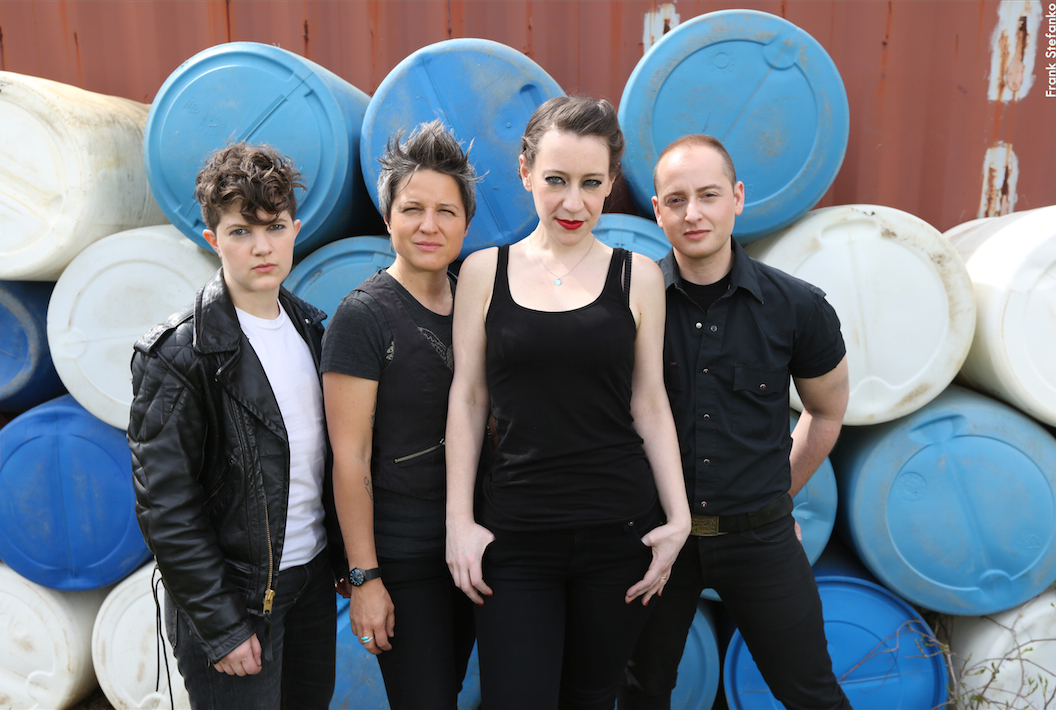 “Nothing More Whole” and “Running Out of Time,” with their unrelenting passion, are practically cloaked in Springsteen’s signature denim jacket.   You may even be tempted halfway through the emotionally charged “The Promise” to yell, “Baby we were born to run!”  However, none of the Shondes’ songs are carbon copies.  Instead, these tracks simply capture, as Solomon puts it, “a serious urgency…raucous huge energy, and huge emotion” indicative of Springsteen’s music.

Not every track on The Garden is infused with that sense of heartland rock. “Dr. Manhattan,” a dystopian, frantically paced track whose title is enough to make any fanboy’s head explode, is named after a giant, naked, all powerful comic book hero almost completely devoid of emotion.  Solomon uses this character to challenge how man perceives his own image.  “Dr. Manhattan indirectly calls out emotionally-removed versions of masculinity.”  And while The Shondes can be on the attack one minute, they can shift gears and expose their vulnerability the next. With soft harmonies and a more melodic core, “Light Me Up,” explores risks we take when we fall in love with no guarantee of receiving that love in return.

Not solely consumed with deconstructing the male ego or facing our own insecurities, The Garden also celebrates the exhilaration of those fleeting, wondrous moments in life that we try to preserve.  Perhaps the song that best encapsulates this and ultimately, how The Shondes see themselves now, is the triumphant “Nights Like These.”  With subtle introduction that crescendos into a momentous chorus celebrating those moments that keep us in awe and the desire to never let them go, “Nights Like These” reveals a band that is able to put its youthful angst aside and simply enjoy being.  Solomon acknowledges this maturation openly.  “I don’t think we, as a band, have any kind of singular message other than be alive, be awake.”  With The Garden, that message flourishes.