If you like your half-caf, no whip, soy latte with a side of conspiratorial Jew hatred, Brooklyn’s Bushwick Coffee Shop is your kind of place.

Earlier today, in a series of (now-deleted) posts and interactions on its semi-official Instagram (and, as Brokelyn points out,  mirrored on the owner’s Facebook page), The Bushwick Coffee Shop launched itself into Mel Gibsonian territory when, while praising a neighbor who didn’t sell his property to Jewish developers, decried Jews as “greedy infiltrators” who “function via greed and dominance.” And lest you think this is simply in reference to these specific Jewish developers, don’t be so sure:

I will be bold enough to generalize, and expose that I’m very displeased with this general culture’s behaviors of dominance and Illuminati sensibility 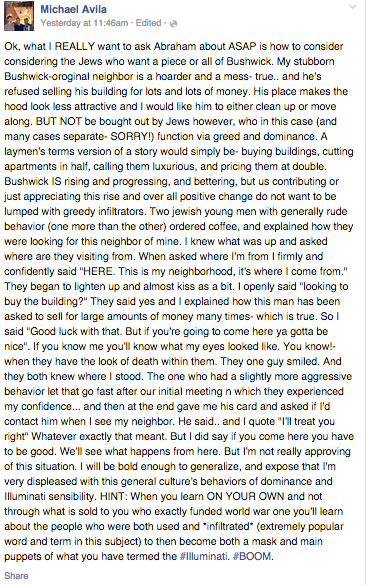 The screed and its successive comment thread has since been removed from The Bushwick Coffee Shop’s instagram account (along with, as Brooklyn Magazine has catalogued, descriptive hashtags such as: #WakeUpAndSmellTheCoffee and #Domination) only to be replaced with an example of Jews deemed acceptable according to the coffee shop’s lofty standards (“I love LOVE these Jews“):

Perhaps someone should consider switching to decaf.