Now that 5771 has come to a close, we are still looking back at the year that was. Here is the best in books from last year. 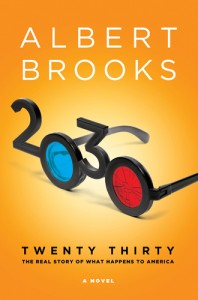 Stop me if you’ve heard this one: America is floundering under mounting federal debt; A generation is crippled by the rising cost of health-care; China begins to eclipse the US as a global superpower, and the first-time president finds himself in way over his head.

Also, cancer has been cured.
Also, Los Angeles has been destroyed by an earthquake.
Also, the president is a (half) Jew.

And so we enter the world of 2030: The Real Story of What Happens to America, by long-time comedian, occasional Pixar-voice, and first-time novelist Albert Brooks. A “what if?” with a touch of speculative fiction, 2030 isn’t our favorite book of 5771 because it’s hilarious (it is) or particularly Jewish (yup, that too) – it tops our list because, when China warned the US to “cure its addiction to debt” in August, we realized they were quoting, nearly verbatim, page 184 (seriously, look it up) of a book written almost a year before our debt crisis hit the upper stratosphere. Perhaps the Chinese government simply outed themselves as closet Brooks fans. Or maybe, just maybe, this book can tell the future… in which case we’ll get back to you in 5790.

Check out our interview with Dave

If you forced us to list our three least-favorite things, we’d probably end up settling on:

While Zombies vs. Nazis doesn’t (thankfully) detail what happens after too much Green-Curry Noodle, it does pit our first two dislikes against each other, proving once-and-for-all that two wrongs do, in fact, make a right. And, when things go very wrong, we get a book that feels very right.

All the fun of Zombies vs. Nazis, but without the Zombies. Or the fun.

That’s what we thought.

Filled with sex, drugs, and yes, even a little rock-and-roll, Life is the definitive rock story, straight from the man who did it first, and did it best.

But seriously folks: A husband, his wife, their two adorable kids, and golden retriever walk into a talent agent’s office…

8. Moonwalking with Einstein: The Art and Science of Remembering Everything, Josh Foer (Penguin Press)