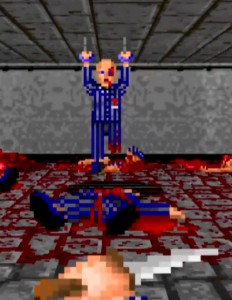 For four years, a team of programmers from around the world has been working to build a mod (or modification, for you non-nerdy “outdoor” types) of the classic 8-bit shooter, Wolfenstein 3D. Titled “Sonderkommando Revolt,” the game features a Jewish protagonist who escapes from certain death, seeking revenge by killing Nazis and rescuing as many Jews as he can. The game was to officially be released in January 2011, but that all changed two weeks ago when the team released a trailer for the game that shocked many humorless viewers.

The trailer shows off shots around the concentration camp, some of which get about as graphic as an 8-bit game could. The “money shot” that has bound the panties of international blowhards features piles of dead Jews, stacked like dirty laundry behind a cage, their gore hanging out. Upsetting? You bet. Anti-semitic? That’s the question that has forced the team to shut down the project for good, thanks in part to some pushing from the Anti-Defamation League.

We got in touch with Maxim “Doomjedi” Genis, the Israeli architect of the project and its only Jewish programmer. After only a short while in the spotlight, he has been broken by the attention his trailer has brought, forcing him to abandon the game he put four years of his life into.

Despite having no anti-jewish elements or intentions in this free pixelated mod of an 18-year old game, the project is declared cancelled at this point.

I mentioned that, as a Jew, it can be tough to be called an anti-semite, noting that we get accused of it all the time at Heeb.

The project is cancelled because I cannot stand media exposure of any kind. I’m in deep emotional trauma (very deep), and need time to recover. I cannot start recovering before the spotlight of the world is turned off me. I’m dealing with it alone (living alone) — and it’s 100 times harder.

I note that Quentin Tarantino received high praise and honors from even the ADL, who has taken umbrage with Doomjedi’s game, for his Inglourious Basterds.

There are very big differences. I didn’t do this for money and exposure, and I have no internal emotional powers to deal with the press, the violation of my personal privacy and life , etc. Tarantino could have expected the buzz and wanted it…and knows how to cope with it. What can make Tarantino happy can devastate me completely, emotionally and on every level.

But what of the rest of the team? Perhaps they had an axe to grind with the Jews?

They didn’t think there would be such controversy, as you play a Jew against Nazis, not the other way around… Mods are never to have an agenda, political, religious or historic — this is just part of modding (not only Wolf3D) ethics and unwritten rules, and none of the team members would have participated in this project in the first place if any agenda had been involved… As it’s a primitive pixellated mod of an 18-year old game we didn’t expect much exposure (beyond the limited community of people who still play Wolf3D mods), and were not ready for it when it came. This was totally out of proportion.

Yet, making this mod, all Team members (and the rest of them are not Jewish) admit they’ve learned a lot about the Holocaust (and the Sonderkommando Revolt), much more than they knew before. That was unavoidable I guess in a 4-year project.

No one took this mod as exact historic representation. That’s not the way people relate to Wolf3D mods at all, and the Wolf3D engine is too limited anyway to make an exact representation of anything. Even if it could, it wouldn’t be interesting and challenging to play. It did make them open the books and read and learn about the REAL Holocaust, something some of them didn’t even know about before.

The ADL can find something else to be worried about, rather than some simplistic pixelated Wolf3D mod with no anti-Jewish agenda, element or intention in it.

We couldn’t have said that last bit better ourselves. One last thing. Doomjedi asked me to share the following message:

Please mention the fact that public spotlight has caused me much emotional suffering, and I’d like to request people/press/media not to request any additional interviews or clarifications from me and to allow me to recover from the spotlight and get back to my normal life out of the public radar. I want to keep this behind me, and so I ask others to do the same. I have nothing I want to add to this matter.

So there you have it. Heeb got the last interview on this matter, ever. Here’s hoping that that’s not true, because I for one would love to take Sonderkommando Revolt for a spin.