Are you There Michele? It’s me, Megan 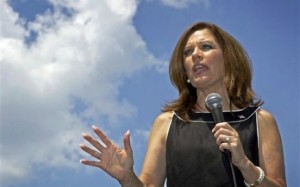 I emerged from my hurricane bunker (my uncle’s cozy apartment on the Upper West Side) to news that you had been commenting on the nature (haha, get it?) of Hurricane Irene’s origin. I for one was not surprised to hear you say the hurricane was a message from God, because I already thought so myself. It may surprise you to learn that even I, a full-fledged liberal living in Heathentown, USA has known for some time that God personally intervenes in our lives on a daily basis.

We’re very close, God and I. A first name basis sort of thing. So after the hurricane, I called him up. “So,” I said to God, “Do you think Washington finally got the message about all that crazy spending?” God sighed, exhausted from a weekend of hurricaning, “I don’t know,” he said, “Maybe they never will.”
“The fools,” I replied, “They probably don’t even realize this whole thing had anything to do with them!” I could hear God shaking his head on the other end of the line. “There was one,” I said, “that Michele Bachman, she knows the score.” You could hear his mood begin to lighten. He chuckled that God-laugh of his, the one he lets out when he’s about to brag about one of his favourite children. “That Michele,” he clucked, “She never lets me down. What I neglected to give her in logic and reasoning skills, I made up for in wit and tenacity.” “And eyeballs!” I added. We both burst out laughing. “But seriously,” I said, “Thanks for sending her to us! Is she going to be the next president?” He wouldn’t tell me, he never talks to me about the future, but we were soon caught up in a different conversation about Battlestar Galactica. Neither of us can get over how good that show was! The two biggest commonalities God and I share are our love for BSG, and you.

So you see, we’re not so different, you and I. We have different paths in life, to be sure, but they are equally God-inspired. God called upon you to practice tax law, to settle down with a nice husband, and now to run for president on a Tea Party platform. God called upon me to move to New York City, sexually experiment in my early twenties, and register as a Democrat. He has recently called up me to start blogging, and so here I am, dutifully following his orders.

You don’t have to get embarrassed when you say things like God sent the hurricane as a message, you don’t have to pretend you were joking. Because you’re not alone. I understand where you’re coming from. I know that God shook those idol-worshipers in Haiti and personally infected each of those gays with the AIDS, because he loves us. I know it must be tough for you, Michele (can I call you Michele?) being the lone voice of reason amidst a sea of loony scientists, lame-stream media watchers, and coffee drinkers, but keep your head high and stay strong. Don’t back down because you may have said something that the faithless may not approve of! Follow the lead of those prophets before you, climb up on that mountain, and yell your message even louder, right in their godless faces!

And if at times it feels like people are laughing at you, and maybe you aren’t being taken as seriously as you deserve, remember: God works in mysterious ways. But he won’t let you fail.

Unless, of course, you deserve it.

Megan Sass is a natural redhead. She is also a writer, actor, and Hebrew School teacher. Turn-ons include: Boxer Dogs, Falafel, and and Fanboys (especially those residing in the capital of the DC Universe). You can follow her on twitter at @Megan_Sass.