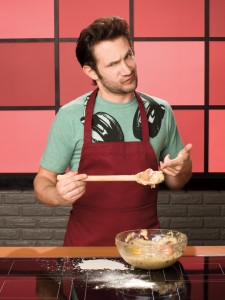 Historically, Jews have stayed away from teaching the public how to cook. Sure there is Joan Nathan, that tiny-nosed bubbe who wrote a vague text about Jewish cooking that was more a study in “Jewish anthropology” and “culture” than it was about how long to soak grated potatoes in salty butter water before frying them up into latkes. There is the Jew-friendly Travel Channel that employs Adam Richman of Man vs. Food and Andrew Zimmern of Bizarre Foods. But those two pudgy punims don’t really teach as they do show off their immense appetites for anything reasonably sized they can shove into their gullets (edible isn’t always a requirement). On the celebrity food industry front, we stick to what we do best, eating everything in sight and describing what it feels like in our mouths loudly so that people sitting comfortably in their homes can hear.

But then, from the depths of Boro Park in Brooklyn came Joshie Berger, a Jew who on national television admitted to being one of the Worst Cooks in America when he joined the Food Network show of the same name. The show, now in its second season, gathers terrible cooks from around the country and separates them into teams led by celebrity chefs/hardasses Anne Burrell and Robert Irvine. They are weeded out in weekly cooking challenges until on person from each team competes in a final challenge in which they cook for a panel of food critics. The grand prize is the equivalent of one semester of Jewish Day School: $25,000.

Berger’s bravery, his ability to take direction, and dedication to the competition (he has cried on camera more than once) got him a slot in the final two. He will soon face off against wide-eyed Madonna-armed mom Georg Coleman, who, sweetly, just wants to be able to make her daughter enjoyable lunches. Berger may not have a kid but he has every Friday night for the rest of his life to become a better cook, and a culture of people who will shun him if he doesn’t learn to love food. That may just be the better motivation.

It all goes down this Sunday at 9 pm on The Food Network. Let’s hope for a brisket related challenge.

You grew up in an Orthodox household in Brooklyn, but tell me a little bit about your upbringing. What was your neighborhood like? Were you friends with non-Jews? Were your parents strict?

I grew up in Boro Park, and my parents were from Israel, so while my father wore a shtreimel and appeared like a regular Hasid, we were a tad more liberal. I think in 5th grade my mom wanted us to get a semi-decent education so she wisely tore us out of our Hasidic school and put is in a less Hasidish yeshiva. As is the norm in these neighborhoods, I had no non-Jewish friends and was even discouraged from hanging out with kids whose yarmulke wasn’t up to par (leather and knitted of course not being materials appreciated by God). I was the oldest child and was showered with love from my parents. I really can’t complain about anything they did, or positions they took and enforced. They are simply the product of a system set in motion hundreds of years ago that hasn’t been checked.

Describe to me the first time you ate something that wasn’t kosher? What was it? How did it feel?

I will never forget, it was a chicken cutlet. I love chicken, it’s my favorite food and especially schnitzel like my mom makes. I was so nervous, I recall asking my friends so many questions, they thought I was crazy; is it a normal chicken? There’s like no pig in it? Is there anything like in between the bread crumbs and the chicken? Then I had my first bite and it was just a damn chicken cutlet. I was surprised, but the transition was fluid. I have tons of ex-frum friends who have mental blocks and feel nauseous when food isn’t kosher, that was never the case for me. I don’t get their disorder.

You’re probably the only Jew in the world who would admit to being a bad cook and a picky eater. Have you faced criticism from other Jews because of this particular quirk?

I think this whole Jews being good cooks is a misnomer based on all the holidays and how often cooking takes place. But I don’t think that necessarily translates into someone being a good cook. My mom happens to be a superb cook and every Shabbos we would have a litany of friends come over to join the tail end of our meal and escape their mom’s awful chulent. And to be honest, since starting to eat non-kosher I cannot find a kosher restaurant that I would order a steak in. Sure, there’s a handful of dishes that via trial and error we have perfected over the generations, but for the most part Jewish food simply kills you faster, without improving the living part by that much.

As for being picky, yeah, I guess that isn’t a Jewish trait. But I was a bratty kid and was disgusted by most foods even back then. I hated that nasty jelly thing called galla my brothers would slobber over, I was repulsed by tongue and even hesitated to start putting tahina on my falafel balls cause I hated dips and stuff. So I had a head start on the whole being picky thing. But I am getting much better, I even stopped using 5 different plates when eating cause I don’t want anything to touch anything.

I was excited to see that you have made it this far especially considering your lack of adventurous eating before the show. What do you think you had that the other contestants who were voted off didn’t have?

I believe I was ready to be booted off the show within the first few episodes if I didn’t adjust my entire attitude. There are only two exciting things in the life of a frum kid: Purim and summer camp. While I have Halloween now to more than compensate for Purim I miss summer camp like crazy. I was into everything from sports to acting to drawing to playing drums to just loving the whole vibe of the thing. I think I showed up to boot camp perhaps trying to make up for lost camp time. I was genuinely giddy to meet new people, share stories, engage in activities and be loud. Then along came Chef Anne. All her quirky, fun and bouncy ways in the kitchen aside, she is a very demanding and sincere person when it comes to her craft. She respects what she does and rightfully insists you do as well. I quickly realized that my shtick was not gonna fly with her at all.

I made it a point from then on to undo the damage and gain her respect. I think she realized I had A.D.D., A.D.H.D. and many other letter combinations and was really making an effort to stay focused and adjust to her style and ways. I think she appreciated that and we saw eye to eye. There is no greater motivator to learn than to feel respected and appreciated. I felt she was very fair to me, even when she was most critical and I really embraced the opportunity I was afforded. I’m not sure other people, who didn’t have 18 years of Yeshiva life behind them, where able to evolve so fast from week to week. Thank you Darwin.

What’s next for you? I know you can’t tell us what happens on the show, but what are you doing post-show? Did the show awaken a desire to go on a shrimp boat? Write a cookbook about matzo ball seafood stew?

This entire ordeal was life changing. I am in the kitchen all day, improving my skills and getting rave reviews from people. I love cooking and I will find a path in life that reflects that. I have added twists to traditional heimishe foods and have many of my own creations. I freak out if I’m out of fennel. When I showed up to boot camp I didn’t even recognize it and asked Chef Anne “what’s with the retarded onion?” I think my experience can help others and I will make sure to share this with others. I cannot express to you how grateful I am to Food Network for this opportunity. I have nothing but kind words towards everyone along the way from the people who lived with us to the producers to the camera and sound people. Even though I’m secular and hate the term, I feel blessed to have had this happen to me. L’chaim.