Adolf Hitler Is Up for Adoption 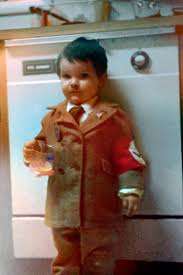 A New Jersey court ruled Thursday that Heath and Deborah Campbell will not regain custody of their children, Adolf Hitler, JoyceLynn Aryan Nation and Honszlynn Hinler Jeannie Campbell, according to the Philadelphia Inquirer.

Adolf and JoyceLynn are of course named after Adolf Hitler and the Aryan Nation, respectively, while Honszlynn is named after SS leader Heinrich Himmler. Oh, did I mention Heath and Deborah Campbell of Hunterdon County are illiterate?

Many people have assumed the children were taken away from their parents because of their unfortunate names. That, however, is not the case. No, Heath and Deborah Campbell are allegedly abusive, neglectful and, as you can see from Honszlynn, horribly illiterate.  According to court records, the two are also both physically and psychologically disabled.

One of the main pieces of evidence used to prove the Campbell’s are not fit to parent was a horribly misspelled letter Deborah Campbell wrote and gave to a neighbor. “Im afread [sic] that he might hurt my children if they are keeped [sic, again] in his care,” Deborah Campbell wrote. “He teaches my son how to kill someone at the age of 3.”

The worst part about it is that they won’t be able to find out about half the funny shit people are writing about them.