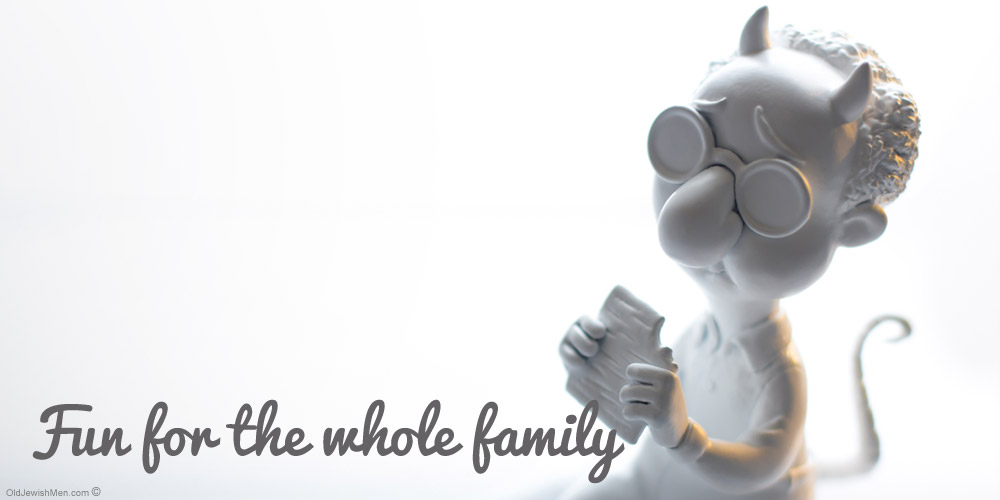 When I was seven or eight, I hated going in to the locker room at my local JCC. It was dingy, awkward, and presented, to my mind, an unnecessary step between “show up” (I would arrive already wearing my swimsuit) and “do awesome cannonball in to the pool”. It was in this JCC locker room that I had my first, and most vivid, introduction to old Jewish men. Real old Jewish men: Hairy, grouchy, vulgar, and very naked old Jewish men. As a child who just wanted to go swimming, they both frightened and fascinated me.

It was that same sense of fear and fascination I felt tingling in my temporal lobe when I first came across Isaac Buchman’s Old Jewish Men. With names like “Moishe Shluffen” and “Itzik Shmitchik”, the illustrations in the series are both strange caricatures and heartfelt homages to our next-to-immediate forefathers; They exaggerate characteristics, highlight stereotypes, and ultimately pay genuine tribute to the generation which left such an indelible mark on me as a child (A generation, it’s worth mentioning, that is quickly vanishing). Heeb sat down with Isaac to learn more about Old Jewish Men, where it came from, where it’s going, and why Old Jewish Women is out of the question. 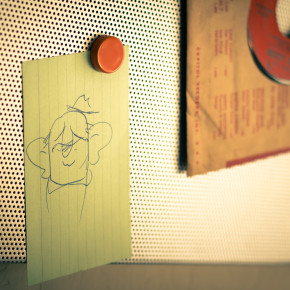 First off – who are you?

I’m Isaac Buchman, an independent artist. I grew up in Israel and moved to New York City about 6 years ago. Yankel Farkash, my partner in crime, is a childhood friend of mine. He actually just moved to The States last year to study animation. We met Courtney Bernard about a year ago- she’s an amazing illustrator who just moved to Brooklyn from Michigan.

Tell me a little about Old Jewish Men – what is it? Where does it come from?

That’s a good question. It started from a very innocent place. Yankel and I were always obsessed with everything that is associated with Old Jews. Their unique look, their miserly approach to life, their delicious food, and… their bad Yiddish jokes.

One evening I called Yankel with this question: “What if we made trading cards like the “Garbage Pail Kids” from the 80’s but with old Jewish men instead?” It was probably the worst idea I ever had but, weirdly, he was extremely excited by it. We decided we had to carry it out.

Why “Men”, though? Why not Old Jewish Women?

Women, in general, are much more challenging to draw than men. And I doubt anyone would feel comfortable laughing at someone’s Bubbe! We’ll never be able to create “Old Jewish Women”; the guilt would kill us. 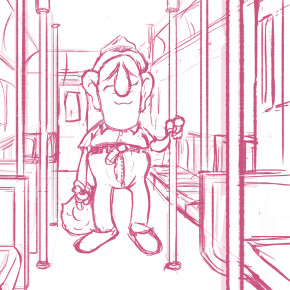 How did you develop the look of the project? You already mentioned Garbage Pail Kids, which I can definitely see. I also see a little John Kricfalusi with some of the old Harvey Comics thrown in.

This is essentially a parody on the Garbage Pail Kids, so I’m glad you can see the resemblance. We did not intend to imitate John K. but we are all big fans of his work, so I’m taking this comparison as a compliment. John K., as you can probably tell from his work on Ren and Stimpy, always encouraged artists to celebrate imperfections and the things that makes a person, or an ethnicity group, special. We definitely agree with that approach. 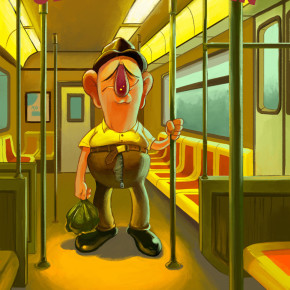 At the same time, while we wanted to make our characters exaggerated, we did not want to go too grotesque. It was very important for me that they will be appealing and adorable, just like real old Jewish men.

So what was the process for bringing each character to life?

Some of the characters were sparked by a round of free-associating in Yiddish, which helped us come up with a name. We would then try to visualise how the old Jew with that name would actually look. This is how we came up with some prodigious names like Manischewitz Menashe and Sponge Burstyn Square Tuchus.

For some of the other characters, we seeked inspiration from old Jewish-American pop culture. For example, Zeide Zulu was inspired by a Broadway show from 1965 with a similar name, and Itzik Shmitchik was inspired by a song from the 40’s performed by Jazz musician Mickey Katz.

When we began this project, we decided what kinds of characters we wanted to cover.  Moishe Shluffen and Manischewitz Menashe are examples for old Jews that fall into the “adorable” category. Blood Libel Leibowitz and Jew Down Joseph are obvious parodies on the infamous Nazi propaganda. 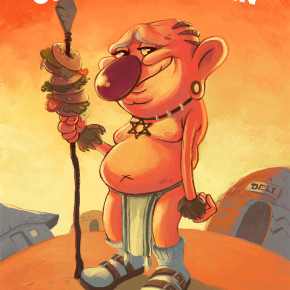 Zeide Zulu was named after a show? I’ll admit, when I saw it struck me as a little out of place. Of all your characters, I would guess it’s probably the most likely to offend both Jews and non-Jews alike. What do you know about the show it was based on?

“The Zulu and the Zayda” was a musical comedy starring Ossie Davis and Menasha Skulnik, two fantastic actors. It told the story of a Jewish grandfather who moved to Africa with his family, who hired a member of the Zulu tribe as a companion for him. The show described their bonding and was heartwarming.

In regards to our print “Zeide Zulu”, we actually barely received any negative feedback on it. People seem to really like him.

Believe it or not, the one who attracts fire the most is not “Blood Libel Leibowitz” as I would have expected, but “Jew Down Joseph”. He’s really responsible for the majority of the hate mail we’ve received. And I can see why. While subjects of the ridiculous Nazi Propaganda like “blood libel” feel pretty distant from us, the derogatory term “jew-down” is, sadly, still being used today.

What other of reactions have you gotten? I’d guess some people totally get what you’re trying to do, and others…not so much.

I am actually surprised by how much love we’re getting. Considering the sensitivity of the subject, I was not expected to gain much of a following. But the prints are selling, and we’re actually receiving some fan mail! So I guess some people can see it in the same way we do and connect to this.

We are, of course, getting some hate mail for the obvious reasons; anti-semitism is, of course, taboo. And to be honest, I can completely understand it when a person from an older generation is offended by our project. For some of these individuals, the portrayal of an old Jew such as in “Blood Libel Liebowitz” is not just a joke, but a painful memory. It takes a buffer of several generations to be able to address the subject as straightforwardly as we younger Jews can. So I’d like to apologize if we have hurt any actual old Jewish men, or women, or non-Jews. We have nothing but affection toward them- truly.

It’s interesting that neither you nor Yankel are American. Do you think the fact that you’re both Israeli contributed to the project and its willingness to push the envelope? Lovingly, of course…

I can say definitively that we’re not as restricted by “political correctness”, which is truly an American creation. But I think it’s even more simple than that: Yankel and I just had the good fortune to grow up around lots of old Jewish men. You just don’t meet many of them nowadays, and I’m referring to the type that actually came from the Old World, from a shtetl. As time goes by, they’re becoming more and more rare. We genuinely miss them, and that is what attracted us to this project first and foremost.

Where would you like to see Old Jewish Men go in the future?

Well, there has been discussion about featuring our prints together with sculptures in an exhibition. The concept for the exhibition is pretty intriguing- we would examine what the world might be like if the entire Jewish population would have been wiped out during the Holocaust, as Hitler had intended. Imagining that Jews have been extinct for decades, we would then try to reconstruct what they were like based on objects that were left behind, like artifacts and the media’s portrayal of them. Kind of like how paleontologists reconstruct what the dinosaurs were like. This is still in discussion so nothing is final yet. In any case, I have a feeling that this is not the last time that we will be using this subject in our art. 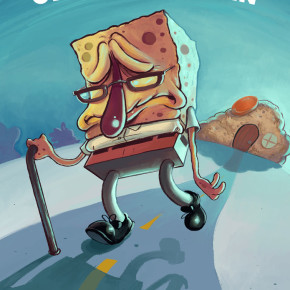 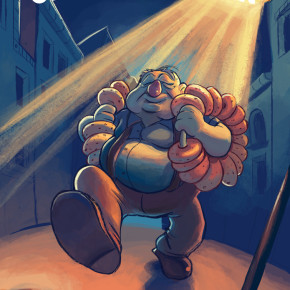 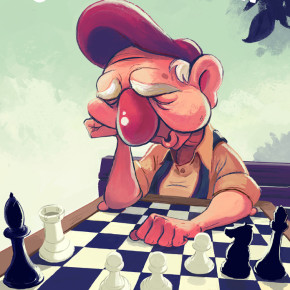 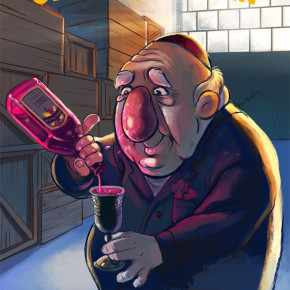 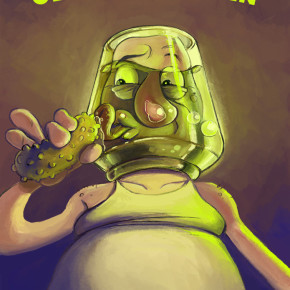 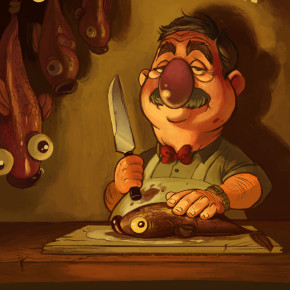 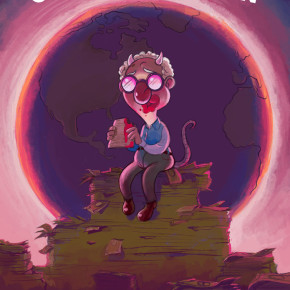 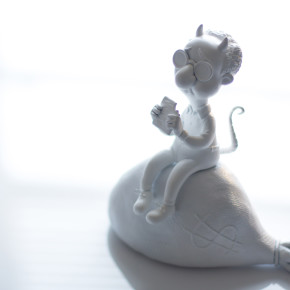