A Gun For Every Jewish Man, Woman, And Child In Europe? What Could Possibly Go Wrong?

These are dark days for the Jews of Europe, nobody can deny it, not least me as one of them. I go back and forth between worry – “what if it really is going to end soon?” – and doubt – “is it really that bad?”

But it is clear that some change has to come soon, that Europe’s politicians have to show their commitment, that words of solidarity can’t remain just that, words, and that the broader non-Jewish world must show they care. So yeah, something must happen. And Tablet’s Liel Leibovitz knows what exactly: “every Jewish Man, Woman and child in Europe should get a gun”

Now Tablet’s bread and butter is often hyperbole – “hyperbole: just how bad for the Jews is it?” – and Leibovitz, though I hear nice things about his Cohen bio – seems to go have gone full Jonah Goldberg as of late. And yes, he is quite serious. He refers to Rabbi Menachem Margolin of the European Jewish Association (a Chabad front organization, though Liebovitz doesn’t mention that) who asked for European laws to be changed so it becomes easier for Jews (and just Jews?) to carry arms.

Liebovitz concurs, because liberal measures do not work against the “savages” that committed the recent and not-so-recent massacres, he writes. Now this approach isn’t unfamiliar to me – a couple of American friends have told me about their conservative parents back home who think the same. Leibovitz himself is Israeli, where a more martial approach to problem-solving is not uncommon.

This of course has nothing to do with me. Because here is the thing: the problems of safety could very well be solved by more security, by more guards, deployed either by the Jewish communities themselves, or the state. 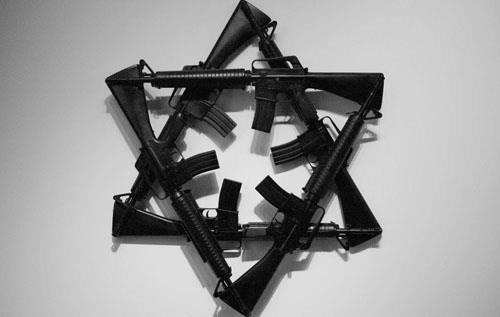 Europe is not a gun continent. I’ve never seen a civilian handle a gun in my life, or many police for that matter. Not to warm up old stereotypes but yes, I would definitely shoot myself in the foot.

There also already is a strong security presence around Jewish institutions: every shul, Jewish school, supermarket is guarded by policemen and additional, independently hired security personnel. It’s in fact become a dark joke: when you’re for a Jewish spot just look for bored policemen nearby. (This started in the late 60s when not neo-nazis but leftist extremists wanted to blow up a number of Jewish buildings over West Germany)

And most heavily guarded are the Chabad houses, by sullen Israeli dudes who don’t even tell you their first name. (It’s probably just Yoni. It’s always Yoni.)

But it’s not like Leibovitz truly cares what I think. It’s clear from his piece, which doesn’t even try to speak to me or other Jews from Europe. He doesn’t know what we’re feeling exactly – if we perhaps consider ourselves so European we stay even when things get that rough – because he’s decided he already knows. And now he’s explaining it all to his conservative US readers and reproaching what he imagines his liberal readers to be. (It’s probably no wonder the Margolin story was picked up by Breitbart a few days ago.) So the Jews of Europe are condemned to silence. What else is new?