What’s Wrong With You: Questions, Rude and Implied 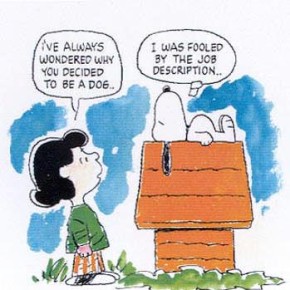 I’m an actor who works as a waiter to supplement my income. I’ve had small (read: tiny) roles in two Broadway productions as well as supporting roles in indie films that played at major festivals, and as a waiter at a four-star restaurant I make very decent money. But I define myself as an actor–when people ask me what I do, I say I’m an actor and they don’t usually challenge it. Once in a while, though, an asshole comes along like the self-righteous doctor I met recently (in a social setting) who insisted that “What do you do?”, which I find offensive to begin with, is a question about how you make money, and therefore I’m supposed to say I’m a waiter. (In which case shouldn’t he have just said “trust fund jerk”?) I didn’t waste my vocal chords arguing with him, but I wished I’d had a snappy comeback. Later that night, Heeb came up in a conversation with a friend, and I thought of you: got any snappy comebacks for me for next time?

A snappy comeback will still be wasting your vocal chords, but that doesn’t mean it can’t be satisfying and fun. So let’s examine the specific type of asshole you’re dealing with: an entitled brat who A) thinks he’s better than you because he chose a low-risk, upper-middle-class-income path, and B) has buried creative ambitions he’s either afraid to pursue or intends to pursue when all his other status markers are in place–i.e. not anytime soon, and as a monthly Sunday hobby, if ever. Had your adversary been stomach-able to talk to, I guarantee you’d have heard all about how great he was as the Mayor of Munchkinland in his high school production of The Wizard of Oz. Finally, C) he uses labels to foreclose on topics he’d rather not explore: you, sir, are a waiter, end of story.

You could force the topic back open, but you’ll never budge his mind, and if spontaneous one-liners aren’t your specialty (if it’s any consolation, I spent most of Monday writing this column), you’ll resort to expletives, he’ll volley them back…. an ending that’s not terribly exciting to tweet. My suggestion won’t rock the Twittersphere, either, unfortunately–it’s subtle–but it gives you control. Seriously, he was asking how you make money??!!?? Instead of answering, attack the question. Neutralize the weapon. Or simply say you misunderstood.

Let me know how it goes. And if anybody has a snarkier idea, please let us both know.

Yesterday afternoon this guy I’ve been dating for a month texted me to see if I wanted to have dinner with him and his friend. I said sure, and then he texted back, So you’ll make your pasta and lamb sauce? As if I’d already agreed to be the chef. Am I wrong to feel like that’s a little manipulative? I ended a four-year relationship in February, so I don’t know if new guy’s just a different personality, or if I’m dealing with problematic behavior. Also new guy is a little older than me–twenty-eight to my twenty-three, and ex was my age. My friends like new guy, but he’s starting to hint that we should be exclusive, while they think I’m rebounding and it won’t last. I really could use an objective opinion about what I might be getting into.

Not Sure about New Guy

Might? You’re 99.99% definitely getting into exactly whatever dynamic you were in before. It may look different on the surface–new guy’s older, farther along in his career, more comfortable with himself. But I’m talking about your core, must-have-boyfriend-to-measure-self-worth dynamic. At twenty-three, after a relationship that began in your teens, you shouldn’t be looking to snag the next nice-enough, friend-approved dude who comes along–you should be looking to bed the next ten. Or at least feel the urge to, regardless of whether you’d act on it. Sample the buffet until you know what you want; all you’ve done so far is eliminate a single possibility.

For future reference, then, superfluous manipulation isn’t always the harbinger of the lying, abusive variety. If a man can’t sweetly ask you to cook as a compliment to your food, though, what happens when he’s unhappy with your sex life? I’m curious how new guy plans to propose exclusivity, for that matter, but unsolved mysteries are a fact of life. The more important mystery is you–your hopes, dreams, ambitions–and you won’t discover them if you’re busy deciphering and catering to somebody else. Please do your future self the tremendous favor of staying single for now, until your dating decisions feel like your own.