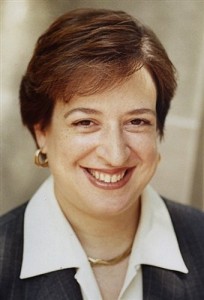 Jewdar wants to wish a Big Mazl to Elena Kagan on her nomination as Supreme Court Justice, which would bring the number of Chosen chosen for the bench to three, or one third of the total. What a country this is, where in less than a hundred years, we’ve gone from debating whether there should be a Jewish on the bench to whether there should be a Protestant.
Still, happy as we are for her, we do have our concerns, since, while we’re all for equal rights, she is precisely the kind of candidate likely to draw the ire and opposition of the Republican base — and we don’t mean because she’s a woman and a Jew.  In a perfect world, of course, who she is shouldn’t matter, but there’s a time and place for everything, and we’d prefer if Obama had tapped someone whose identity didn’t bring with it so much political baggage. I mean really, did he have to pick a kohen? We’re just waiting for the Fox News crowd to start crowing about how this is just another example of Democratic elitism.