The Rugelach Party: Jewish Teabaggers and Jews for Palin

Republican polling firm McLaughlin & Associates (endorsed by The Washington Times and other papers founded by the Moonies) claims American Jews are turning away from Obama, with the implication being they’re pissed because of the pressure he’s putting on Israel. 46 percent say they’d consider voting for someone else. In fact, the actual question as it reads on the McLaughlin website, is “Would you vote to re-elect Barack Obama as President or would you consider voting for someone else?” Can you believe the manipulative, bullshit phrasing employed to score GOP-friendly results? Unless you’re Michelle Obama, why wouldn’t you "consider" voting for someone else? Let’s look at a few more of the poll’s even-handed, fair and balanced questions [emphasis Heeb‘s]:

Do you approve or disapprove of the Obama Administration supporting a plan to recognize a Palestinian state within 2-years regardless of whether or not Israel agrees? [And when did this plan get announced? When the hell did Obama ever say that?!]

Should Jerusalem remain the undivided capital of Israel or should the United States force Israel to give parts of Jerusalem, including Christian and Jewish holy sites, to the Palestinians? [Don’t Muslims have some holy sites, too? Dome of the Rock, anyone?]

Do you think that if the Palestinians were given their own state in the West Bank, part of Jerusalem, and Gaza they would live peacefully with Israel or continue their campaign of terror to destroy Israel?

Those sure sounded unbiased and non-leading, huh? And the sample size of this professional poll? 600 Jews. No, not six thousand. Hundred. That’s nothing. Plus, all interviews were conducted on the latest in high technology: randomly chosen telephone numbers of land lines, and that basically cuts out the entire under-30 demographic which mostly uses cell phones now. But common sense isn’t stopping right-wing libertarian blogs. In hopes of snagging votes down in the Holy Land of Ancient Jewish Power, i.e., Florida, The National Review Online, US News and World Reports and others are running with these very suspect results. Even the left is taking this crap seriously.

Roger L. Simon of Pajamas Media takes it all a step further with "Break Out the Borscht: Jewish Tea Parties Coming?" He notes that Obama won the presidency with 78 percent of the Jewish vote, and that “difference of 32 percent between now and then.” Yes, Pajamas Media, there is a 32-point difference, but between two entirely different things. One is how those Jews voted in 2008, the other how they’re considering voting next time. And by the way, isn’t that how a republic is supposed to work. Citizens are meant to listen and consider all the candidates, not just pump up the Limbaugh and vote one party forever. (You might remember Pajamas Media for thoughtfully sending Sam "Joe the Plumber" Wurzelbacher to the Gaza strip. ("Being a Christian I’m pretty well protected by God I believe," said the Pajamas Media war correspondent.)

Simon then takes the opportunity to employ logic worthy of the Tea Party: Obama’s hard stance towards Israel is “purely personal” Simon writes, and Secretary of State Clinton is “fueled by personal animus” against her husband. Yeah, that’s it, Simon. Hillary’s clearly still upset with Bill for letting a zaftig Jewess suck his member over a decade ago. Now she’s getting her revenge by screwing over the 6 million or so Jewish Israelis Bill loves. Makes sense.

Riding this wave of faulty data and hysteria comes an all-new lunatic fringe: Jewish Americans for Sarah Palin. Founder Binyamin Korn, former director of the Zionist Organization of America, dismisses the notion that the unofficial Tea Party leader and former Alaskan Governor Sarah Palin is a religious freak obsessed with biblical prophecy (in which Jews burn in Jerusalem while righteous Christians rise up to Heaven where they’ll enjoy a monster truck show with Jesus). According to Korn, “Whatever motives Governor Palin may have . . . are entirely within the mainstream . . .” Also entirely in the mainstream? Palin’s Tea party. So to those 246 Jews "considering" voting for another candidate, also think about this: Do you really want to be in bed with these guys? 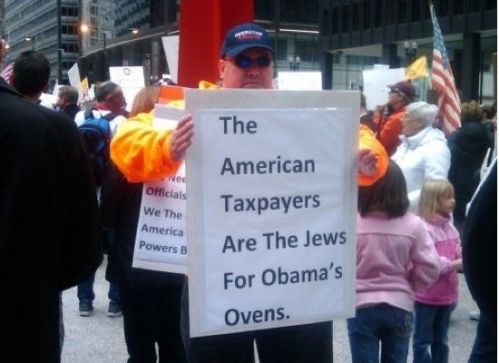 Above: Reasonable examples of mainstream politics.