Just in time for his birthday, Constantin Film, Downfall‘s distributor, has screamed copyright infringement and pulled all of Hitler’s finest moments off YouTube, screwing itself out of an incredibly successful free advertising campaign. No more “Hitler Angry About Obama’s Tax Policy” or “Hitler Mad at Jay Leno.” 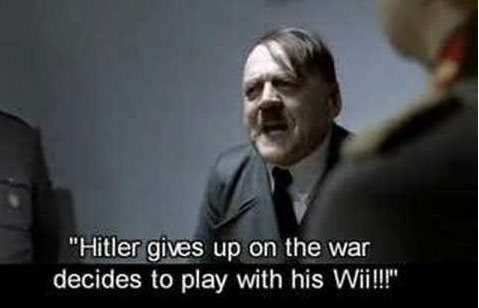 Der Fuhrer may never throw another fit over the Xbox.

Even though you’ve lost the land of YouTube, Hitler, your meme still rules the masses. You’re sure to invade and conquer another piece of the culture map soon. Happy 121st.

The Hitler Downfall Videos Will Never, Ever End

The Internet is a Dark Abyss: Holocaust Fanfiction