The Mystics of Mile End and No. 4 Imperial Lane: Two Books That Reminded Me of Other Books

Is there anything new under the sun? Of course not. But my reading’s been particularly plagued by déjà vu recently, and I don’t know if it’s me, my choice of books, or something in the Halloween air conjuring narrative ghosts. Fortunately two occurrences is still a coincidence, not yet a trend. Novels remind us of other novels, and acute flashbacks are part of the normal ebb and flow, probably. I’ll worry about temporal instability if they persist. 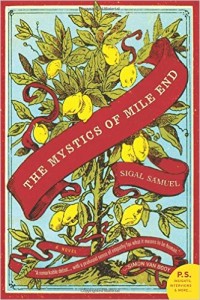 The Mystics of Mile End by Sigal Samuel

Remember Bee Season by Myla Goldberg, circa 2001? The mother’s crazy, the father ignores the kids, the brother falls in with the Moonies (or are they called something else nowadays?) and the sister garners her father’s attention by studying kabbalah with him in the service of winning spelling bees. Until kabbalah threatens her sanity, just like the sages warn you it will, and she matures and asserts her independence.

In The Mystics of Mile End, the mother is dead but the neighbors are crazy instead, the father ignores the kids (while having affairs with his students), the brother falls in with ultra-Orthodox Jews, then the father dies because his academic kabbalah research gives him a heart attack, so the sister picks up where he left off, treading into dangerous kabbalistic territory for the story’s climax.

The Mystics of Mile End languished on my desk for months because the summary on the back flap (of my advance reviewer’s copy—not necessarily the final form) utterly failed to entice me. (In the half-Hasidic, half-hipster Montreal neighborhood of Mile End, eleven-year-old Lev Meyer is discovering that there may be a place for Judaism in his life…. Years later, the children’s widowed father, David, a professor of Jewish mysticism, delves into the complexities of the kabbalah…. The neighbors of Mile End have been there all along, but only one of them can catch her when she falls…. I can’t even type this without my eyes rolling). Fortunately I flipped this debut novel open and gave it a chance before it got lost in my shelves. Samuel—as did Goldberg—approaches kabbalah sensually; the magic is visceral and plausible, with occasional atmospheric abstractions such as a library arranged geographically (see also: Bee Season, the mother’s storage facility). And in the wider realm of contemporary fiction, a twenty-something character finding herself spiritually rather than sexually is refreshing. 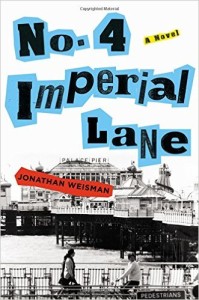 No. 4 Imperial Lane by Jonathan Weisman

Minor gripes first: I loved eighty-percent this veteran reporter’s debut novel, while the other twenty-percent irked me by wrapping a perfectly good wartime tragedy in a tiresome boy-gets-girl-he-thought-was-out-of-his-league fantasy. Also Weisman is prone to name-dropping eighties bands and showing off his Shakespeare. That said, No. 4 Imperial Lane‘s central tale about a sheltered British heiress running off to 1970’s colonial Africa with a Portuguese doctor she meets on vacation is terrific, and I don’t recommend such screenplay-friendly fare lightly. If Guinean warlords aren’t your usual genre you might have trouble keeping track of them, but that shouldn’t hamper your enjoyment of the entitled, doomed couple at the story’s core.

Now for my major gripe: why is this book narrated by a young man hired to care for the dying, bedridden brother of the heroine? To add texture and clarify themes, sure. The Portuguese empire fell, the British clan’s fortunes are falling. A simple metaphor demands more complex character growth, though, than figuring out how to charm the beautiful niece/daughter.

I’ll admit that barely-adult men taking jobs nursing invalid men as a literary device confuzzles me, to borrow a fun coinage from the tweens. Especially from the pens of middle-aged, Y-chromosomed authors, the odd-pair caregiving motif strikes me as wishful nostalgia. So call me cynical, jaded, a feminazi, whatever: while reading No. 4 Imperial Lane I was plagued by intrusive thoughts of Sayed Kashua’s Second Person Singular, which is half about a young Arab health aide assuming the identity of his Jewish patient, yet which rewarded my suspension of disbelief by ultimately tying its dueling halves together. Whereas No. 4 Imperial Lane answers an important question in its final pages only to soften the impact with a too-easy happy ending.

Nevertheless, I mostly liked the book, and if you don’t reactively scoff at a good guy seducing the bad girl, you might like it thoroughly.