The JLA as Seen by Fox News 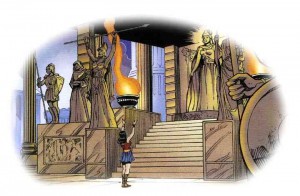 With the New York Comic Con this weekend in NYC, I began thinking about what my favorite news network would think of my favorite superheroes, specifically the The Justice League of America.  While I couldn’t get an interview with Greta Van or Bill O’Reilly, I am familiar with the Fox News mindset and corresponding lingo.  Here’s what I suspect Papa Bear and Rupert’s “blonde” mafiangels would have said:

Bruce Wayne would be a “job creator”, but Batman tends to undermine the work of the Gotham PD.  If he doesn’t support those heroes in blue, he must be “anti-American.”

Clark Kent would be a part of the “lame-stream media,” and Superman would have been a “terror baby.”

As a cop, John Jones would be a “brave hero,” but his alter-ego, the green-skinned J’onn J’onzz Martian Manhunter would be the quintessential “illegal alien,” and should therefore be deported.

Green Lantern keeps using his ring to make different weapons, he can’t stick to one! What a “flip-flopper!”

Wonder Woman has a “feminist agenda.” And as a pagan (recently revealed to be a daughter of Zeus), she’s part of the “War Against Christmas.”

The Flash wears red and yellow, and we all know what flag sports those colors. Betcha he supports “Obamacare.”

Aquaman always get the least credit, his views of humanity have always been more extreme than the other members of the JLA, and he wants to take us back to the Atlantian Gold Standard.  He’s clearly the Ron Paul of the group, so Fox News would ignore him.

And for those of you who make yours Marvel, stay tuned.  The Avengers edition is coming soon.