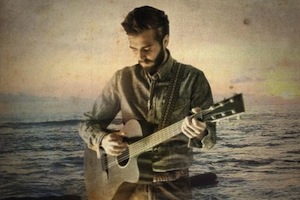 Ben Schneider, the frontman for the indie-folk collective Lord Huron insists that he took all the inspiration for the band’s debut Lonesome Dreams from adventure novelist George Ranger Johnson. Yet, George Ranger Johnson, despite the fact that he has a website devoted to his output, doesn’t actually exist.

Johnson is a creation, a vehicle for Schneider to channel a sensibility that wouldn’t necessarily come naturally to a kid raised in the perpetual winter of Michigan. And these “books,” based on a sampling of output, talk about praires, pistol-bearing wanderers, and wild animals that roam the desert at night in search of prey. Not the sort of thing you encounter ’round the Great Lakes, but Schneider has always been fascinated by the restless soul in search of adventure. Fascinated enough that he’s devoted his band’s aesthetic–including press photos, music videos, and general art direction–to the dusty feel of the cowboy spirit.

I spoke to the man behind Lord Huron about his band’s promising debut, the positive reaction its garnered, and, of course, Ranger Johnson, the man…or rather, the myth behind the record.

Where are you right now, Ben?
I’m in Los Angeles.

Having grown up in Michigan, what’s it like adjusting to the LA weather?
I do miss Michigan a lot in many ways. The weather is one of those ways—it’s nice to have sunny days, but I try to go Michigan to get a change of seasons.

Do you find that it’s harder to get inspired when it’s nice out all the time? Isn’t gloomy weather integral to songwriting?
I guess that could be true. But for me, it’s more about what’s going on in my life. The spookiness of winter in Michigan definitely did inspire my music. I don’t know if it’s getting harder or more difficult here in LA—but on the other hand, the more LA weather definitely influenced the desert elements of our music.

Tell me about the inspirations for your songs–I’ve read somewhere that you’re influenced by the adventure novels you read as a kid.
Shipwreck stories, stories about explorers. Those cheesy old novels. I’ve always had those in the back of my mind and I try to explore those sentimenets musically. Restlessness, exploration, and man against the elements. Man on his own. Those things influence me aesthetically.

Tell me about your dad because he introduced you to those adventure novels. But he was also a man of the world himself.
He grew up in Detroit in a big family and just as soon as he was able, he got out of there. He went to the navy to travel the world. He’s a writer, so because of him, I’ve always been interested in music and literature. I don’t know where he got those interests from or whether he was intentionally trying to impart it into me or not. But he did.

Every kid, at one point, freaks out about becoming too much want like his Dad. When did that happen to you?
There were times when I thought I don’t like what he likes, or vice versa. Like, he wasn’t into punk music when I was, and I was a really rebellious kid back then. But then you get older and get into the things you were exposed to as a child and then you realize how cool your dad was.

You were in a punk band? I can’t imagine…
Oh, yeah. We had a band in high school playing punk music. Punk reggae thing influenced by the Clash, then some of it was hardcore. On a practical level, punk music taught me a lot. How to play shows, how to write songs. It’s a different form, for sure, but these days I’m more interested in how things unfold and change. Repetition over time.

I was first exposed to your songs through a remix. Yet when I listen to your album, I don’t hear music that warrants a remix.
Artists approach you about remixing your song, and, you know, sometimes it feels right and sometimes it doesn’t. You put it in their hands, and in this instance it worked out great. I have a range of taste and I can appreciate a lot of pop.

So now that I know of your worldly interests, does that extend to what you’re listening to as well?
There are things that I listen to more than others. I really try to keep up on music, not all of it’s new. I love a 70’s Afghan pop artist named Ahmad Zehir, for example.

How did a boy from Michigan get into world music initially?
I started getting into it through movies. We had a great video store with a great international section. I would choose movies based on the covers and the music would always lead me down a different track. A lot of indian classical music, a lot of Bali music, Japanese, etc. From there, I started listening to West African music.

Your sound is so inherently…I hate to categorize here, but Lord Huron is very Americana.
I’m an American. And our music comes from an American folk tradition. I’m trying to put some spice into that American stew though by incorporating other elements, as well. At least, I hope.

What’s your lineage?
I’m pretty mixed. Irish/German/Czech. A little Welsh. Apparently a little Native American. I tried doing research but once you start looking at your ancestry in Europe, it gets difficult.

What were you like as a kid? I imagine you were precocious with your interests in adventure.
I was pretty curious. I liked music, but I never really learned how to play other people’s songs. I liked to write songs. I never learned any technique particularly well, either. I’ve got a lot of experience to do what I’m doing through trial and error. But I also know my limitations which is why I have a great band helping me round the edges.

So there are no spontaneous covers happening during the set?
I’ve learned some songs here and there. We have a few. I think on the next tour, we’ll play “Nebraska” by Bruce Springsteen. We’re also starting to play some Kinks covers.

Explain the concept for your backstory of the album, albeit through your creation the George Ranger Johnson.
The idea that all the songs on the album were inspired by a story. We’re going to keep going forward with that. There may be novels too some time down the road. But the idea for George Ranger Johnson was just to think about songwriting though in a way that has helped me flesh out the Lord Huron world a little bit.

You seem like a real retro-romantic…that it’s weird to even consider you’re active online.
When I was a kid one of my fav things about listening to music was the record sleeves. In it’s place, with the internet, listening to music can be more rich and more immersive. There’s still a lot of the room for the listener where we can craft this worlds through video and social networking. Personally, I don’t have a Facebook page or a Twitter account. Maybe I’m old-fashioned. But having it for the band, it’s important. The way you use it…it’s obviously beneficial.

Lord Huron has a very consistent aesthetic…very old-timey.
It’s been so important to me…it’s kind of this idea of the human experience laid bare against these sweeping landscapes. It’s a simple backdrop. That oldness feels pure and simple.

How would you respond to people who are critical of your aesthetic as a shtick?
We’re committing to our creative choices. We like to be as unapologetic as possible. No hard feelings on either side. If it doesn’t jive with your tastes, then to each his own. I just really feel strongly about committing to a vision and seeing what happens. At the end of the day, the people who get into it, get into it. And they’re important to us.
But I can’t really understand when people question the authenticity. Looking back at Bob Dylan, in terms of being authentic, he was authentic but he wasn’t inventing a sound, nor was he playing as himself. Bob Dylan was a creation of his. And who can say whether that’s authentic or not? It’s still great regardless.