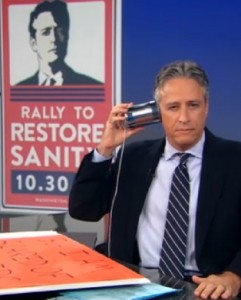 It is a well known fact that left-wing demonstrations in Israel are good for one thing and one thing only: picking up hot chicks. This is why my dad was so generous about driving me all the way to Jerusalem way back when for some hand-holding thing around the old city, and how can I ever forget that babe from the “Ratz” youth federation that got my brother (nowadays a Tea Party enthusiast living in Florida) all hot and bothered about civil rights for refugees?

I’ve never been a huge fan of Jon Stewart. Don’t get me wrong, he was great as Science Teacher Stabbed in Eye in “The Faculty”, but what’s he done since? I understand there’s a Jon Stewart recently voted most influential man in the universe or something, but that couldn’t be the same dude, could it? Regardless, I was informed via Facebook about the local chapter of Stewart’s “Rally to Restore Sanity and/or Fear” Saturday night at the Tel Aviv cinematheque and thought it sounded cute. One potential attendee cleverly pointed out that “There’s only one problem. How does one restore sanity to a part of the world where it never existed? I therefore propose calling the gathering in Israel the Rally to Introduce Sanity” (this was Gil Shefler, former classmate, ‘funny Gil’ in my cell phone memory).

Early comments on the event ‘wall’ revealed an ironic scheduling issue: the annual Itzhak Rabin memorial extravaganza was taking place at the exact same time, not 1 km away (yup it’s been 15 years since our prime minister received his own personal bomb package from Yemen… get it?). And if that wasn’t bad enough, there’s it-girl Dana Grotsky’s birthday bash at some new bar she’s co-owner of – Grotsky and I work together and she even dated a friend of mine for a few minutes, but ever since she appeared in nothing but a hand bra on the cover of the TV guide (like, two weeks ago), she’s gotten unbelievably famous. So we got the sad-lefty-hot-chicks at Rabin square, the ironic-lefty-hot-chicks at the cinematheque, and the politically-undefined-incredibly-hot-but-completely-unattainable-hot-chicks at Dizengoff. Braving the humid night, I throw on my best Mark Zuckerberg hoodie, mount my rusty bicycle, and set out to hit all three.

The Jon Stewart thing is dead. A so-called “French” pizza place next door actually attracts more people than our rally. Maybe half a dozen show up (there were 117 ‘attending’), mostly Americans (you can always tell by the loafers), one guy, swear to god, is sporting a fanny pack. In classic social network fashion, we don’t really know each other, therefore do not speak. I look for one of the organizers with whom I had a laconic exchange earlier in the day – he said there’s no big screen or anything, just a gathering, and no, they’re not interested in doing any press – but he’s a no show. A woman with green hair says “We could have stayed home and watched the live feed”. A pale guy has pulled up the profile picture of another of the event’s organizers, a cute girl, on his phone. “We should look for her”, he claims.

Had that pic mighty handy. Now I know why he’s here.

The entrance to the cinematheque is blocked by a music school percussion band, banging away, here for the international children’s film festival. This was in the news earlier: a bunch of Palestinian kids got stopped at a check point on the way to screen their film here. Turned back. Good job everybody. You want crazy? Crazy we got. The bass player in the band looks kind of Goth. Most of his band mates have long hair. That’s probably as rebellious as this party is going to get. In a year or two, they will all get drafted.

Shefler wrote that we need this sanity rally because “only those shouting loudest are the ones being heard”. On my way to Rabin, I am nearly crushed by the #63 bus, so I shout something about the driver’s mother, and he shouts back, louder. The police have closed down Ibn-Gabirol, and riding down the empty left hand side of the avenue is the best part of my night, but sadly “No two-wheel vehicles allowed at the square”, I am told by a cop, so bye-bye to the sad-lefty-hot-chicks.

Oblivious, the politically-undefined-incredibly-hot-but-completely-unattainable-hot-chicks do in fact show up in numbers at Grotsky’s bar in their micro skirts and stilettos. The entrance to the place is through the Israeli Dental Association building. Nice touch (girl does have some white incisors). But the line is so damn long, and the people such douches, so screw it, I’m going home (also, I’ll probably never get in).

Stewart and Colbert are all smug and all over my TV as I sit down to write. Word is we got another little war coming our way, set for right after those elections of yours, which means, I guess, next week, right? I’m not too worried – they told us to get ready for a war in the summer, maybe the big one, but nothing happened. Guess what the band was playing at the “Rally to Introduce Sanity”.

It was the theme from Mission: Impossible.