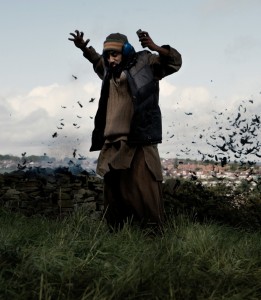 Chris Morris’s Four Lions is definitely different than most films you’re going to see this year (or this decade). It can leave you laughing out loud while simultaneously judging yourself for enjoying the experience so much. A farce revolving around a group of terrorists in the heart of England, this is clearly not a film for all tastes. The experience of the film is hard to describe. The closest I can get is suggest picturing an alternate film universe in which Kevin Smith wrote a dark as night black comedy about a gang of wanna be terrorists who didn’t quite know where to blow themselves up, had a collaborator contribute some social commentary on the war on terror, had a more visually oriented director helm the project — who in turn cast Ali G as one of the main characters. Still not quite right, but perhaps it gives a taste of the sort of absurdist satire to expect while watching the Four Lions.

Omar is the brains of the outfit, though the bar for that position is fairly low. Then there’s British convert Barry  with plenty of extremely questionable advice to dispense, Omar’s friend Waj who let’s Omar do all his critical thinking, and Faisal (the man with the plan to strap explosives on trained crows). The banter between the group is where most of the film’s humor lies, such as the revelation that Jews invented spark plugs as part of a conspiracy to control world traffic patterns (one of Barry’s more creative excuses for not keeping current on his auto’s maintenance properly). In short, these guys are idiots. Albeit dangerous ones.

Four Lions is well acted, the dialogue mostly very sharp and I stayed hooked all the way through. The film neatly exposes the obvious truth that terrorist groups are made up of people and that dealing with them probably requires understanding the spectrum of reasons why people would blow themselves up (not to mention intentionally murder). More importantly, it contributes to the international discussion surrounding terrorism while still being very funny. For me Four Lions was definitely one of the more creative (if sometimes emotionally confusing) things I’ve seen this year. I definitely recommend it, subject only to the black comedy caveat above.  Oh, and if you do go make sure to stay until the main credit roll. There’s a bit of final ironic wish fulfillment involved as one of Omar’s early serious blunders pays off in unexpected ways.